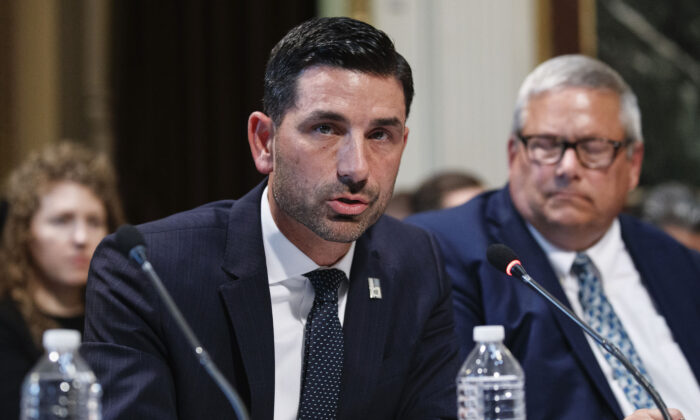 Acting Homeland Security Secretary Chad Wolf speaks during a meeting of the President's Interagency Task Force to Monitor and Combat Trafficking in Persons at the White House complex in Washington on Oct. 29, 2019. (Alex Brandon/AP Photo)
US News

According to The Associated Press, Wolf sent a memo to agencies including U.S. Customs and Border Protection, the Coast Guard, and the Transportation Security Administration regarding the new law, formerly known as The Driver’s License Access and Privacy Act.

In it, he requested a study on how it will affect the Department of Homeland Security’s activities into immigration, human trafficking, drug smuggling, and counterterrorism.

According to his memo, obtained by The Associated Press, Wolf said the department must be “prepared to deal with and counter these impacts as we protect the homeland.”

He also asked that each agency take account of what Department of Motor Vehicles information is already available, how it is used in daily operations, and what the security consequences might be without the DMV data.

In December 2019, New York became the 13th state to allow illegal aliens to apply for and obtain a driver’s license from the Department of Motor Vehicles under the bill commonly referred to as the Green Light Law.

It means that individuals aged 16 or older will be able to apply for a standard license, including those who have never been issued a Social Security number.

However, applicants must show a combination of documents that prove their name, date of birth, and New York State residency, which include a foreign passport, a U.S. municipal ID card with photo, and a foreign birth certificate.

In addition to providing illegal immigrants with licenses, many of these states also prohibit Department of Motor Vehicles officials from providing data to immigration enforcement agencies unless a judge orders it.

In a news release announcing the new law in 2019, speaker of the New York state Assembly, Carl Heastie, said it hoped to create safer roads and boost the state’s economy.

Heastie also dismissed fears raised by opponents of the law, including county clerks, who suggested that it may create loopholes for criminals to obtain a driver’s license and use it to commit bank fraud, identity theft, credit card fraud, human trafficking, and other criminal activities.

“While opponents continue to spread misinformation and stoke fears about the bill’s intent and consequences, the Assembly Majority will continue to put the needs of New Yorkers first,” he said.

“The legislation passed today will promote public safety, protect our state’s economy, and ensure every New Yorker can integrate into their community and care for their family. Making sure that every driver is trained, tested, and insured will make New York’s roads safer for everyone and ensure that our industries have the labor they need to keep our economy moving.”

Only 34 percent of voters supported the move. The poll has an overall margin of error of plus or minus 4.2 percentage points.

AP cited data from the Fiscal Policy Institute, which projects that approximately 265,000 illegal immigrants in the Empire State, the majority in New York City, will seek licenses under the new law over the next three years.

“The Trump administration takes the mission of protecting the Homeland very seriously,” DHS spokeswoman Heather Swift told AP, adding that these types of laws are unsafe and “make it easier for terrorists and criminals to obtain fraudulent documents.”