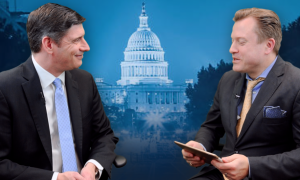 Robert Wasinger, a former White House liaison to the State Department who also served as chief of staff for former Sen. Sam Brownback (R-Kan.) for more than a decade, provided a unique insight into the president’s strategy.

Jan Jekielek: Hot off the Twitter press so to speak, Trump tweeted early [Jan. 30] morning, “Guaido is being targeted by the Venezuelan Supreme Court. Massive protest expected today. Americans should not travel to Venezuela until further notice.” So we have most of the Western Hemisphere supporting Guaido. But the situation is far from resolved. So can you give us a bit of an overview of where we’re at right now?

Robert Wasinger: Well, I think what’s happened is [former Venezuelan President] Hugo Chavez kind of set up a regime that was modeled after Cuba. As it’s taken root, it has become another socialist country, a communist country. And that always leads to violence at the margins. A lot of times, that becomes what’s normal. And you mentioned the [food shortages]; I guess on average, they’ve lost 19 pounds per person. So, it’s a real humanitarian crisis. Our allies in the region are supporting our action and recognizing Guaido as well. And you know, I think the danger is it becomes kind of a proxy war with Russia and China, depending on what the objectives are. But it’s certainly a humanitarian crisis that needs to be addressed and the Trump administration is doing the right thing because we can’t have those refugees spilling out into Colombia, which is an important ally of ours in the region, or Brazil, and destabilizing those countries, which terrorist organizations would take advantage of to further their own agenda items. So it’s a real crisis and the president is doing the right thing. Hopefully, we can bring it to a resolution very quickly.

Mr. Jekielek: So [on Jan. 29], U.S. national security adviser John Bolton warned of “serious consequences for those who attempt to subvert democracy and harm Guaido.” He’s been describing the Venezuelan attorney general, who has been targeting Guaido’s finances, as illegitimate. What do you make of these serious consequences? What does that mean?

Mr. Wasinger: I think, as we look at our foreign policy in Venezuela, the first action was taken by the Treasury Department on Monday by putting [the Venezuelan state-owned oil and gas company] PDVSA on the list and all the people associated with PDVSA, because what [Nicolás] Maduro has been doing is using PDVSA as his own personal piggy bank—so taking all the resources from this company and just looting it for his own purposes. One of the impacts of that decision is third-party transactions for financial arrangements used to all go through New York as of last week. But with our action this week by the Treasury Department, that’s all going to be put to an end. So that’s the first step. We’ll see if those sanctions have an effect; I think they will. And then you just judge what the next step is in the process. And I think all options are on the table as they should be.

Mr. Jekielek: How is this America-first foreign policy—what we have been told that Trump is pursuing—especially in the context of the recent announcement of the withdrawal from Syria?

Mr. Wasinger: I think a lot of people are asking that. I would say the first response is to our allies in the region, which are very important allies for us; and we can’t have another Cuba develop in Venezuela. So taking care of Colombia and Brazil and making sure they’re not flooded with refugees, which terrorist organizations, especially in Colombia, will take advantage of to create more chaos and confusion. Those are important objectives that really make America-first policy and even a priority. I think beyond that, you have to look at how Trump derangement syndrome, if you will, has set into the media and how they want to characterize all of his policies. They have a very reactionary, almost reflexive, view on everything, which is that he wants to withdraw from the global stage, he wants to get rid of all these organizations, not participate, and become insular. That’s not the case at all. What he’s doing is just resetting priorities and policies around the world, and putting American workers as the No. 1 objective that he has from a policy point of view. What you had under the Bush, Clinton, Bush, Obama era, which is all essentially one doctrine, was the United States would just kowtow to the global elite. Whatever the global elite wanted, we would do from a policy perspective. That’s what’s come to an end, and what the foreign-policy establishment in Washington just cannot stand or stomach is that we’re actually putting the interests of American workers first. And I think that’s certainly the case with Venezuela. We took on about 40 percent of their exports in oil traditionally before all of this. It’s a big, very resource-rich country. Their people are suffering and we have a very vested interest in remedying that situation, especially given the proximity and not wanting another Cuba or something like that to develop in the long term. But I think this all puts Trump’s policies, from a foreign policy point of view into some perspective, which is again America and American workers first, and getting rid of the global elites and their domination of the entire foreign-policy establishment.

Mr. Jekielek: So this isn’t actually America retreating off the world stage; it’s like a reshuffling of priorities?

Mr. Wasinger: I would say yes. I would never characterize anything that Trump’s done from a foreign-policy perspective as retreating or even isolating; the left in the mainstream media wants to portray it that way. But it’s a caricature; it’s a caricature that they want to propagate, but it’s not true at all. He’s very engaged in the Middle East, and obviously, his work in North Korea is substantial. He’s changing things and reassessing some old alliances, which, honestly, need to be reassessed. It’s a different world than it was [in the] last century and he’s taking it very methodically and putting out his own agenda items. And I think that’s what really sets him apart from the foreign-policy establishment, which again is why they’re just not able to get on board with most of his agenda items.

Mr. Jekielek: Russia and China are actually taking—I think you can convincingly argue—positions on Venezuela that challenge the U.S. position, and most of the Western Hemisphere’s position. And, of course, the United States is also embroiled in sensitive negotiations, especially with China on the trade side and other areas. And then there’s this nuclear non-proliferation treaty that the Trump administration is targeting with respect to Russia, and again other issues as well. Does Russia and China’s position on Venezuela give them more leverage? Does that change the discussions somehow, and make it harder for the administration to affect what it wants to?

Mr. Wasinger: I don’t think it makes it any more difficult for the administration. You’ve got to be careful that these things don’t turn into some proxy fight that’s relatively harmful. I don’t think that’s the case, though. It’s funny for the mainstream media that wants to portray Trump as being in the back pocket of Vladimir Putin and how often he’s actually going directly against the interests of Putin. This is just the latest example on that. The great thing about Trump is he’s going to put America workers and America first. And it doesn’t matter who the other countries are or what they want. His objectives are clear and it’s not surprising for people to make promises, then keep them. That’s basically all he’s doing. He’s just keeping the promises he made during the campaign, which again sets him apart from most politicians in Washington, because he’s not a politician.

Mr. Jekielek: So what would do you expect? What would you think we’re going to see happen next?

Mr. Wasinger: I am not totally sure. We’ll see if the sanctions on PDVSA work, if we can maybe cut out some of [Maduro’s] resources and his financial ability. A lot of the shipments, by the way, they’re going to China. He’s not making money off those shipments, that’s just reclaiming assets that China had already contributed to Venezuela. So there’s not a lot of money flowing in and the inflation is out of control. For a country so resource-rich to have over 90 percent of the people in absolute poverty is really a humanitarian crisis that has to be addressed. One other thing is just a reminder for people that in domestic politics, we’ve seen the future of socialism and this is what it is. So for [Alexandria] Ocasio-Cortez and other new Democratic Socialists, this is what the end result of their philosophy brings and it’s terrifying. It’s terrifying for people, it’s bad for government, and everybody suffers under those circumstances.

Mr. Jekielek: What I’ve heard said when people make this comparison is “Well, those folks aren’t really practicing socialism. It’s not really socialism, it is something else.”

Mr. Wasinger: It might be an amalgamation of socialism and communism, but it’s a distinction without a difference. If you look at what some of these new Democratic Socialists are talking about, it’s exactly what Maduro is doing. So I’m shocked when any of them even step out and complain about what’s happening in Venezuela, because it smacks of absolute hypocrisy.

Mr. Jekielek: We’ve seen a lot of sanctions against Venezuela over time, right? Generally, it’s accepted that Maduro was not elected in a legitimate way. How are these new sanctions … how has the game changed, the sanctions game changed?

Mr. Wasinger: The sanctions this time are on PDVSA and various partners with PDVSA persons and people companies. In the past, when we did the sanctions, they were on individuals so it didn’t have the same effect on PDVSA. This time, it’s on PDVSA, and the big thing are those third-party transactions that go through New York every time there’s an oil deal. And so those are in place now. So they’re locked out of the financial network in a way they never have been before. That’s only about four or five days old at this point, so we’ll see the full effect of that unwind and we’ll see the results of that in the next few weeks. Then, I think Bolton and the national-security establishment could reassess the situation, to see what steps might be needed and what the next steps are.

Correction: A previous version of this article incorrectly stated the date when President Donald Trump sent a tweet on Venezuela mentioned above and the date when national security adviser John Bolton warned of “serious consequences.” Trump sent the Tweet on Jan. 30 and Bolton made the statement on Jan. 29. The Epoch Times regrets the error.