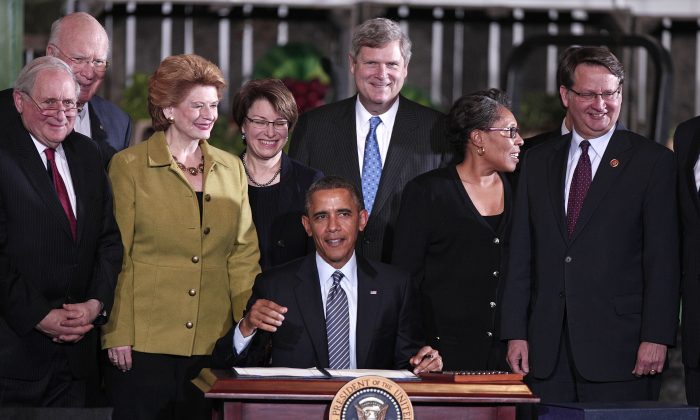 On Feb. 7, President Barack Obama signed the Agriculture Act of 2014, better known simply as the Farm Bill. At over 950 pages, the long awaited omnibus spending package got mixed reviews from farmers and agriculture experts.

For many lawmakers, the new farm bill is about saving money. Three years of debate and difficult compromise has produced legislation that reduces spending by about $23 billion.

While food stamps and conservation see big cuts under the new law, the majority of savings—$18.1 billion—comes from reform to farmer assistance programs and an end to direct payments.

According to Art Barnaby, agricultural economist at Kansas State University, the thinking behind the new federal assistance package is to focus on catastrophic coverage, “much as we do for hurricanes and other things.”

“In the case of direct payment, that just paid [farmers]. It didn’t require them to do anything,” said Barnaby, who led a webinar on the Farm Bill on Feb. 21.

According to Dr. Justin Gardner, associate professor of Agribusiness at Middle Tennessee State University, the new reforms are just a small part of a larger legislative trend. He said the big win of the new Farm Bill goes to insurance companies.

“The logic of the Farm Bill has always been about providing a safety net when we have droughts and bad floods, or if prices take a massive dip,” he said. “What we’re seeing is a moving away from taxpayers directly subsidizing that, to a situation where the taxpayer is now subsidizing an insurance company.”

When it comes to maintaining high prices, however, Gardner says it’s all about the ethanol mandate.

“I think what’s really driving high end prices right now is that we’re putting a very significant amount of our corn crop into ethanol,” he said. “That’s going to keep prices for other crops up because corn competes for that same land and it’s the highest valued crop. It’s going to keep beef and pork and chicken prices up because those are feed inputs that drives up the cost.”

Gardner adds that if farm policy turns away from ethanol “the bottom is going to really fall out. And then the commodity programs in the Farm Bill get to be even more relevant.”

The Farm Bill has a massive reach, but many farmers see nothing from it. While assistance and policy focus almost entirely on livestock and commodity crops, many fruit and vegetable growers are left out of the fray.

According to Derek Peterson, CEO of Terra Tech, this makes it hard for domestic produce growers to compete. That’s because foreign growers both north and south of the border receive government support, they can sell many fruits and vegetables at a fraction of local farmers.

“They’re able to ship it down here and actually compete with the stuff that’s grown next door. It’s frustrating and it’s difficult,” he said.

Peterson has plans for a future lobbying effort that calls for greenhouse growers like himself to get some of the support that corn and livestock farmers now enjoy.

“[Lawmakers] need to start becoming more supportive,” he said. “I mean, there’s a reason Carl’s Jr. can charge 99 cents for a hamburger, french fries, and a coke. You can’t go out and eat a meal of locally grown vegetables for anywhere near that.”

Terra Tech’s focus is on sustainable agriculture. Peterson sees great potential for his company in the Farm Bill in its support for growing hemp. Terra Tech has plans to grow over 100 acres of hemp near Belvidere, N.J., just along the Delaware water gap.

The Farm Bill provision permits farmers to grow non-psychoactive cannabis in states that have the appropriate legal structure. Unfortunately for Peterson, New Jersey is not one of those states. Gov. Chris Christie would not approve a recent measure.

However, because of hemp’s sustainability and enormous market potential, Peterson said he may still push toward a New Jersey crop.

“Entrepreneurs like us are determining whether or not we’re even going to wait for the law to pass. I look at it from the medical cannabis side of things and think, well, we’re all willing to operate medical cannabis companies in legal states even though it violates a federal law. So why wouldn’t we be willing to take that risk of growing something as benign as hemp when it passes from a federal standpoint even though it hasn’t passed the state?”