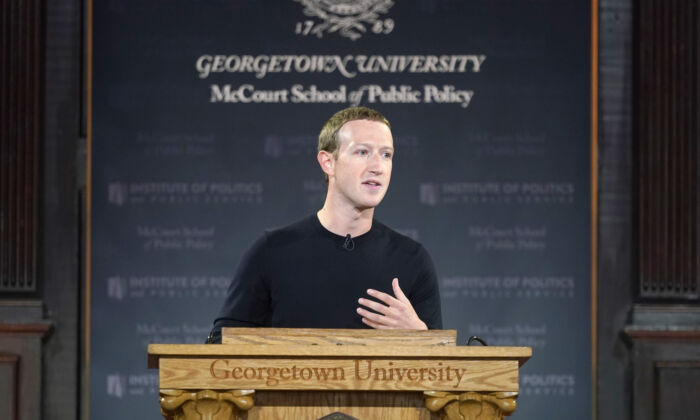 Facebook founder and CEO Mark Zuckerberg—who in the past openly pandered to Chinese officials, likely in an effort to ensure the social media giant’s entry into the Chinese market—recently made a speech at Georgetown University in which he criticized the Chinese regime for its internet censorship, striking a remarkably different tone.

Chinese state-run media reported that back in December 2014, when Lu Wei, then head of China’s chief agency for overseeing internet censorship, the Cyberspace Administration, visited Facebook headquarters, Zuckerberg gave him a warm welcome.

“Zuckerberg accompanied Lu on his Facebook campus visit, and introduced himself to Lu in Mandarin Chinese,” the report said.

Zuckerberg also invited Lu to sit at his office desk, where he had placed a book authored by Chinese leader Xi Jinping.

“I also bought this book for my colleagues and I want them to understand socialism with Chinese characteristics,” the report quoted Zuckerberg as saying.

“Chinese is hospitable, but I have the right to choose who can be my guests,” Lu said. “I can’t change you but I can choose who is my friend. I hope [all companies who] enter Chinese market are real friends.”

Lu has since been sacked by China’s corruption watchdog and sentenced to 14 years imprisonment on graft charges.

During Zuckerberg’s 2016 visit to China, he happily jogged on the streets of Beijing on a smoggy morning. And when Xi visited the United States in 2015, Zuckerberg met with Xi in person, dressing up in a sharp navy suit for the occasion, instead of his usual hooded sweatshirt or T-shirt.

In July 2018, his efforts appeared to bear fruit. Media reported that Facebook received a permit to operate a subsidiary in Hangzhou City in eastern China’s Zhejiang Province. But Chinese authorities revoked the approval within several hours.

The New York Times quoted “a person familiar with the matter who declined to be named,” who said Facebook received permission from the local government, which angered the central government’s Cyberspace Administration because it “had not been consulted more closely.”

Zuckerberg delivered a speech at Georgetown University on Oct. 17, in which he talked about China’s internet censorship.

“China is building its own internet focused on very different values,” Zuckerberg said, noting that the Chinese regime “is now exporting their vision of the internet to other countries” through popular China-developed internet platforms.

He added that censorship rules similar to China’s are also being adopted by other countries. “We’re increasingly seeing laws and regulations around the world that undermine free expression and people’s human rights. These local laws are each individually troubling, especially when they shut down speech in places where there isn’t democracy or freedom of the press.”

He said that such censorship was “one of the reasons we don’t operate Facebook, Instagram or our other services in China.”

Zuckerberg gave the audience an example.

“While our services, like WhatsApp, are used by protesters and activists everywhere due to strong encryption and privacy protections, on TikTok, the Chinese app growing quickly around the world, mentions of these protests are censored, even in the U.S.,” Zuckerberg said.

U.S. scholars have in recent years warned about the security risks of using WeChat, China’s most popular social media platform, urging the U.S. administration to impose sanctions on the company.  It has also attracted scrutiny over its lack of privacy protections and its role as a tool to influence Western elections.

WeChat’s developer and owner, Chinese tech giant Tencent, said that the app has a total of over 1.1 billion monthly active users.

The Epoch Times conducted tests on the app in August and found out even for WeChat users located outside of China, the app bars several Chinese-language, U.S.-based media outlets known for their coverage of the communist regime’s abuses, including the Chinese-language edition of The Epoch Times, Epoch Times affiliate NTD, Voice of America, and Radio Free Asia.

Heng He, a U.S.-based China affairs commentator, told the Chinese-language Epoch Times that the Chinese regime’s propaganda tactics outside of China were two-fold: promoting news favorable to Beijing, and suppressing information that casts the regime in a negative light.