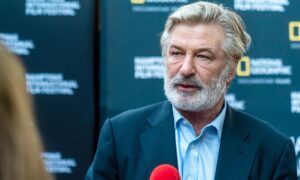 Duane ‘Dog the Bounty Hunter’ Chapman Says His Wife Has Gone Back to Colorado Against Doctor’s Orders: Report

Duane “Dog the Bounty Hunter” Chapman and his wife, Beth Chapman, said they have gone back to their home in Colorado—days after she was rushed to a Los Angeles hospital for emergency surgery.

“They say the cancer follows the path of least resistance, so it goes downward. Half of her lung was full of water,” Duane Chapman told Us Magazine on Dec. 2. “But she’s much more comfortable now [that] she can breathe, but she just wanted to come back to Colorado, she loves it here.”

The report claimed she left the Los Angeles hospital against the wishes of her doctor.

“They told us they didn’t want her to leave the hospital, but she was adamant, she just wanted to be home,” Chapman explained. “We have the test results coming in tomorrow.”

He added: “Beth slept for almost an entire day, and she was more comfortable, then she got up and she was trying to do things around the house, trying to do laundry and wash the dishes, I said to her, ‘I’ve done all that, don’t worry.’”

Chapman said she’ll get the results of a biopsy soon. “Yes, I’m nervous about the test results tomorrow,” he told the publication. “It’s like you kinda know what’s gonna happen, but you’re hoping and praying it’s not.”

In September 2017, Beth revealed she had stage II throat cancer. “After months of a nagging cough, a routine checkup resulted in a diagnosis of stage 2 throat cancer,” she wrote at the time. “I have what is referred to as a T2 Tumor in my throat that is blocking my breathing. My doctors are suggesting immediate treatment and surgery before the disease progresses.”

According to reports in late November 2018, her cancer appears to have returned.

“She had a lump in her throat twice the size of last time, and they performed an emergency surgery yesterday,” Dog told Us magazine after this week’s procedure. “They cut a hole in her throat so she can breathe; she can still talk. … [She’s] doing the best she can and remains incredibly strong.”

Previously, the two have credited their faith for her beating cancer the first time.

Duane, earlier this year, said he would help hunt down a fugitive who made threats against President Donald Trump.

He was hired by a friend of the then-fugitive, Shawn Christy. “I have a very hot lead,” Chapman told a local news outlet time. “I have delivered messages to him. My goal is not to shoot him but get him to surrender.” Christy was later captured by U.S. Marshalls.