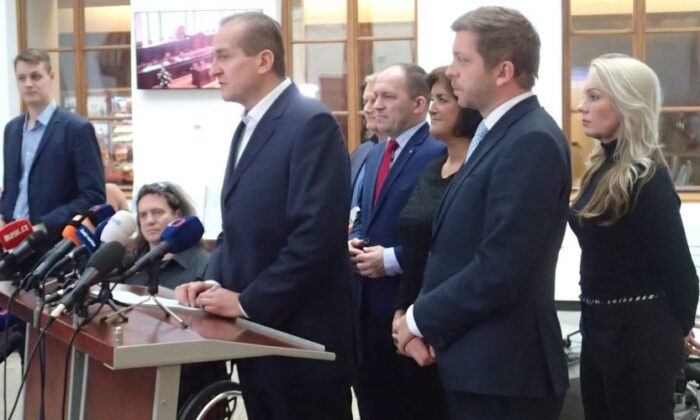 PRAGUE—Five political parties have raised serious concerns about the persecution of dissidents and religious or ethnic minorities in China at the plenary session of Czech parliament’s Chamber of Deputies.

They also want to discuss the results of an independent people’s tribunal in London, which confirmed the Chinese regime was killing prisoners of conscience en masse for their organs for transplant.

The parties submitted a draft resolution on Nov. 28 condemning gross human rights violations in China, drawing particular attention to the communist regime’s decades-long persecution of adherents of the spiritual discipline Falun Gong and other religious and ethnic groups.

The Czech senate passed a similar resolution in March.

At a press conference on Nov. 28, representatives of the political parties and Czech figures made statements explaining their motives and the urgency of the situation in today’s China.

Virtuoso Jitka Hosprová and actor Jan Potměšil spoke on behalf of Czech celebrities. Both  have been interested in the human rights situation in China since 2011, when together with prominent Czech singer Marta Kubišová, they held a concert in support of imprisoned Chinese lawyer Gao Zhisheng and Falun Gong practitioners.

“I don’t believe that the intelligence of the Czech nation has changed enough to lose the compassion and understanding for people who need it. When we were alone in those difficult moments of our history, the people outside did not forget us either,” says famous Czech virtuoso Jitka Hosprová.

“I think it is essential, in the period when we commemorate the 30th anniversary of the overthrowing of the Communist dictatorship in our country, to realize that the democratic world helped us during that time,” said actor Jan Potměšil.

“Whether it is the imprisonment and torture of political opponents, religious and ethnic minorities, or the illegal procurement of organs in the People’s Republic of China, it is absolutely necessary for the Chamber of Deputies to comment on this crucial issue,” said MP Vít Kaňkovský.

“We urge the Chamber of Deputies to not exchange moral values ​​for economic benefits and adopt a resolution expressing its opposition to the appalling human rights violations of prisoners of conscience in China,” said the representative of the local Falun Gong association, Martin Samek.

“Organ removal and human rights violations are not abstract words. Behind these terms there are specific people whose organs have been monetized, and their families do not even know where the remains of their bodies are,” said MP Olga Richterová, who has also sought an amendment to the Transplant Act in response to the regime’s organ transplant abuses.

“Be it Falun Gong followers, Christians, Uighurs, Tibetans and others. The forms of human rights violations in China are really horrific. Organ removal, executions, persecution. It is good for us to remember that it is China we are doing business with. That it is China, whose influence is significantly increasing not only in Europe,” says MP Helena Langšádlová.

“We are a country that carries the legacy of communist totalitarianism, an insane legacy. If we are to limit our diplomacy to economic interests thirty years after we were able to rid ourselves of the horrors, we will simply not live up to our country’s tradition,” said MP Vít Rakušan.

“We really must not be silent on this matter,” said MP Marek Výborný. “We are really paying the debt here. All dissidents persecuted before 1989 in the Czech Republic greatly appreciated the similar support they received from abroad. ”

Czech lawmakers are also discussing an amendment to the Transplant Act intended to address organ transplant surgery practices in China. The proposed amendment is the latest in a growing movement against involuntary organ harvesting from prisoners of conscience in China and human trafficking on a global scale.

The amendment would enable the prosecution of an organ transplant patient who obtains an organ from an involuntary donor. It would also identify the countries to be banned from participating in organ transplantation, particularly China.

In recent months, relations between the Czech Republic and China have soured. Problems have arisen in the political sphere and in the areas of cyber security, entrepreneurship, freedom of speech, and also with asylum seekers from China.

For example, the Prague City Council on Oct. 7 decided to terminate its partnership agreement with Beijing in protest against a provision related to the Chinese regime’s “One China” policy.

A few months earlier during a visit to Taiwan on March 29, Prague Mayor Zdenek Hrib told the local media that he was being pressured by the Chinese regime to cancel a meeting with the Taiwan envoy in Prague, which it considered “unacceptable.”

In response, the regime canceled a planned 14-concert tour by the Prague Philharmonia in China.

Minister of Culture Lubomir Zaoralek noted the deepening rift between the city of Prague and Beijing, which has resulted in the cancellation of several cultural events involving Prague ensembles in China.

In his sharpest rebuke yet, Zaoralek told the Chinese ambassador there would be no cultural exchange if Beijing were to cancel the events, which included a series of concerts by the Prague Quartet, and the Prague Radio Symphony Orchestra, in addition to the Prague Philharmonic.

In late 2018, the Czech cyber watchdog identified Huawei as a security threat. The Chinese tech giant threatened to take it to court and initiated international arbitration for “damaging” the firm’s reputation.

In a Feb. 7 letter addressed to the independent governmental body of the Czech National Office for Cybernetics and Information Security (NUKIB), as well as Czech Prime Minister Andrej Babis, Huawei called for the “cancellation” or “modification” of the warning issued by NUKIB in December 2018, which identified Huawei and its Chinese competitor ZTE as “security threats.”

The Czech Republic, which has considerably increased its political and economic cooperation with China since 2014, has also been shaken by uncertainty surrounding the Chinese conglomerate CEFC China Energy. While CEFC had promised to invest tens of billions in the country, the company collapsed.

CEFC’s much-lauded Czech investment came to a swift end after its director, Ye Jianming, was reportedly detained by communist authorities in China and under investigation for economic crimes. Then the company’s assets were liquidated to repay its loans inside China and abroad.

According to Czech think tank Sinopsis, “apolitical behavior” by foreign parties is no longer sufficient for the Chinese regime.

“The Chinese Communist Party now requires open, public and unambiguous support – from its own companies, artists and citizens, but increasingly also from foreign actors,” wrote Sinopsis.

President of the Czech Senate Jaroslav Kubera, despite protests by the Chinese regime, decided to make a planned visit to Taiwan at the beginning of next year, Czech Radio said. In response to his decision, China announced that it was postponing the planned Czech-Chinese Business Forum. Czech media said that Chinese authorities indicated to Prague Castle representatives that the reason for postponement was due to the actions of the Senate chairman Jaroslav Kubera and Prague Mayor Zdenek Hrib.