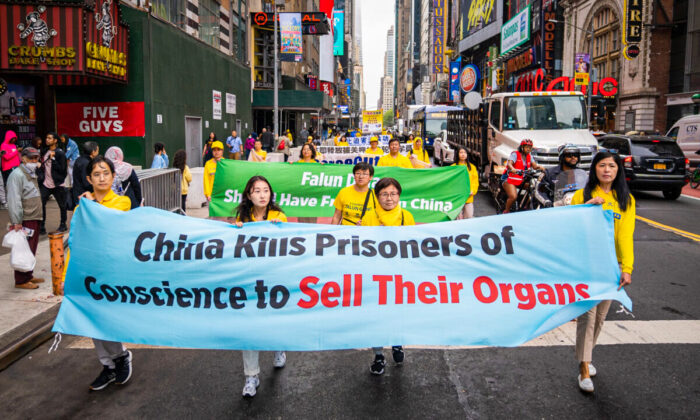 Falun Gong practitioners take part in a parade marking the 30th anniversary of the spiritual discipline's introduction to the public, in New York on May 13, 2022. (Samira Bouaou/The Epoch Times)
Organ Harvesting in China

A former Japanese criminal gang member says he was a witness of China’s live organ trade, having seen an anesthetized Falun Gong adherent—with tendons cut to prevent his flight—shortly before the man was placed on an operating table to have his liver carved out.

That was in August 2007, when Ushio Sugawara, now 58, was still a member of the Sixth Yamaguchi-gumi—Japan’s largest crime syndicate. He left the gang in 2015 and is now an economic commentator in Japan.

His friend’s brother was desperate for a new liver to sustain his life. With strict regulations, high costs, and long waiting times in the United States and France—two of the few countries offering liver transplant surgeries at the time—the struggling patient turned to what appeared to be his only alternative: China.

At the time, Beijing’s General Hospital of the Armed Police Forces, a state-run military hospital, had risen to become a national leader in liver transplant surgery.

A Chinese broker who facilitated medical tourism with Japan put the brother in touch with the Beijing hospital. Within a month, they had a suitable donor, telling the patient to fly over for surgery “anytime.” The price was 30 million yen (roughly $255,000)—not even half the cost of what they’d been told in the United States and France.

‘Contribution Before His Death’

Sugawara, in an interview with The Epoch Times, recounted how he became involved after the family found that the quality of the hospital’s albumin, a protein produced by the liver that is infused during the surgery, wasn’t up to par. He helped them buy the solution in Japan to smuggle into Beijing, with the sanction of the Chinese hospital.

The day before the scheduled surgery, Sugawara visited the patient and learned that the donor was in the next room.

“Would you like to have a look?” suggested a Chinese doctor fluent in Japanese, drawing back the curtain to reveal a 21-year-old man. The man was unresponsive due to being anesthetized.

“What kind of a person is he?” Sugawara asked.

The doctor, in response, claimed the man to be a “bad person” and a death row prisoner.

“That was when I realized that China uses prisoners for organ harvesting,” Sugawara said.

“He will die sooner or later, and this way, he can make some more contribution before his death,” the doctor said. He then branded the man as a “terrorist group member.” Pressed by Sugawara on what the man did, the doctor answered that he was “Falun Gong.”

The spiritual discipline Falun Gong, whose teachings are based on the principles of truthfulness, compassion, and tolerance, was vastly popular in China in the 1990s but came under a nationwide persecution under the Chinese Communist Party in 1999. In the decades since, millions of adherents have been arrested and subjected to various forms of abuse designed to decimate their faith.

Concerns that the regime may have been harvesting organs for profit first surfaced in 2006. Multiple whistleblowers that year approached The Epoch Times offering testimony about the illicit practice. Annie (a pseudonym), who worked at a Chinese hospital in northeastern China, said that her ex-husband, who was a brain surgeon at the same facility, and other doctors removed corneas and other organs from living Falun Gong practitioners before throwing the bodies into incinerators, sometimes while they were still alive.

A 2019 London-based independent panel, known as the China Tribunal, concluded beyond reasonable doubt that the regime had been killing prisoners of conscience and selling their organs. Falun Gong practitioners, they found, remained a primary victim group.

In early May, the European Parliament approved a resolution condemning the regime’s organ harvesting, calling it “persistent, systematic, inhumane.”

“The doctor said that with so many people in China, they can find as many donors as needed,” Sugawara said.

“China has a lot of bad people,” the doctor told him. “They will have to die anyway, so we should make good use of them.”

The surgery ultimately failed, and the patient died during the operation, along with the donor.

Sugawara was escorted out of Beijing airport by a senior official and four armed police officers when he landed with the albumin. He had been held for several hours by customs officers who had detected the albumin solution in his checked luggage, since it wasn’t allowed into the country without a special permit.

A customs official came to stamp his passport as he was taken through a VIP immigration lane. He was then whisked away in a black luxury Lexus.

The special treatment he received was one sign of the active part that Party officials played in the regime’s organ harvesting industry, Sugawara said.

“The broker said that they couldn’t proceed without officials’ participation,” he said. “There’s no way they could balance the complicated relationships.”

The man who Sugawara saw had bandages around his hands and feet. He remembers the doctor saying they had cut the tendons on the donor’s limbs a day earlier, in part to keep him from fleeing.

The cutting of the man’s tendons “reflects the brutality” of the doctors, according to Torsten Trey, executive director of the medical ethics advocacy group Doctors Against Forced Organ Harvesting.

“No doctor who follows the medical oath would do that,” he told The Epoch Times. “If they can cut tendons, they can also remove organs without consent. It is a ‘medical barbarism.'”

He believes it’s possible that the doctors “wanted to avoid application of muscle relaxants to ensure better quality of the organs.” Cutting the tendons, he said, could “suppress the resistance of the muscles, which makes it easier to remove the organs.”

“The fact that the doctor was initially framing the donor as a terrorist in order to justify his act of harvesting organs is despicable, in particular as he later admitted that it was a lie and that it was a healthy Falun Gong practitioner,” Trey said.

By cutting the tendons, the doctors were “basically creating an artificially created paralysis,” Trey said, adding that such an act “is cruel and should induce in any doctor a strong reaction of dismay.”

The World Organization to Investigate the Persecution of Falun Gong (WOIPFG), a New York-based human rights group, has identified the General Hospital of the Armed Police Forces as one of the worst offenders involved in many suspected cases of organ harvesting crimes. In WOIPFG’s undercover phone calls, at least one transplant surgeon from the hospital admitted to sourcing organs from Falun Gong practitioners.

“We have plenty of organs,” said Wang Jianli, the deputy chief surgeon for the hospital’s organ transplant research institute, when asked by one investigator posing as a patient’s family member in search of a liver. He said that one to two weeks was “about right” for them to arrange a surgery.

“Right, right, right,” Wang said in November 2018 when asked whether the organs they used were “the Falun Gong healthy organs.”

The short timeframe for securing a suitable organ in China—such as matching a liver within one month, as in the case of the brother of Sugawara’s friend—should also raise alarm bells, Trey said.

It’s “a very short time frame that is unusual for an altruism-based organ donor program in the West, yet quite common in China’s transplant market,” he said.

The passage of time hasn’t lessened the sense of cruelty that Sugawara felt about what he witnessed.

“They thought they were doing the right thing. They were all brainwashed,” he said.

The Japanese edition of The Epoch Times contributed to this report.