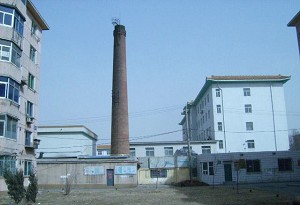 Human crematorium: The furnace unit on the southwest side in the Sujiatun Concentration Camp, where a witness says Falun Gong practitioners are cremated after their organs have been removed for sale. She learned from her ex-husband, a surgeon in the concentration camp, that the practitioners are still alive during organ removal. (The Epoch Times)
China

New information from a witness and an NGO report has shed new light on the practices and facilities of the mysterious Sujiatun Concentration Camp and its treatment of Falun Gong.

Interviews with the ex-wife of a surgeon involved in organ transplants at the hospital connected to the Sujiatun camp, which is said to be secretly harvesting organs from Falun Gong practitioners, show some of the brutal measures used by the camp in its treatment of the practitioners illegally detained there. This new information follows on the heels of an early March Epoch Times interview with a Chinese journalist, who first revealed the existence of the Sujiatun concentration camp and said that 6,000 Falun Gong adherents were imprisoned there and were killed for their organs.

The testimony of the Chinese journalist and this informant, along with ongoing investigations made by a U.S.-based human rights NGO, are the first reports detailing this type of camp since 1999, when the former leader of the Chinese Communist Party (CCP), Jiang Zemin, launched the persecution against the peaceful and popular Falun Gong meditation practice in China.

The witness said that most disturbing to her was that her ex-husband told her that organ removal in Sujiatun is often carried out while the victims were alive. This is to ensure freshness and maximum functioning of the organs for transplanting.

According to the witness, the hospital has removed many kidneys, livers, corneas, and skin from Falun Gong practitioners. After organ removal, the practitioners' bodies are thrown into an incinerator, which was converted from a boiler. Their ashes are dumped together with burned charcoal to conceal the evidence.

She said that her ex-husband specialised in removing corneas, adding that, “Major targets of cornea removal were the elderly and children.”

The witness stated that her ex-husband had a mobile phone specifically for this procedure. Whatever the time or place, as soon as the phone rang, he would go to perform the operation. During the two years of working at Sujiatun, he did several cornea removal operations per day.

“As a Chinese, I feel quite sad. This is Chinese killing Chinese. It's unlike the slaughter in Nanjing when the Japanese invaded China. This is killing our own fellow people,” she said.

The woman stated that out of the 6,000 practitioners first detained in the death camp there are now only an estimated 2,000 that remain alive.

When asked why the concentration camp could remain so secret, the woman said, “Because several people share the profit. So they won't tell others.” She also pointed out that Sujiatun is located in a rural area of Shenyang, and that although the hospital was quite famous, only patients seeking treatments for heart and thrombi diseases would go there, and therefore the location is not entirely public.

According to the woman, many doctors within the hospital know of the continuous murder of Falun Gong practitioners for their organs, but choose to remain silent. “A lot of people who work at Sujiatun are from families of high-ranking cadres. We have formed this habit since a very young age: do not ask anything that's not relevant to us,” she said.

The woman said the Falun Gong practitioners were first held in a one-story residential house, which was dismantled around 2003, adding that “we guessed that there was an unknown basement [in the hospital].” She understood that the basement was part of the Sujiatun Concentration Camp.

The camp, according to a report published by the NGO World Organization to Investigate the Persecution of Falun Gong, is built underground in the remains of an unused civil air defence facility, and is connected through an exit to the Chinese Medicine Thrombosis Treatment Centre in Shenyang City in Northeast China.

The detainees were transferred to the secret “basement” area, while the existence of the original facility was denied. “[The authorities] will not admit there was once that one-story residential house. They might say that it was built for peasant workers or the homeless.”

Toward the end of the second interview published on The Epoch Times website, the woman gave her reasons for revealing the information: “Now we expose this to the world. At least a portion of the people there can still survive. I don't care if they admit it or not. Exposing it will deter these evil actions.”

Drawing on sources within China, the report released by WOIPFG stated the Sujiatun death camp is being steered by provincial-level Communist Party officials in Liaoning Province, as well as Shenyang City officials. Particularly involved are managers in health bureaus, who stand to gain the most financially. The report portrays an efficient machine driven by profit and a confidence born of state backing. The camp is described as running “a systematic procedural practice” that began as early as 2001.

According to WOIPFG president John Jaw, most of the Falun Gong practitioners believed to be held in the Sujiatun camp were likely arrested on extrajudicial grounds and administratively sentenced. “They have been detained for their affiliation with the Falun Gong, as opposed to having committed some sort of criminal act,” he said.

Numerous reports have been documented by Amnesty International and Human Rights Watch of abuse and torture against Falun Gong practitioners inside China. According to the official Falun Dafa Information website, 2840 practitioners are confirmed to have been tortured to death within China's vast Labour Camp (Laogai) system. However, reliable sources inside China put this figure at 10,000 or higher.