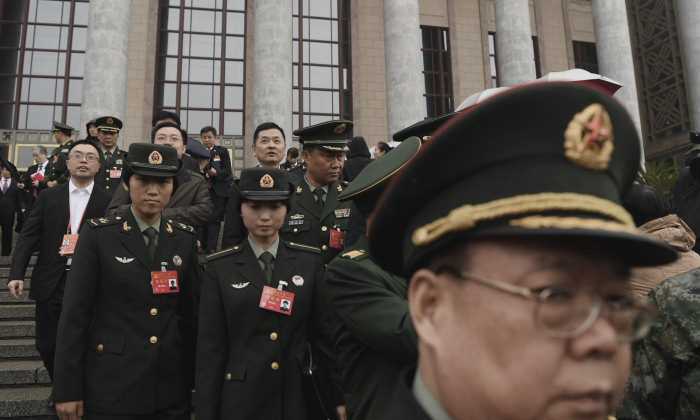 Chinese military delegates leaving the opening ceremony of the 19th National Congress after it concludes, in Beijing's Great Hall of the People on October 18, 2017. (Greg Baker/AFP/Getty Images)
Chinese Regime

With much focus on the 19th National Congress and who Chinese leader Xi Jinping will appoint to the party’s top leadership positions, a Chinese official has quietly provided clues to the scale of Xi’s anti-corruption probe into the Chinese military in the five years since he took power.

Speaking at a news conference on Oct. 19, a day after the opening day of the congress, Yang Xiaodu, China’s Minister of Supervision, said there have been investigations into 440 high-level Party officials who either held a provincial-level military position or were directly under the supervision of the central authorities, since the 18th National Congress when Xi was appointed leader of the Chinese Communist Party (CCP).

Between 2013 and June 2016, the number of disciplined officials totaled 913,000, according to the CCP’s disciplinary body, the Central Commission for Discipline Inspection.

Xi has embarked on an anti-corruption campaign aimed at purging his political enemies—namely, officials who are loyal to former Party leader Jiang Zemin. And to consolidate his power, Xi has gone relentlessly after enemies in the military, including Guo Boxiong and Xu Caihou, both vice chairmen of the Central Military Commission (CMC) appointed by Jiang who continued to wield great political influence even after Jiang’s successor Hu Jintao took power. Guo was sentenced to life imprisonment last year, while Xu died in 2015 while under investigation.

Guo and Xu followed Jiang’s orders during the 2008 Sichuan earthquake, when it was widely reported that military rescue workers refused to take orders to head to the disaster zone immediately, as all military movement needed the approval of Jiang, who stayed on as the CMC’s chairman, even though he had already stepped down from the Party’s top leadership position.

Later in 2011, a surprise test flight of the military’s stealth fighter jet stunned Hu while he was having a meeting with then U.S. defense secretary Robert Gates. Sources told the South China Morning Post that Xi was inspired to shake up the military after seeing how Hu was so isolated by Jiang’s proxies, Guo and Xu.

In Xi’s opening speech at the 19th National Congress on Oct. 18, he alluded to more purges in the military as he continues his second five-year term.

The Epoch Times had earlier reported rumors that Xi plans to increase the number of the CPC’s vice chairmen to possibly three or four, so the power can be spread among multiple officials.

In addition to Guo and Xu, some well-known high-ranking military officials who have been purged include Tian Xiusi, the former political chief of the CCP’s airforce; Wang Jianping, the former deputy chief of the general staff in the CMC; and Wang Xibin, the former president of PLA (People’s Liberation Army) National Defense University. Both Tian and Wang had connections to Jiang’s faction—Tian was a “subordinate accomplice” to Zhou Yongkang, the disgraced former security chief who was loyal to Jiang, while Wang had bribed Guo and Xu to secure his military position.

Liu Yuan, retired general and current deputy director of the National People’s Congress Financial and Economic Affairs Committee, also confirmed that reform of the military had started, hinting at a future military purge, in an interview with Radio Television Hong Kong on Oct. 18.

Liu, however, did not comment when asked if the number of CMC vice chairmen would be increased.

Liu has long been considered by many sources to be loyal to Xi and someone who was taking the lead in the anti-corruption campaign in the military.