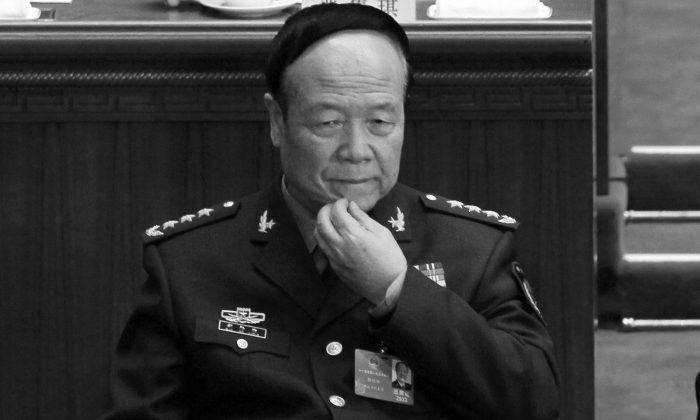 Guo Boxiong, once the highest-ranked military official in China, was sentenced to life in prison on July 25 on charges of corruption.

It’s certain, however, that the punishment was more for political reasons. Guo, together with his colleague Xu Caihou, acted for years to ensure that the former communist leader Jiang Zemin would retain an extraordinary level of influence in China after his formal retirement in 2002.

For many years Guo and Xu were the two vice chairmen of the Central Military Commission (CMC), the Party agency that controls the armed forces. They were appointed by Jiang Zemin. After Jiang’s retirement, Hu Jintao, the next Party leader, was chairman of the Commission — but he had little control, according to revelations over the last year or more.

It is against this background that a Chinese military court found General Guo, 74, guilty of taking bribes to grant promotions and delegate duties, and abusing his position to benefit his family and himself, according to state mouthpiece Xinhua New Agency.

Such prosecutions are careful to stay away from politics — though statements by the Party leader Xi Jinping recently have made clearer than ever that he believes a conspiracy to “wreck” the Party was afoot, almost certainly a reference to a political coup or similar against the leadership. Guo Boxiong was an important part of this network of officials, though he has not been named by Xi Jinping.

Guo confessed to his crimes, Xinhua reported. He was stripped of his rank, and made to surrender his wealth and assets. Although mainland Chinese media didn’t report the extent of Guo’s wealth, the English language Hong Kong daily South China Morning Post reported that he had in total accepted 80 million yuan ($12.3 million) in bribes, though this is likely a vast understatement.

Guo was formally investigated by the Chinese military’s internal disciplinary agency in April 2015. On July 30, the Politburo—a top Party decision making body—decided to expel Guo from the Party, and declared in a statement that “his acts seriously violated Party discipline and left a vile impact.”

From 2002 to 2012, Guo Boxiong served as vice chair of the Party’s People’s Liberation Army. Aside from overseeing the military’s daily operations, Guo and the other CMC vice chair, Xu Caihou, also controlled large annual budgets and lucrative military contracts.

In March 2014 while in hospital with bladder cancer, Xu was investigated for corruption; charges were dropped after he died a year later.

Guo and Xu are considered loyalists of former Party leader Jiang Zemin because they both owed their promotions to him; Jiang stayed on as chairman of the CMC until 2005, even though he had stepped down as head of the Party in 2002.

The purge of Guo and Xu are widely believed to be part of current Party leader Xi Jinping’s move against Jiang and the political network he oversees as part of a power consolidation process.

In the first half of 2016, anti-corruption investigators swept Shanghai, Jiang’s long time home base. The investigators are presently probing an extralegal Party agency created by Jiang to carry out the political persecution of Falun Gong, a traditional Chinese meditation practice.

Earlier in the year Jiang Zemin and his elder son Jiang Mianheng were placed under some form of soft detention, according to a number of sources who spoke to Epoch Times.

A July 21 report by pro-Beijing Hong Kong newspaper Oriental Daily made much of the fact that Jiang Zemin failed to send a wreath to the wake of a recently deceased Party elder. In China, that means trouble for Jiang.