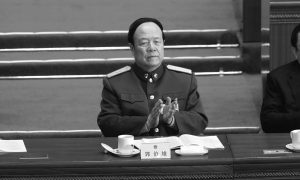 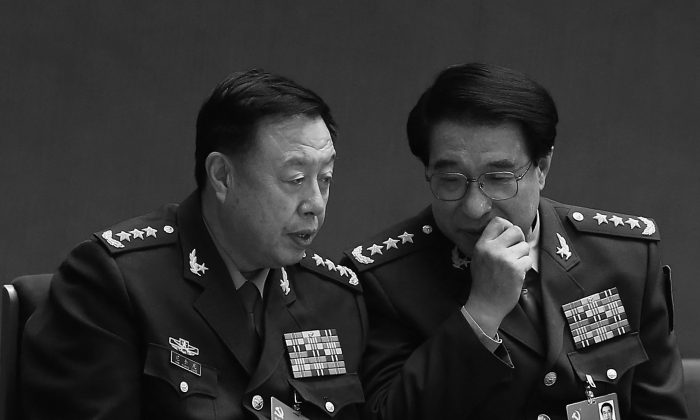 Chinese vice chairmen of the Central Military Commission Xu Caihou (R) and Fan Changlong talk during the closing session of the 18th National Congress of the Communist Party of China at the Great Hall of the People on Nov. 14, 2012 in Beijing, China. Xu, under investigation for bribery, died from cancer on March 16, according to state news media. (Lintao Zhang/Getty Images)
China

Xu Caihou, formerly the second most powerful man in the Chinese military, and widely understood to be disloyal to Communist Party leader Xi Jinping, is dead, according to state media.

Xu’s death, from bladder cancer, does not come as a great surprise. In March last year, when he was formally placed under investigation for bribery, was said to be in hospital suffering from the disease. On March 16 Xinhua News Agency, the state mouthpiece, reported that his cancer had metastasized and shut down all organ function, leading to his death the night before.

The public political destruction of General Xu was one of the most remarkable events in the Chinese Communist Party over the last several years, even during a period where high-profile purges and takedowns had become almost daily occurences. Along with Xu there was the purge of former security boss Zhou Yongkang, another giant in the Party that had once been considered untouchable.

Xu had been placed under investigation on charges of bribery in March of 2014; two months later he was expelled from the Communist Party.

In announcing the news, Xinhua also said that the military would not be moving ahead with the case to prosecute Xu for corruption and a range of other charges.

Xu had been placed under investigation on charges of bribery in March of 2014; two months later he was expelled from the Communist Party.

He appeared back in the news recently on a matter apparently unconnected to the official campaign against him, when the SARS whistleblower Jiang Yanyong accused Xu of protecting the military’s participation in the harvesting of organs of prisoners—sometimes while the victims were still alive. It is highly unusual for an individual such as Jiang, who enjoys a high profile due to his extensive career as a surgeon in the military and for his role in exposing SARS to the West, to be allowed to make such accusations against a former member of the Chinese military.

Xu was from 2004 to early 2013 the vice chairman of the Central Military Commission, the Communist Party agency that controls the military; prior to that he had a lengthy career in the military, including as political commissar at a range of levels, and finally the head of the Party’s own anti-corruption agency. His elevation to vice chairman of the CMC is understood among analysts to be due to his fealty to former regime leader Jiang Zemin, on whose behalf he kept strong control over the military even during the reign of Jiang’s successor, Hu Jintao. Xu had also developed a network of clients in the forces—among them the prickly Guo Boxiong, a retired general and another former vice chairman of the CMC—another reason that purging him became a necessity.

Rumors about Guo Boxiong’s political demise have circulated for a long time. Earlier this month Reuters, echoing these reports, said that sources had confirmed that Guo was under investigation.

For Xu Caihou’s part, many of the details of his alleged crimes in office come from a detailed report carried by the pro-Beijing, Hong Kong-based Phoenix Weekly. Phoenix is often a bellwether for the political direction in Beijing, since the magazine relies on Party sources authorized to speak to it, and typically cannot depart too far from the Party line.

In a feature article headlined “Xu Caihou: Traitor,” the magazine discussed Xu’s corruption, his political allegiances, and why he was a threat to Jiang Zemin.

Xu had, first of all, effectively blocked Hu Jintao, the leader immediately preceding Xi Jinping, from genuinely taking control of the military. Along with his co-vice chair Guo Boxiong, the two ran circles around Party leader (and only chairman) of the CMC, Hu Jintao, until Hu left office in 2012 and 2013.

When it came to Xi Jinping’s expected tenure, Xu was reportedly just as uninterested following orders, or giving his loyalty to anyone other than Jiang Zemin. On a semi-public occasion, with other military officers present, Xu once boasted: “Let him try it for five years, then he can get the hell out!” These words spread through gossip circles in military families before reaching Xi Jinping’s ears, the report says.

Let him try it for five years, then he can get the hell out!
— Gen. Xu Caihou, speaking of Party leader Xi Jinping

Xu, as a “favorite” of Jiang Zemin in the military, was promoted to the vice chairmanship in 2004, the year that Jiang left his last Party military post. He served in the role until March 2013.

According to Yang Chuncheng, a former deputy director at the Academy of Military Science, told Phoenix that Xu effectively “emptied the power of the CMC leader at the time.”

Xu is the highest level military official to be sacked in Xi Jinping’s purge so far. His record of corruption, according to Party investigators, matches the scale of his power: Xu had a warehouse filled with treasures, including precious jades that weighed hundreds of pounds, rare hardwoods, gold, about 10 rough diamonds, piles of cash, antiques, and a collection of antique paintings.

Reportedly 10 military trucks were used to haul all the goods away. When the discovery was brought to Xu’s attention, he reportedly admitted to it all.

Some of Xu’s money came from embezzling state assets, though much of it was also made through the rampant sale of military positions. As political commissar, and later able to control personnel management and deployments, Xu wielded vast influence over promotions and appointments, and climbing to high ranks often required bribes making their way to Xu Caihou.