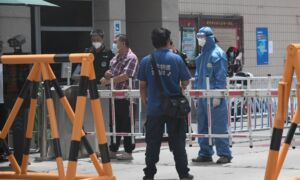 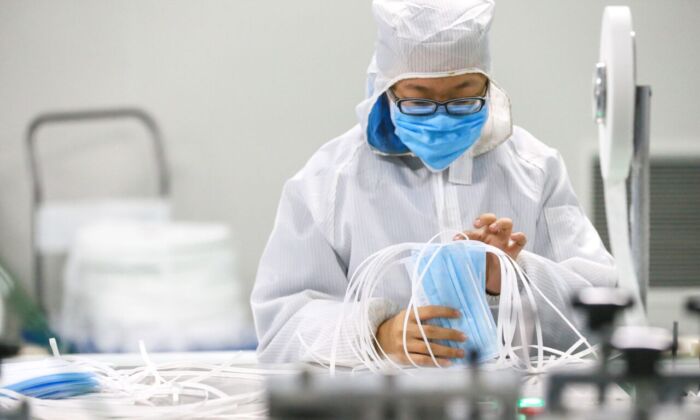 A worker produces protective face masks at a factory in Qingdao, China on Feb. 6, 2020. (STR/AFP via Getty Images)
INSIDE CHINA

Authorities in the city of Qingdao in eastern China announced three new CCP virus infections on Oct. 11, all related to a local hospital, although officials haven’t been able to trace the source of the outbreak.

On Oct. 11, authorities said the new cases—a patient being treated at the hospital, a woman who was a medical aide there, and the aide’s husband—were all related to the Qingdao Chest Hospital and shut the facility.

Officials there have since been on alert, organizing mass COVID-19 testing, since the seaside city, which is a major tourist destination, reported two asymptomatic carriers on Sept. 24. But for the most recent National Day holiday from Oct. 1 to Oct. 8, authorities claimed the city was safe for visiting.

The Chinese regime is also known to underreport cases in order to downplay any crisis; thus, it’s difficult to assess the true scale of the most recent outbreak.

Soon after the report out of Qingdao, the northeastern city of Dalian issued a notice on its official social media accounts: “All residents should not go to Qingdao unless for necessary trips.”

The Dalian government also asked any residents who had recently visited Qingdao, especially the Qingdao Chest Hospital, or anyone who had contact with a person who came from Qingdao after Sept. 27, to report to authorities and perform strict quarantine procedures.

Furthermore, residents who wish to travel to Qingdao in the near future, were told they must follow strict quarantine rules upon returning to Dalian.

The Dalian authorities told residents to visit the hospital if they have fever, coughing, diarrhea, fatigue, and other possible COVID-19 symptoms.

“[Suspected patients] should not take public transportation to go to a hospital,” it said.

Dozens of other Chinese cities have since issued similar messages to their residents, such as Heze city in Shandong Province, Dandong in Liaoning Province, Baicheng in Jilin Province, and Ganzhou in Jiangxi Province.

When authorities first confirmed cases in September, they claimed that the outbreak came from imported frozen seafood, although food products are not known to spread the virus.

In the most recent spike of cases, state-run newspaper Health Times quoted doctors from the Qingdao hospital, who said the facility was closed and wouldn’t take any new patients.

Health Times reported that the hospital was treating COVID-19 patients, but didn’t disclose how many.

U.S.-based China affairs commentator Tang Jingyuan says that the strict quarantine rules and requirements for all residents to undergo testing contradicts the reported severity of the outbreak.

“From the Shandong and Qingdao government’s reaction, we can surmise that the CCP virus outbreak in Qingdao concerns the authorities,” he said in a phone interview.

Top leaders in the Chinese regime are also hinting about the political importance of containing outbreaks.

“After Chinese leader Xi Jinping announced the country won the epidemic [on Sept. 8 during a speech], no officials in China dare to report the real scale of the outbreak,” Tang added.