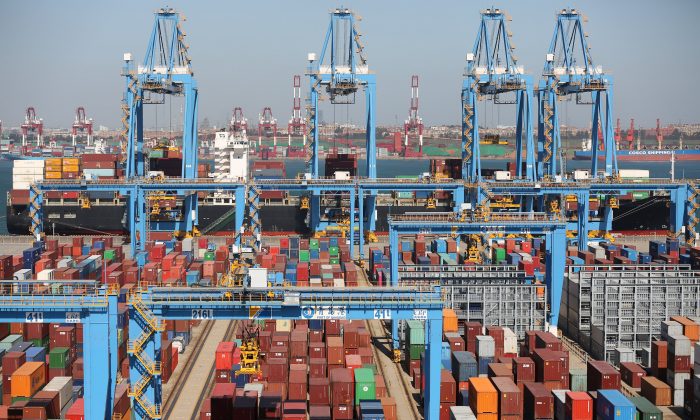 BEIJING—China’s export growth is expected to have further slowed in September, weighed down by a faster decline in orders as an intensifying trade war with the United States starts to hurt Chinese shipments, a Reuters poll showed.

Import growth also likely came off recent highs, which would be a worrying sign for Chinese policymakers counting on domestic demand to shore up economic growth at a time of slower external demand.

China’s September export growth likely slowed to 8.9 percent from a year earlier from August’s 9.8 percent gain, according to the median estimate of 32 economists in the Reuters poll.

Import growth is also expected to have slowed, to 15 percent versus a 19.9 percent gain in August.

“We expect export growth to slow further in September as rising trade protectionism bites. This September has one less working day than last year, which should also add downside pressure on exports,” economists at Nomura, an Asian-based financial services group, said in a recent note.

“In the medium-to-long term, if China-U.S. trade tensions sustain, China’s growth would likely be hit beyond the scale indicated by these trade data.”

China’s overall trade surplus is expected to have shrunk to $19.4 billion in September from $27.89 billion in the previous month.

Growth in China’s factory sector in September stalled after 15 months of expansion, with export orders falling the most in more than two years, a private business survey showed. An official survey also confirmed a further manufacturing weakening.

In Guangdong, China’s biggest province by gross domestic product and one of the most export-oriented provinces, manufacturing activity barely expanded in September after contracting the previous month, the provincial government said.

The State Council, or cabinet, has pledged to raise tax rebates for exporters for the second time this year, and Chinese officials have promised additional steps to help struggling domestic firms.

While official export data has proved surprisingly resilient this year, many analysts believe companies have rushed out shipments to the United States to beat successive rounds of tariffs, raising the risk of a sharp drop-off after duties are actually imposed.

The world’s two biggest economies last slapped tit-for-tat tariffs on each other’s goods on Sept. 24. There is no specific date set for the next round of tariffs, even as U.S. President Donald Trump has made repeated threats to impose them on virtually all Chinese goods.

On Oct. 9, the International Monetary Fund cut its global economic growth forecasts for this year and next, saying the U.S-China trade war was taking a toll. It also reduced China’s growth forecast for next year to 6.2 percent from 6.4 percent.

To help shore up the economy, China on Oct. 7 announced its fourth cut this year in the amount of cash banks have to set aside as reserves, reinforcing expectations of more policy easing ahead to counter the blow from the trade war with the United States.