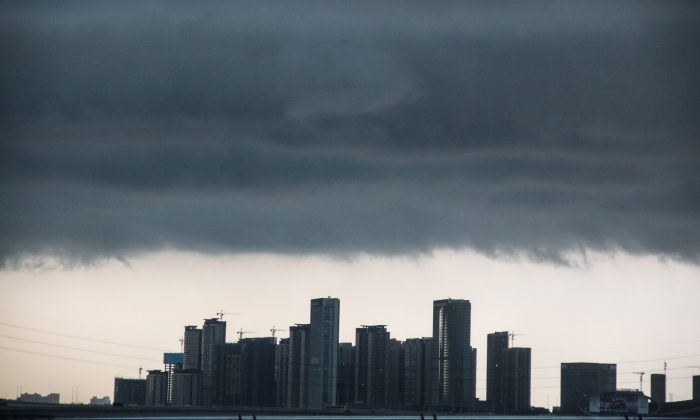 The Guangzhou City skyline in Guangdong Province on May 22, 2014. (VCG/VCG via Getty Images)
China Business & Economy

China’s coastal provinces and cities, prime drivers of the country’s economic growth, are straining to cope with the tandem pressures of an overbearing state sector and escalating tariffs imposed by the Trump administration.

The private sector along China’s affluent coast has long been squeezed for profits and markets by the wide reach of China’s inefficient and corruption-riddled state-owned enterprises (SOEs). Tax changes set to go into effect in 2019 will saddle firms and workers with an additional $300 billion in taxes each year.

The affluent provinces of Guangdong, Jiangsu, and Zhejiang, as well as the directly administered city of Shanghai, not only play an important role in China’s economy but are also the source of its $500 billion trade surplus with the United States that Washington is targeting with current and proposed tariffs.

On Sept. 24, the United States introduced a tariff on a further $200 billion worth of Chinese exports that starts at 10 percent and may be increased to 25 percent next year. The Chinese regime responded immediately, placing tariffs on $60 billion of U.S. goods.

In 2017, exports from the three affluent provinces accounted for almost half of the national total, and imported 56 percent of all goods from abroad. China’s trade surplus comes almost entirely from these three provinces and Shanghai.

As a result of the Sino-U.S. trade conflict, however, China’s trade surplus has dipped by almost one third since last year.

Guangdong Province is China’s biggest exporter. According to China customs data, in the first eight months of 2018, its exports dropped and imports rose, cutting trade surpluses by one quarter since last year. Trade data from Jiangsu and Zhejiang show similar trends.

In China, key industries are overwhelmingly dominated by state-owned enterprises (SOEs), which gives the Chinese Communist Party (CCP) more control over the economy, at the cost of innovation and profitability.

Since the CCP’s implementation of wide-reaching economic interventionary measures, privately run companies have been struggling to meet government regulations, affecting the three coastal provinces that host much of China’s private economic activity.

Guangdong Province, the go-to success story during China’s economic reform era that began in the 1980s, now reports serious deficits in the manufacturing sector as the state takes greater control over industry.

According to official statistics in Jiangsu Province, 2,461 enterprises dropped off the list of “designated enterprises”—companies with revenue that tops 20 million yuan (about $3 million)—representing 5 percent of the total number of such companies. Private investment, as well as industrial revenue, has dropped.

In the first six months of this year, investments in the Jiangsu private sector fell to 765.6 billion yuan ($111.30 billion) from the 976.5 billion yuan in the same period last year.

The Chinese private sector that grew vibrantly in the past several decades is now on the verge of collapse, a victim of being squeezed for profits by the CCP, and as the Party doubles down on its positions in the Sino-U.S. trade war. New U.S. tariffs will target China’s high-end manufacturing and consumer exports, and expand to cover all goods imported from China.

In recent years, as part of supply-side reforms and deleveraging, the Chinese regime has shifted massive debts from SOEs to the private sector. Meanwhile, the Party has imposed a $300 billion taxation and social security plan aimed to generate funds for deficit-ridden local governments, also at the cost of the private sector and the general population.

Recently, the regime rolled out new policies to allow the crash of small-scale financing platforms, as reflected by the P2P lending bust, and strengthened state-owned liabilities. Authorities have directed local governments and the SOEs to cover their debts chiefly by appropriating private capital.