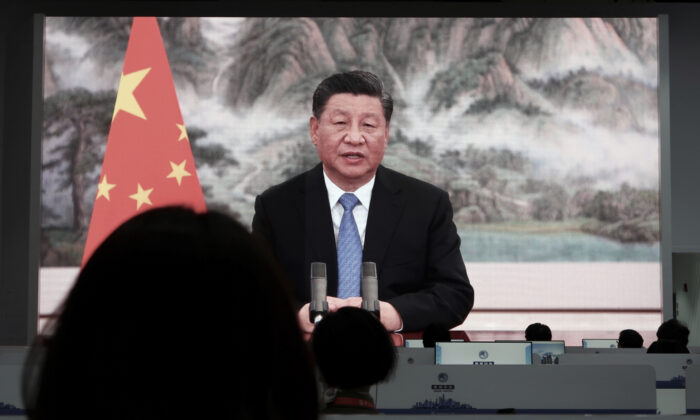 Chinese President Xi Jinping is seen on television screens at a media centre as he delivers a speech via video at the opening ceremony of the China International Import Expo (CIIE) in Shanghai, China, on Nov. 4, 2021. (Andrew Galbraith/Reuters)
China Business & Economy

Chinese leader Xi Jinping on Oct. 4 said the regime was open to talks about state subsidies to domestic industrial firms—a practice that has become a sticking point in U.S.-China trade relations.

In virtual remarks at the opening of the China International Import Expo in Shanghai, Xi said China will keep an “active and open attitude“ to negotiations over topics such as digital economy, trade and environment, industrial subsidies, and state-owned companies.

China will support multilateral trade system centered around the World Trade Organization (WTO), he said, adding that the system has come under “a number of challenges.”

“Openness is a distinct characteristic of contemporary China,” Xi said in the speech on Thursday evening.

Senior U.S. officials have repeatedly described Beijing’s massive state subsidies as an unfair economic practice that gives Chinese companies a significant advantage over other firms on the international market.

U.S. charge d’affaires David Bisbee in October told the WTO, which just began its first review of China’s trade policies since 2018, that China’s industrial subsidies “skew the playing field” against imported goods and services. The United States would use all tools at hand to secure Beijing’s reforms, Bisbee said.

Over the years, China has poured billions in subsidies to critical sectors such as steel, solar energy, and agriculture, U.S. Trade Representative Katherine Tai said in an Oct. 4 speech. These Chinese products have been dumped on the global market at a price that American companies struggle to compete with, shuttering many U.S. factories in the process.

China, the world’s top steel producer, is “the biggest driver” of the global overcapacity for steel, Tai told steel industry executives later in the month. China produces over 1 billion metric tons each year, accounting for nearly 60 percent of the world’s steel production.

Wang Shouwen, vice minister of China’s Ministry of Commerce, has recently called for the removal of “enormous” farm subsidies in some developed countries as part of Beijing’s push for WTO reform, even as Beijing faces long-standing complaints from other WTO members about its own agricultural support policies.

Treasury Secretary Janet Yellen on Oct. 1 said that the United States is waiting on China to meet its $200 billion purchasing commitments under the phase-one trade agreement, but considers a reciprocal lowering of tariffs as a “desirable outcome” to help ease domestic inflation, which is now running at a 30-year high.

“Our trade representative has said that we would consider additional tariffs reductions,” she said in the Reuters interview. “We want to see China meet their commitments they made under phase one, but stabilizing and perhaps eventually lowering some tariffs in a reciprocal way could be a desirable outcome.”

Beijing has positioned itself as a “staunch supporter” of multilateralism even though analysts said the regime has been influencing and subverting international bodies, and promoting a value system of its own. It has also previously described international expos as a platform to project the image of an open China.