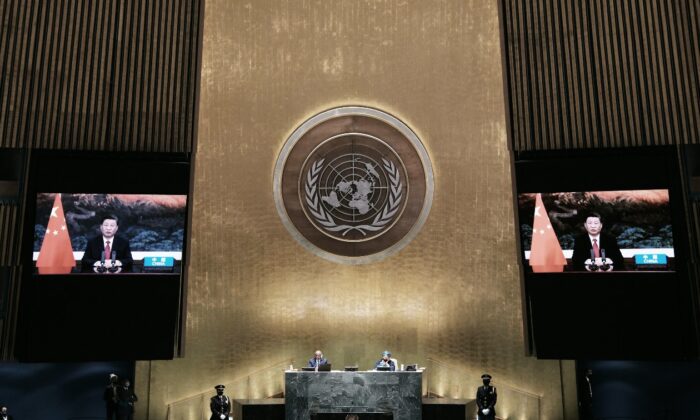 Revelations that World Bank leaders pressured staff to rig an influential report in China’s favor have once again shed light on the Beijing regime’s influence within the United Nations system.

A recent investigation found that then-World Bank President Jim Yong Kim and then-Chief Executive Kristalina Georgieva had applied “undue pressure” on staff to boost China’s ranking in its 2018 “Doing Business” report. At the time, the World Bank leadership was “consumed with sensitive negotiations” over a major capital increase, a move that increased China’s stake in the lender, investigators said. Leaders had also received repeated overtures from senior Chinese officials wanting the country’s score to be raised to reflect its initiatives at reform.

The fallout from the probe has been swift. The World Bank announced its abandonment of the Doing Business report entirely. Georgieva, now head of the International Monetary Fund (IMF), has faced calls for her resignation, including by The Economist magazine. The embattled chief, however, has vehemently denied the investigation’s findings.

China’s communist regime sees the existing international order as a threat to its interests, Seth Cropsey, a senior fellow at the Washington-based think tank Hudson Institute, told The Epoch Times. “So they want to break it up whenever possible.”

“Influence and membership and participation in international organizations give them the foot in the door that they need to accomplish that goal.”

And to achieve its ends, Cropsey said, Beijing is “willing to use bribery, threats of force, political pressure” and any other means.

The World Bank played an important role in shaping the Chinese Communist Party’s (CCP) economic reforms in the 1980s and 1990s, when the regime was attempting to extricate the country away from backwater status, according to China expert Michael Pillsbury.

In his book “The Hundred-Year Marathon,” Pillsbury wrote that the World Bank secretly advised the CCP as early as 1983. That year, World Bank executives met with CCP leader Deng Xiaoping. As a result, the bank agreed to study China and recommend how the regime could catch up to the United States economically in the following decades.

While the lender released “a few vague reports” about China’s need to develop free markets, in private, the World Bank by the mid-1980s endorsed the regime’s socialist approach and “made no genuine effort to advocate for a true market economy,” Pillsbury wrote.

“China will not stop its so-far successful campaign to gain decisive influence in all the U.N. specialized agencies and to continue their successes in obtaining benefits from the IMF and World Bank,” Pillsbury told The Epoch Times in an email.

The IMF and World Bank are among 15 U.N. specialized agencies, of which Chinese representatives head three. No other country leads more than one body. Meanwhile, the International Civil Aviation Organization just saw its Chinese chief depart in August after a seven-year term.

“Since I wrote The Hundred-Year Marathon six years ago, the Chinese have not suffered any significant sanctions that would cause them to change their successful trajectory to surpass the U.S. in global primacy,” Pillsbury wrote.

The CCP’s only recent setback in the U.N. system, according to Pillsbury, occurred when the Chinese candidate was outvoted for the top post at the World Intellectual Property Organization (WIPO).

In the lead up to WIPO’s March 2020 election, the Trump administration mounted an effort to ensure that Wang Binyang, a representative of the Chinese regime—which is notorious for its lack of intellectual property protections—wasn’t successful in his bid to lead the body charged with safeguarding those rights worldwide.

Wang was ultimately defeated by Singaporean Daren Tang, who was backed by the United States and many other Western nations, by a vote of 28 to 55.

“The Chinese thought they had a fast-track to that [position],” then-U.S. Secretary of State Mike Pompeo said in July 2020. “We put up a good candidate. … And we crushed them. It was an amazing diplomatic effort.”

Pushing Belt and Road Through UN

The Chinese regime also has used U.N. bodies to legitimize and promote its massive global infrastructure investment project, known as the Belt and Road Initiative (BRI). The trillion-dollar plan has been criticized by U.S. officials for facilitating the expansion of Beijing’s economic and military clout, while saddling developing countries with unsustainable debt burdens.

The U.N. Department of Economic and Social Affairs, a secretariat body, has been a major vehicle used by the regime to promote BRI, according to a 2019 report by Washington-based think tank Center for a New American Security. Chinese officials have held the top position at the U.N. body since 2007, allowing Beijing to draw on “an extensive network of Chinese nationals to steer the organization toward embracing” the BRI, the report stated.

Through these efforts, the Chinese regime has been able to package its BRI projects under the U.N.’s sustainable development goals, the report said, thus allowing U.N. resources to be directed toward Chinese-backed investments.

The WHO, led by Hong Kong’s Margaret Chan from 2007 to 2017, also promoted the BRI in the health care sector.

In January 2017, Chan signed a BRI memorandum in health care with China at a meeting with CCP leader Xi Jinping in Geneva. In May 2017, less than two months before the end of her term, Chan visited Beijing and signed the action plan. Upon leaving the WHO, Chan immediately took high-level positions in CCP organizations, including the Political Consultative Congress, a political advisory body that is a key organ in the regime’s domestic and foreign influence efforts, known as “united front” work.

Current WHO chief Tedros Adhanom Ghebreyesus, who succeeded Chan in July 2017, led a WHO delegation to the Belt and Road Forum for Health Cooperation in Beijing in August 2017. During that trip to China, Tedros signed a strategic agreement supporting the BRI, while the WHO received an additional contribution of $20 million from the regime.

This memorandum between the WHO and China, which hasn’t been made public, will allow China’s ruling regime to expand its influence over hospital systems worldwide, particularly in the area of data, Ian Easton, senior director at Virginia-based think tank Project 2049 Institute, warned during an August virtual discussion hosted by the Hudson Institute.

The agreement paves the way “for client states around the world to use Chinese technology, products, and software in hospitals and other organizations relating to global health,” Easton said.