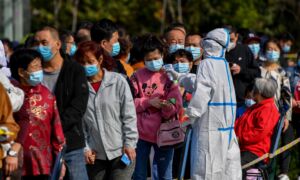 Has Chinese leader Xi Jinping’s emperor dream been revealed? China finished its key political meeting of the year, and one of the meeting highlights is sending shockwaves.

During the meeting, two suns appeared in the sky in a city close to Beijing. The Chinese say it’s a sign of something big to come.

80 percent of China’s medical care funding goes to CCP upper-level officials, and this is only the tip of the iceberg.

And the United States is removing the CCP’s entities of influence in the country, one by one.