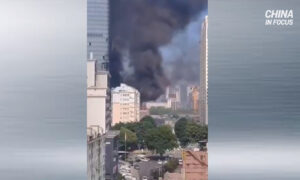 China in Focus (Aug. 27): China’s Vaccine Diplomacy Is on the Way

Xinjiang’s capital has already been in lockdown for 40 days. A local resident tells us the extent of the virus protection measures. Now, opening the front door is considered a crime.

A new report says China plans to launch an ambitious policy for vaccine diplomacy. It’s already announced collaborating with Pakistan and plans to vaccinate nearly half the world’s population.

Watch part two of our interview with a Chinese whistleblower. In the early stage of the outbreak, he helped the local Chinese government snap up the world’s masks. Now, he’s accusing the regime of intentionally creating a global supply shortage.

And Elon Musk’s SpaceX contract with NASA may be in jeopardy, as U.S. lawmakers question whether Tesla’s ties to China could jeopardize national security.