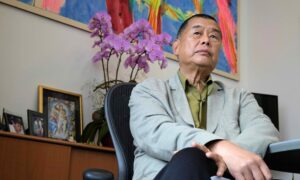 Up to 5,700 farmers have been forced to have their homes demolished. Their farmland, also destroyed. Under threat, farmers fight for their rights.

The United States designated the Confucius Institute Center a foreign mission of the Chinese regime. The state-funded language centers have been accused of exporting Chinese censorship to U.S. campuses.

It’s not a good time for Chinese listings. The SEC is investigating the Chinese Netflix, iQIYI, over fraud allegations, and a Chinese jewelry group is voluntarily delisting itself from the Nasdaq, after a scandal broke out that it’s involved in one of China’s largest loan frauds. And U.S. banks earned over $400 million fees from Chinese listings this year.

And in the confrontation between the free world and communist China, Taiwan, a small democratic island, plays a critical role. It is taking a tougher stance toward the Chinese Communist Party for several reasons.