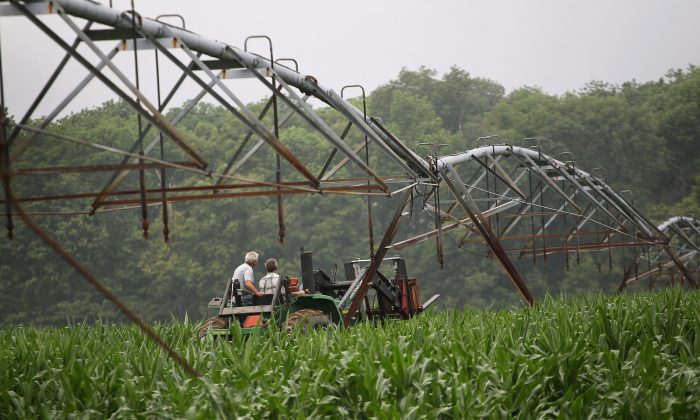 Indiana farmers ride a tractor through their cornfield. According to U.S. Department of Agriculture (USDA) Secretary Tom Vilsack, lawmakers’ failure to compromise on the Farm Bill have left farmers in the lurch. (Scott Olson/Getty Images)
US

“Kicking the can down the road is a bad idea. We need a five-year bill so farmers have some certainty,” Vilsack said at a rally in Des Moines, Iowa.

The once-in-five-years legislative package is now two years overdue, but a deep partisan divide has made any compromise impossible.

While the nation currently has no farm bill, consumers won’t feel much of a pinch until after Jan. 1, when a 1949 farm law kicks in. The impending date, dubbed the “dairy cliff,” triggers an antiquated statute that would cause milk prices to spike.

Some farmers are already experiencing the consequences of legislative limbo. When an early blizzard—winter storm Atlas—hit the northern plains states this month, ranchers reported livestock losses as high as 50 percent for some herds, and many grain crops in the area were destroyed.

According to an Oct. 11 statement from the U.S. Cattlemen’s Association, an expired farm policy and government shutdown left farmers “without federal resources in the face of this catastrophe.”

One strategy proposed for overcoming farm bill gridlock suggests attaching the measure onto an even larger, absolutely must-pass legislation package—such as the anticipated debt ceiling bill, for example.

Andrew Novakovich, agricultural economist, farm bill expert, and professor of Applied Economics and Management at Cornell University, said that while it’s a tempting scenario, “It still begs the question: What is this thing that will be attached to this must-pass legislation?”

“Clearly there isn’t a whole lot of evidence in the leadership of the Congress and the president coming together even close around some concept,” he said.

The most glaring case in point is food stamps. Proposals in the House and Senate both cut billions of dollars from SNAP (the Supplemental Nutritional Assistance Program), but the House proposal cuts 10 times more—$39 billion over 10 years. However, House Republicans’ insistence on deeper SNAP cuts has not been able to produce a bill that other lawmakers are willing to pass.

Farm bill disputes are nothing new, but never has the failure to compromise been so severe. One option proposed by the Heritage Foundation and promoted by some Republican lawmakers is simply to extend the 2008 farm bill for another year—averting a crisis and allowing lawmakers more time to work out a deal.

The USDA and Obama administration oppose a second extension, but given the current environment in Washington, some analysts believe it may be the only way to address the problem.

“I’m positive that there’s not a single member of Congress who thinks that an extension is the best idea, but at the end of the day it’s not about the best idea, it’s about what you can actually pass. And I think pragmatically that may be the best that Congress is able to do,” said Novakovich.

It’s unclear what it will take for lawmakers to find common ground, but according to Novokovich, too much of the fight has been about numbers, and not enough about crafting good laws.

“We end up in something like in the case of food stamps talking about my plan versus your plan in terms of dollars saved, which of course is just an estimate. We don’t talk about what kind of people should get food stamps, what should be the conditions under which you should keep food stamps, what kind of level of support should you expect?” he said.

“Our discussions of these issues are often very superficial.”

On Oct. 12, the House named the latest group of farm bill conferees. Negotiations with the Senate are expected soon.