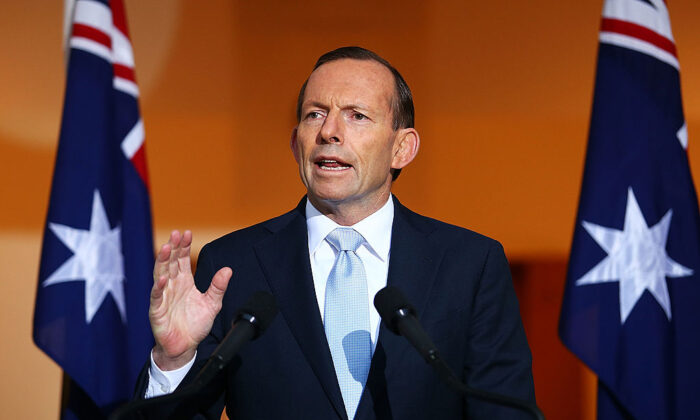 Centre-Right Australians Too Polite, Time for Silent Majority to Speak Up: Former PM

Former Australian Prime Minister Tony Abbott said it was time for the quiet Australians to “find their voice” and push back on the teaching of critical race theory and similar ideology in schools, just like the Virginians did in their election.

Abbott made the comments while speaking with the Institute of Public Affairs on a podcast about how Australians should learn from how Gov-elect Glenn Youngkin found huge support in the election by showing he was prepared to fight culture wars in Virginian classrooms.

The draft of the national curriculum that was released in April attracted heavy criticism for removing references to Christianity and the history of the Western world and democracy.

It also introduced teaching young children to recognise “institutional racism,” such as having Year 2 students assess whether statues could be considered racist.

“The problem is: are our kids getting an education or an indoctrination in the classroom?” Abbott said.

“A majority that stays silent does not long remain a majority,” he said. “It’s way past time for the quiet Australians to find their voice on this important topic—an absolutely vital topic for our country’s future.”

Abbott said the country’s centre-right movement was so polite and therefore ends up deferring to intellectual and ideological opponents “far too routinely and far too frequently.”

“I’ve got to say I scratch my head often enough and think, why is it that more of us don’t put our feet down and say enough is enough? Why don’t we say, look, this is wrong. It shouldn’t be happening,” Abbott said.

Abbott said the Virginian parents’ movement against CRT would have “gone nowhere” if not for someone like Youngkin, who was prepared to be the political standard-bearer for it.

“You’ve got to have a political standard-bearer,” he said. “And that’s what we need now.”

Like every other country, Abbott said that Australia’s history has chapters that “don’t reflect well on us,” but overall, it was a great country that Australians should be proud of.

“Yet educational institutions don’t seem to want to celebrate their country in the appropriate way, and I just think it’s way past time for this to change,” he said.

Education Minister Alan Tudge has previously warned that students who don’t learn the history of Australian values won’t defend Australia as the older generations have.

“There has not been a more important time since the 1940s to teach children the origins, values, and singular greatness of liberal democracy,” he said.