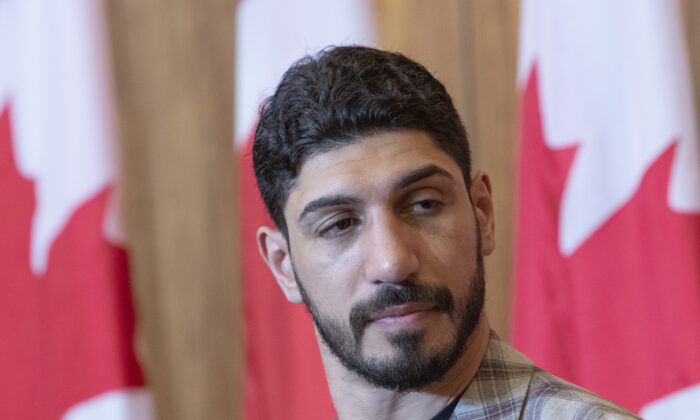 Enes Kanter Freedom, an NBA free agent and human rights defender, takes part in news conference in Ottawa, on June 6, 2022, calling on the Canadian government to ban imports of goods made with forced labour in Xinjiang region of China. (The Canadian Press/Fred Chartrand)
Canada

The Canadian Senate has welcomed a visit from former NBA player and human rights defender Enes Kanter Freedom, who continued to call attention to human rights abuses waged by authoritarian regimes like China.

“Huge thanks to Canadian Parliament and Senate for the warmest welcome by so many people committed to making a difference and standing with me for Freedom,” the NBA free agent said in a tweet posted on June 8.

“Let’s work together to promote Human Rights and Freedom all over the world.”

Huge thanks to Canadian Parliament and Senate for the warmest welcome by so many people committed to making a difference and standing with me for Freedom.

Let’s work together to promote Human Rights and Freedom all over the world.

“It was [Freedom’s] outspoken criticism of the Chinese communist regime, and the Western companies who continue to aid and enable China’s genocidal practices, that caught the attention of millions of people around the world,” Housakos said.

“Mr. Freedom has been a leading voice for the rights of Uyghurs in particular, and also for those of Tibetans, Hong Kongers, and others.”

He said Freedom’s visit to the Senate serves as a reminder to Canadian parliamentarians of their responsibility to “do more” to defend human rights and uphold the values of democratic societies.

“As parliamentarians, we have the tools needed to stand up to maligned regimes, the likes of CCP, and we must do more to exercise our role and responsibility as defenders of democracy, freedom, and human rights,” Housakos said.

Freedom and Housakos, along with Tory MP Garnett Genuis, held a press conference on June 6, to call on the Liberal government to ban imports of goods allegedly made with forced labour in China’s northwestern province of Xinjiang, where an estimated 2 million Uyghurs and Turkic Muslims are reportedly held in concentration camps.

Apart from being used for forced labour, those held at the camps also serve as a potential source for the regime’s gruesome practice of forced organ harvesting, according to Canadian human rights lawyer David Matas.

“Because of the massive concentration camp system for Uyghurs now, there’s a lot of Uyghurs being shipped out alive from Xinjiang, normally as for labour, but potentially as forced organ transplant sources,” he said in a previous interview with The Epoch Times.

In early 2021, then Foreign Affairs Minister François-Philippe Champagne announced a series of measures to address human rights abuses in Xinjiang, including the prohibition of imports from China wholly or partially made with forced labour.

Freedom, who has been nominated for the 2022 Nobel Peace Prize, said at the June 6 press conference that he felt ashamed for only focusing on Turkey’s human rights issues in the past few years, after recently learning about China’s gross rights violations.

After speaking with a survivor of China’s concentration camps, he said he wanted to educate his NBA teammates about what’s happening there, but when the topic of China was raised, Freedom said many of his colleagues “were scared to say a word about it.”

Freedom says his outspokenness against the CCP led to his release by the Houston Rockets, soon after he was traded from the Boston Celtics on Feb. 10. But he said he has no regrets about defending human rights. In a Twitter post in February reacting to his Nobel Prize nomination, he said, “Sometimes taking a stand is more important than your next paycheck.”

Housakos praised Freedom for his commitment to speaking out at the cost of his career.

“Despite the unfair targeting and treatment he has been subjected to by the NBA and others as a result, Mr. Freedom continues to push forward with integrity in his fight for what is right,” Housakos said.

“It is fair to say that while his on-court talents [are] noteworthy, his off-courts are even more so.”