‘I Have No Regrets’: Enes Kanter Freedom, Ousted From NBA, Vows to Continue Speaking Out Against CCP’s Abuses 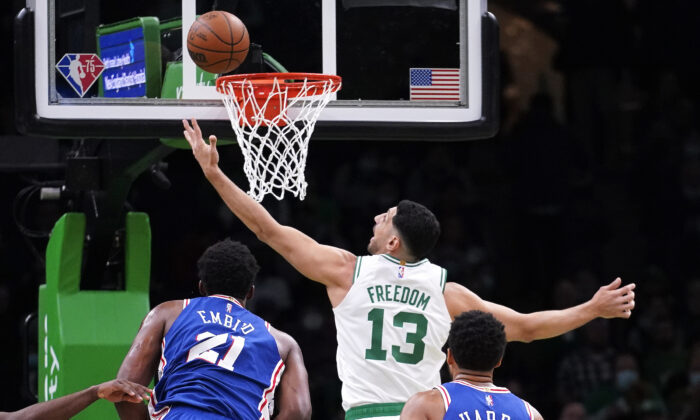 Basketball player Enes Kanter Freedom, who was reportedly recently nominated for the Nobel Peace Prize and is currently without a job in the NBA, received a warm welcome from U.S. senators at an awards ceremony last week for his continued activism against the Chinese Communist Party’s (CCP) human rights abuses.

“You can talk about all the social justice, all the injustices happening all around the world. But when it comes to China, you cannot speak up,” Freedom said of the NBA at an awards ceremony hosted by the advocacy group Committee on Present Danger: China on Feb. 17 in Washington. “If you do, then you’d have to face the consequences.”

Freedom was released by the Houston Rockets soon after being traded from the Boston Celtics on Feb. 10. He was one of the highest-rated backup centers statistically in the NBA, and believes that his activism cost him his career.

“I want to tell you guys that I have no regrets,” Freedom said, noting that there are “more important things besides money and business, such as morals, principles, and values.”

Freedom said that after he learned about all of the persecution and human rights violations committed by the CCP, if he didn’t speak out against it, he wouldn’t be able to sleep at night.

Born in Switzerland on May 20, 1992, Enes Kanter later moved with his family to their native country of Turkey. He changed his name to Enes Kanter Freedom upon becoming a naturalized U.S. citizen on Nov. 29, 2021.

The basketball player attracted attention for wearing basketball shoes during NBA games with various works of art that included slogans such as “Free China, Free Tibet,” and “Stop Organ Harvesting in China.”

In 2019, the China Tribunal, a non-governmental people’s tribunal based in London looking into forced organ harvesting in China, found that the CCP had committed crimes against humanity because of its forced harvesting of organs from prisoners of conscience.

The tribunal found that the main source of these organs was imprisoned Falun Gong practitioners. Falun Gong is a spiritual practice that has been brutally persecuted by the Chinese regime for more than two decades.

Freedom himself has been persecuted by the Turkish government, despite his representing Turkey in International Basketball from U-16 competitions to playing with the senior national team in 2011.

He’s unable to return to Turkey or travel overseas, as there’s a warrant out for his arrest with Interpol because of his open criticism of human rights abuses by Turkish President Recep Tayyip Erdogan. His father has been arrested for the same reason.

In high school, Freedom declined to play for two European basketball franchises and moved to Simi Valley, California, in 2009 to attend Stoneridge Preparatory School and became a five-star basketball recruit. He committed to the University of Kentucky, but was deemed ineligible because of his being paid by Turkish professional sports club Fenerbahce in his youth.

He then entered the 2011 NBA Draft and was picked third overall by the Utah Jazz. He had played with five NBA franchises before his recent release.

His philanthropic work includes hosting free basketball camps in the United States, beginning with 16 camps in the summer of 2018. Fifty camps were hosted in 2019, and Freedom planned another 50 camps for 2020, but was unable to do so because of COVID-19 mandates.

It was at one of the camps that a mother called him out “in front of everybody” that he learned about the crimes against humanity committed by the CCP, he said at the ceremony.

“‘You call yourself a human rights activist when your Muslim brothers and sisters are in concentration camps and getting tortured and raped every day,'” Freedom said the woman told him. “I was shocked. I couldn’t say anything.”

He said he “turned around to that parent and I promised, ‘I will get back to you.’ So, that day I canceled everything. I went back to my hotel and started to study and started to learn about what’s going on over there.”

The basketball player recalled the aftermath of a 2019 Twitter post by then-Houston Rockets General Manager Daryl Morey in support of pro-democracy protesters in Hong Kong. The Twitter post, though swiftly deleted, ignited a firestorm of anger in China, with Chinese sponsors of the NBA pulling out of deals and disrupting internet streaming of games in the country.

“[The] NBA wanted to silence everybody,” Freedom said. “I got a call from my agent … ‘The whole Chinese government [is] watching your Twitter—do not say anything.’ And the Celtics made media unavailable for two weeks.”

He said he’ll continue to stand up for what he believes in, as his mother taught him to do when he was young, even if it results in him losing everything.