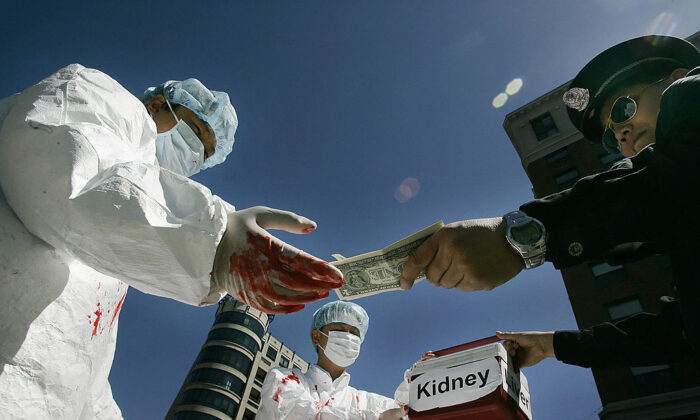 The World Summit on Combating and Preventing Forced Organ Harvesting is highlighting media silence on one of the greatest atrocities of our time: a billion-dollar forced organ harvesting industry in China.

The Chinese Communist Party (CCP) has used its gatekeeper role over the immense economic power of China, as well as its political influence campaigns abroad, to silence global media and influence nations and international organizations globally on the human rights atrocity of forced organ harvesting. The summit, held between Sept. 17 and Sept. 26, sheds light not only on this, but on what one participant has called a “diplomacy of silence.”

Despite incontrovertible evidence, Beijing denies that it’s currently conducting forced organ harvesting and has gotten the World Health Organization (WHO) to support the CCP’s denials. But the WHO’s assessment is faulty. According to Lord Hunt in the UK, “It was revealed by the UK government in 2019 that the World Health Organization’s assessment is based on China’s own self-assessment and that the WHO has not carried out its own assessment of [the] Chinese organ transplant system.”

Organizers of the summit have demonstrated that CCP pressure has decreased media coverage of forced organ harvesting in China, leaving nations and international organizations with little incentive to take the costly steps necessary to address the problem.

“Many members of the news media have failed to report truthfully on this atrocity but bowed to CCP pressure and published paid propaganda instead,” the organizers wrote on the summit website. “Societies around the world are kept ignorant of the dangers of becoming complicit with forced organ harvesting crimes.”

Dr. Torsten Trey, founder of the nonprofit group Doctors Against Forced Organ Harvesting (DAFOH) and host of the summit, stated on Sept. 17 that the summit looks “into the role of the news media and the issue of censorship.”

“By default, the first task of the news media is to report facts and truths,” Trey said. “However, another important aspect of the media is to connect people. Over the past 15 years [since The New York Times broke the story of forced organ harvesting in China], the mainstream media has failed to connect the people in the free world with the victims of forced organ harvesting in China. This separation between the readers and the victims is another, often neglected aspect of censorship.”

Trey noted that the summit is an attempt to bridge the divide between citizens and the victims of forced organ harvesting.

Dr. G. Weldon Gilcrease, director of Oncology at the University of Utah School of Medicine, told the summit that the extensive evidence of forced organ harvesting has gone unrecognized by “most of the medical community and, indeed, most of the world.”

Gilcrease attempted to stop training Chinese doctors how to perform transplants at his own university, arguing that they would likely use the knowledge to murder unwilling donors. His administration opposed him, saying that “there’s no doubt that forced organ harvesting is happening, but that taking a stance against a large, strong country such as China could be dangerous both to our institution, as well as the undergraduate and graduate schools that we serve at our university.” He was told that “if we said anything [about these atrocities], China would simply send all of its students to Texas.”

Several other summit participants called for an end to the international training of doctors from China in transplant techniques. Dr. Andre Gattolin, a senator from France and co-chair of the Inter-Parliamentary Alliance on China (IPAC), criticized “developed countries, which, in the name of sacrosanct medical and health cooperation, have proceeded without precaution to the transfer of skills and technologies which have led to the shameful abuses observed today in China.”

Gattolin said France has “widely taken part in the training of numerous Chinese surgeons in the very delicate technique of organ transplantation.”

“Our trust—granted too naively—has been betrayed,” he said. “We failed to demand a right of supervision over what might have resulted, and those who were tricked in the name of sharing knowledge and a certain scientific humanitarianism still refuse to acknowledge their share of responsibility.”

“We have many examples of this. The CCP has infiltrated so many international organizations: the United Nations Human Rights Council, the World Health Organization, the United Nations itself, managing to ensure that everything goes unnoticed, that everything is concealed, that these events can never be generally and publicly known by society and the whole world,” Jimenez said. “And they are succeeding with the complicit silence of Western governments and international institutions and international organizations.”

According to retired U.S. Air Force Brig. Gen. Robert Spalding, the CCP’s use of carrots and sticks against international democratic processes and deliberations on forced organ harvesting amounts to “political warfare.” He told the conference on Sept. 19 that political warfare, in the form of influence through economic elites, is used to immobilize democracies to these atrocities.

“Political warfare is used to desensitize, to deflect any criticism on understanding of things like the genocide of the Uyghur population, the lockdown and control of the people of Hong Kong, the mass incarceration and organ harvesting of the Falun Gong, and the outright oppression of … certain elements of the Chinese population, particularly those that … the Chinese Communist Party fears,” Spalding said.

Françoise Hostalier, a member of the French Parliament, said that the failure to acknowledge that Chinese leaders are operating on discrepant moral and ethical principles is due to the country’s global influence.

“China is an unavoidable economic partner, which is increasingly successful in many scientific fields, and which is bringing more and more territories and countries under its domination,” Hostalier said. “There is a great risk that our researchers, doctors, laboratories, industrialists, and students, through scientific or economic exchanges, will find themselves complicit in the inhuman and criminal practices of their Chinese counterparts, which are contrary to all ethics, but without being aware of it.”

Hermann Tertsch, a member of the European Parliament from Spain, criticized the mainstream media for failing in its duty to cover the crimes of the CCP.

“The criteria of the media world, which has hegemony over the world’s communication, are criteria that have been increasingly defined in one direction over the last 50 years, and it is in this direction that the crimes committed by the Chinese dictatorship are treated in such a benevolent way,” Tertsch said.

“[Images critical of the CCP] have been disappearing from the networks, not only in the Chinese networks, where nothing can be found about that tragedy of 32 years ago [the Tiananmen Square massacre], [but] also in the Western media, by Chinese desire or by the desire of so many of China’s partners, as we have among those who applaud in Davos, with those who applaud Xi Jinping, the great giants of the big takers of the big technology companies, of the big networks, we all know their names.”

He said we’re indulgent of CCP crimes because “they manufacture a lot there, because they have many economic relations, because they admire the model, because they want to apply a similar model.”

Democracies in the West could hold the CCP accountable, Tertsch said, but “they prefer a big globalist regime where every person is anonymous and interchangeable and we can take organs from one person and give them to a higher bidder or to someone who suits us for some reason.”

Economic interests, he said, “lead these Western elites to be complicit with the Chinese Communist Party … to hide the monstrosity of the transplants, which are taking away, we do not know how many thousands of political prisoners, of common prisoners, of people from the Falun Gong movement, of dissidents.”

The world has a responsibility to face squarely the atrocity that is forced organ harvesting. That it’s mostly imposed on highly vulnerable populations in China, namely Falun Gong practitioners and potentially the Uyghurs as well, and that these populations have been targeted for cultural eradication, brings forced organ harvesting to the level of a means of genocide, per the U.N. definition.

As forced organ harvesting is also a commercial medical procedure, those who support human rights face an entirely new type of crime against humanity: medical genocide for profit. The mainstream media must do a better job of covering this issue, or it loses any claim to be an unbiased conscience of the community.