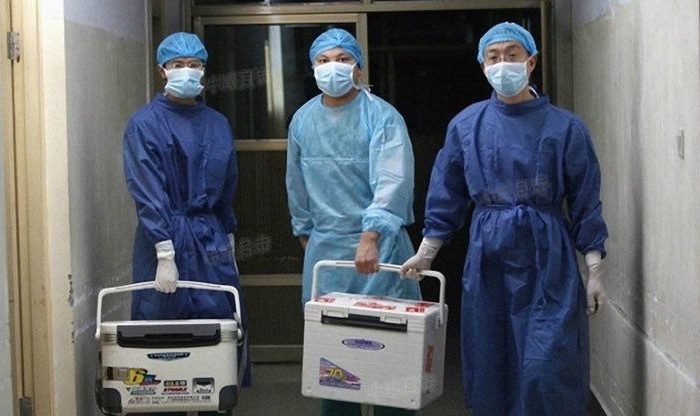 Doctors carry fresh organs for transplant at a hospital in Henan Province, China, on Aug. 16, 2012. (Screenshot via Sohu.com)
Thinking About China

The World Summit on Combating and Preventing Forced Organ Harvesting covered the means to stop the atrocity of forced organ harvesting in China, including a universal declaration, economic sanctions against the Chinese Communist Party (CCP), and bans on international training of transplant surgeons from China.

Organizers of the summit, held between Sept. 17 and Sept. 26, have called upon the legal profession and international community to take incontrovertible evidence of forced organ harvesting more seriously and work to end transplant abuse through specific legal measures, including individualized Magnitsky sanctions against the CCP’s worst perpetrators, national laws that criminalize those who participate in forced organ harvesting domestically, and an end to the international training of transplant surgeons from China.

“The legal profession is called upon to enact an end to this unacceptable crime against humanity,” the summit website reads.

Dr. Weldon Gilcrease, director of Oncology at the University of Utah School of Medicine, has called for holding accountable all those medical professionals and others who have collaborated over the years to China’s illegal transplant system.

Changes to commercial relations are also required, according to Dr. R. Scalettar, former chair of the American Medical Association.

“There should be no conflicts of interests such as payments for and commercialization of transplants,” he said.

Such conflicts can be banned by legislation at the national and international levels.

Israel, Spain, Taiwan, Italy, Belgium, Norway, and South Korea have been leaders in enacting legislation to prevent transplant tourism, according to Lord Philip Hunt of the UK and two international human rights lawyers, David Matas from Canada and Carlos Iglesias Jimenez from Spain.

This could include the censure and loss of license of complicit medical professionals, as well as litigation, according to Scalettar. If you violate medical ethics on forced organ harvesting, “you’re out of business,” he said.

Jimenez called on people and governments to speak up and legislate against international forced organ harvesting.

For Jimenez, silence is complicity.

“Justice, in the future, will not only judge those who are guilty of these crimes, but also all those people whose complicit silence has facilitated, made it possible for all these atrocities to take place,” he said. “They will have to answer to justice.”

Theresa Chu, a lawyer with the Taiwan Falun Gong Attorney Group, introduced the idea of the Universal Declaration on Combating and Preventing Forced Organ Harvesting (UDCPFOH), an international document that denounces forced organ harvesting by the CCP and proposes measures to prevent it from “gravely violating the value of human existence.” The document was formally released on Sept. 26, the summit’s final day.

“The UDCPFOH builds on the foundation of inalienable rights which cannot be deprived by any person or regime and lays bare the core principles to the universal values, including the inviolability of human dignity and the fundamental protection for human life, body, and freedom,” Chu said.

It calls on nations and international organizations to “bar entry to any person known to be directly or indirectly participating in forced organ harvesting,” she said. It also urges “medical professionals not to train Chinese doctors or medical personnel in transplant surgery and shall urge medical journals to reject publications about the ‘Chinese experience’ in transplant medicine.”

“All governments shall urge the Party-State of China to cease the repression, imprisonment and mistreatment of Falun Gong practitioners and any other prisoners of conscience; to cease the forced organ harvesting of all prisoners; to open all detention centers and camps for free and independent international investigation of the crime of forced organ harvesting,” the article reads.

Chu recommended the enactment of a “Universal Act Against Forced Organ Harvesting.”

Judge Song Kim, of the Seoul Administrative Court in South Korea, proposed the utilization of Global Magnitsky Sanctions to prevent forced organ harvesting in China. Given that China is a permanent member of the U.N. Security Council and that the 193 U.N. members would find it hard to agree on a resolution against forced organ harvesting, Song argued that “autonomous sanctions by individual countries” or a “Magnitsky alliance” is a better short-term goal.

U.S. sanctions could ban anyone complicit in forced organ transplants from entering the United States. This has more effect than normally acknowledged, Chu pointed out. She cited statistics that in 2017, 85 percent of high-ranking officials in China were preparing for an overseas escape. Between 1995 and 2008, she said that more than 18,000 Chinese officials fled China and smuggled out $145 billion.

“Thus freezing their overseas assets and banning them from entry into overseas countries can be a significant threat to them,” she said. “It means involvement in the human rights abuse like forced organ harvesting could be a big risk for their future.”

Dr. Andre Gattolin, a senator from France and co-chair of the Inter-Parliamentary Alliance on China (IPAC), told the summit that IPAC has had many successes in raising awareness of the China threat, but is “still struggling to mobilize on … the question of China’s increasing interference in the Western academic and scientific world, and the scandal of forced organ harvesting and the violent repression of Falun Gong followers on Chinese territory for the past 22 years.”

Minnesota state Sen. John A. Hoffman said he has worked with other legislators “to support a resolution calling on our nation to go and be opposed to these grievous violations of basic human rights.”

“Those efforts have not succeeded yet, and it may be because of relationships with the perpetrator of this crime,” Hoffman said. “That relationship [is] an economic tie with many nations, that … some wish to treat gently, as horrific actions exist in international and intentional silence, so that [only] a few know what is happening.”

Gattolin explained that in France, “when one questions the forced removal of organs in China, one quickly runs the risk of being labeled as heavily anti-communist or anti-Chinese.” He said that raising this “almost taboo” question exposes oneself to “scathing and outraged denials and sometimes even to threats of commercial or political retaliation from Beijing.” He called the result a “diplomacy of silence.”

To overcome this silence, several measures are needed. First, there must be public education about the reality of forced organ harvesting in China, and how it’s focused against Falun Gong practitioners. Second, democracies and their allies must enact tougher legislation against domestic cooperation with global transplant abuse, including through stronger laws against transplant tourism.

Third, Magnitsky sanctions need to be imposed on the individual leaders and transplant surgeons involved in initiating and executing forced organ harvesting. These sanctions should include those at the top of the CCP hierarchy, including all members of the Politburo Standing Committee of the CCP. Fourth, international economic sanctions should be imposed against the Chinese economy as a whole in order to stop what should be considered a medical genocide for profit. And fifth, governments around the world should make a concerted effort to publicly recognize and assist the victims and families affected by this most shocking case of transplant abuse.