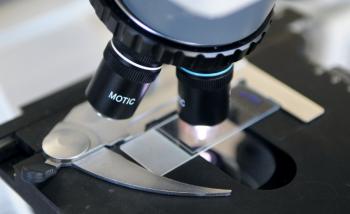 Microalgae under the electron microscope. Studying microalgae and bacteria can give us a new approach to fighting infections. (Eric Piermont/AFP/Getty Images)
Science

Arshdeep Kaur
View profile
Follow
biggersmaller
Print
Bacteria infect host cells, often using toxins, and shield themselves with inbuilt protective mechanisms. These pathways could become their “Achilles’ heel,” according to researchers from Washington University in a study published on Feb. 9 in the journal Structure.

The team looked at the common bacteria Streptococcus pyogenes to determine the structures of its toxin and antitoxin. The antitoxin deactivates the toxin by binding to it. When not bound, the antitoxin changes shape.

“That’s the Achilles’ heel that we would like to exploit,” said Dr. Thomas Ellenberger, head of the university’s Department of Biochemistry and Molecular Biophysics, in a release. “A drug that would stabilize the inactive form of the immunity factor would liberate the toxin in the bacteria.”

Experts say that the bacterium protects itself from the secreted toxic by keeping it in an inactive form, by counterproducing its antidote. When toxin complexes with the antitoxin molecule (immunity factor), it remains inactive and is unable to cause any harm to the host or the bacterial cell itself.

The bacteria’s toxin is called Streptococcus pyogenes beta-NAD+ glycohydrolase, or SPN. Cells store the coenzyme NAD+ as part of their metabolism, and the toxin works by draining these stores. The bacteria’s energy supply is protected by the antitoxin, the immunity factor for SPN (IFS), which blocks the toxin’s access to NAD+.

“The most important aspect of the structure is that it tells us a lot about how the antitoxin blocks the toxin activity and spares the bacterium,” said Ellenberger.

Understanding how these bacteria cause disease in humans is important in drug design.

“There is a war going on between bacteria and their hosts,” said coauthor Dr. Craig Smith, a postdoctoral researcher at the university, in the press release. “Bacteria secrete toxins and we have ways to counterattack through our immune systems and with the help of antibiotics. But, as bacteria develop antibiotic resistance, we need to develop new generations of antibiotics.”

Antibiotics work in different ways; some block bacterial cell wall synthesis, while others interfere with DNA synthesis or even inhibit bacterial metabolism.

As of yet, there are no classes of drugs that attack the protective antitoxin mechanisms of bacteria.

“Obviously they could evolve resistance once you target the antitoxin,” Ellenberger said. “But this would be a new target. Understanding structures is a keystone of drug design.”