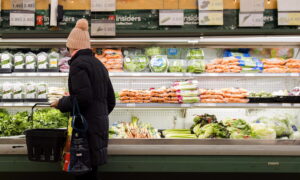 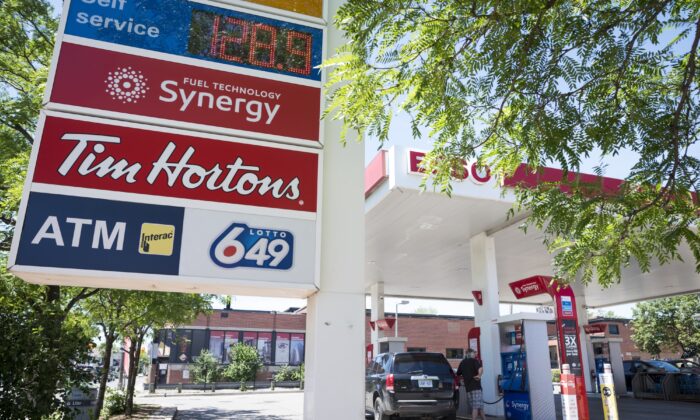 A commuter pumps gas at an Esso gas station in Toronto on June 15, 2021. As the price of oil rises, the cost of many goods in the economy are also going up. (The Canadian Press/Tijana Martin)
Economies

As Inflation, Oil Prices Keep Rising, Is Stagflation Next for Canada?

Inflation is proving to be a thornier issue than central banks once thought. With soaring energy prices, the more troubling economic prospect of stagflation reminiscent of the 1970s has entered the discourse in financial markets; however, analysts say that risk is minimal.

Stagflation is generally thought of as inflation above the central bank’s target range while the economy slows or contracts—economic stagnation with rising inflation.

Stagflation puts central banks in a quandary, as raising interest rates to fight inflation would only dampen economic growth further. For households, stagflation makes everything cost more while their incomes decrease as unemployment rises.

As earlier in the year when Google searches for “inflation” reached an all-time high, searches in Canada, the United States, and the United Kingdom for “stagflation” have started trending higher.

In Deutsche Bank’s October 2021 survey of over 600 market professionals from around the world, the consensus is that stagflation of some kind—three versions of it were posited—is more likely than not over the next 12 months.

Nevertheless, Deutsche Bank’s head of thematic research Jim Reid said he thinks the term “stagflation” is being used “too aggressively at the moment.”

BMO senior economist Sal Guatieri told The Epoch Times that the stagflation risk is limited since the demand fundamentals in Canada’s economy are solid. He points out that households are sitting on excess savings, wealth from elevated stock markets and housing remains high, interest rates are extremely low, and the government is spending.

“You would also need some kind of adverse demand shock—could be an equity market correction, a housing market correction that hammers demand, so you end up then with weak economic growth, and possibly a contraction that sends your unemployment rate higher,” he said.

“It won’t be your father’s thing—stagflation. We’re not going back to the 1970s era of double-digit jobless rates and inflation rates.”

Back then, oil prices skyrocketed and inflation followed suit. It peaked at over 12 percent in late 1974. The economy hit a recession in the early 70s and growth fell close to zero.

Canada’s inflation was up 4.1 percent for the year ending in August—an 18-year high—and some economists say this official figure underestimates the true cost of living. Canada’s economy contracted by 0.3 percent in the second quarter; however, that was largely due to lockdowns.

What is working in Canada’s favour is that economic growth is projected to remain robust for the near term. The International Monetary Fund published its economic outlook projections on Oct. 12 and estimated that Canada’s economy will grow 5.7 percent in 2021 and 4.9 percent in 2022.

Thus, what is propelling the stagflation narrative is not weakening economic growth, but rising inflation and oil prices. The debate is whether or not inflation is transitory—a favoured word of central bankers to characterize inflation in the current environment.

Guatieri said that he sees inflation staying higher for longer than the consensus view, but that ultimately it will prove transitory. This is because he expects some of the supply chain bottlenecks will be resolved.

“We do expect inflation to persist around current levels if not higher for the next six months or so,” Guatieri said.

Bank of Canada governor Tiff Macklem said on Oct. 7 that high inflation could be “a little more persistent” than what the BoC previously thought, but that he still believes it is transitory, reported The Globe and Mail.

According to Deutsche Bank’s survey, the minority that views inflation as “mostly permanent”—not transitory—is growing and stands at 31 percent.

Aside from supply chain issues and soaring energy prices, inflation expectations also play a role in determining where actual inflation is heading.

BMO’s Oct. 8 note examined current metrics and existing surveys of inflation expectations and concluded that if expectations rise significantly, it “would signal a more lasting and sustained shift in the inflation outlook.”

However, in the United States, longer-term inflation expectations, as measured in the bond market, have pushed above 2.5 percent.

“The steady upswing in a variety of longer-term U.S. expectations metrics, the increased public focus on inflation in recent months, and the sustained strength in energy prices all suggest that Canadian expectations may also shift in a more meaningful way,” BMO said.

U.S. inflation expectations could spill over into Canada, Guatieri says.

“If inflation expectations deteriorate in the U.S., they probably will deteriorate in Canada, given similar external forces and broadly similar economic situation,” he said.

More Power to the Worker

Rising wages can fuel higher inflation, and Reid noted that the mounting mention of unions in environmental, social, and governance (ESG) disclosures hints at a world of more labour power.

“Since the pandemic started, workers have seemingly become increasingly empowered, particularly low-wage or low-skill workers. The question is whether this is transitory (the word of 2021),” he said in a note to clients on Oct. 7.

“The move towards ESG, social responsibility, and social justice suggests it might not be. Also higher wages offered due to staff shortages now will be difficult to reverse when normality returns.”

Companies with lower-wage unionized staff may need to prepare for rising wages over the long term, Reid added.

Macklem said there is currently little indication that wages are rising faster than productivity growth and becoming an independent driver of inflation.