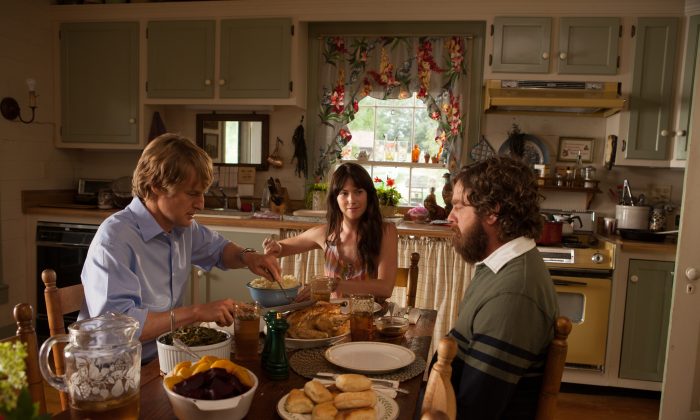 “Are You Here.” Excuse me, but what does that mean? Is who here? It’s like that other recent movie title: “And So It Goes.” And so what goes? Does anyone know who or what they’re talking about?

Both movies also have in common (besides unintelligible titles) the fact that they are major wastes of time.

We don’t know what “Are You Here” means, but what we do know is that Owen Wilson is Steve Dallas, a weatherman. Or maybe he’s a weatherman-ish boy. Or weatherboy-ish man.

Either way, he’s a cad who takes girls to dinner using maxed-out credit cards (so they have to pay) and who’s terminally frustrated by the massive tree in his courtyard that gets in the way of his binocular-ing of the girl across the way, as she gets ready to take one of her million showers. Steve puts in a request for tree removal.

Zach Galifianakis is Ben Baked. Oh, excuse me, that’s Baker. Steve’s best bud. The word bud is used here in all of its modern meanings.

It’s always a challenge to describe the characters Mr. Galifianakis plays, so let’s just say that Ben might be a kind of arrested-development, hippie-activist, writer … dude. Yeah, that about covers it.

It might be a comedy, because one day Ben shows up at Steve’s job and grapples with the big black female security guard. Picture Zach’s trademark fuzzy Dionysus beard, as his character grapples with an officious, large-hipped woman.

That might start to be funny, but then Ben relates that his dad just died. Which might be sad, so Ben and Steve go to the funeral.

Now, Ben’s dad owned a grocery store. He was very, very old. And he had a much, much, much, younger wife named Angela (Laura Ramsey). Which might be disgusting.

But Angela’s an outstandingly charming hippie-chick, who, while clearly having daddy issues (gotta be, right?), is also pretty and highly intelligent and articulate. So one wonders whether Angela might be after Ben’s dad’s bucks.

Ben’s sister Terri (Amy Poehler) is all kinds of livid when she finds out dad left the store, the farmhouse, and millions of dollars to nut-job Ben, in his will.

Meanwhile, Steve’s falling for Angela, who then at some point has pity, er, “relations,” with Ben—which might make it all a bit complicated.

And the movie becomes increasingly silly and useless. And confusing? Nevermind about confusing. You won’t be awake long enough to get confused.

Are You Still Here?

There are numerous contrived setups for gags that are just too over-to-top to work. The movie isn’t “Dumb and Dumber.” Although, considering what we said about the title, it’s too bad that one was already taken. It would have been a perfect fit. Maybe a better fit.

For example, as mentioned, Ben’s an activist of sorts. They drive by a bait shack. Ben makes Steve circle back, and drops a hundred dollars to buy up all the crayfish, taking a zealous, bait-compassion stand.

Steve offers, “I’m not arguing with the spirit of ‘Operation Crayfish.’ I’m just saying it was overfunded.” Yes it was. This is a glaring inconsistency in the writing of Ben’s character! Ben would never buy $100 worth of crayfish. He would buy $100 worth of weed.

The ever-funny Amy Poehler is here completely wasted. No, not like … nevermind.

The best thing about “Are You Here” is that Laura Ramsey is here. May she be here more.

Ben and Steve do experience some minor bits of growing up. Like Steve’s reaction to getting his wish about having the big oak tree chopped. Go spend $13 to find out how he feels about that!

We finally figured out the meaning of the title. “Are You Here” is a question to the audience. Audience response: “No.”