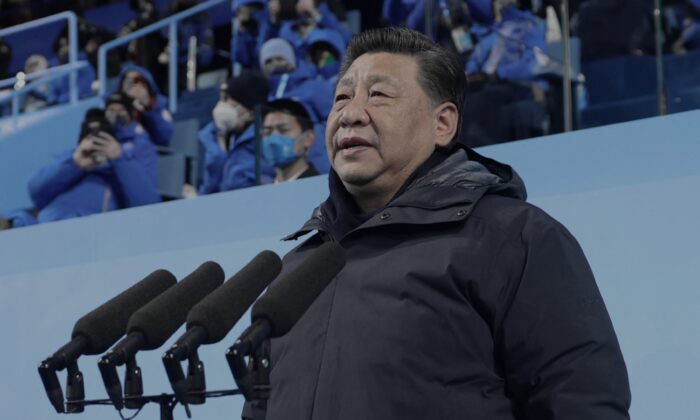 An article criticizing Chinese leader Xi Jinping was allowed to go viral in mainland China, which analysts say reflects the intense struggle among different factions within the Chinese Communist Party (CCP) and its effect on Xi’s authority.

While Xi amended the Party’s constitution successfully in 2018 to eliminate term limits, China experts have said he might not secure an unprecedented third term, a decision that will be revealed at the CCP’s Party Congress this fall.

“The 40,000-word article listed mistakes that Xi Jinping has made in politics, economy, and diplomacy. It’s a summary of Xi’s ruling over the past nine years,” Li Hengqing, a China expert at the Washington Institute for Information and Strategy, told the Chinese-language edition of The Epoch Times on Feb. 8.

“After 2018, we all said that there’s no force to stop Xi from taking a third term. Now we can see that the situation isn’t simple, and it’s unclear whether he can obtain it.

“The article circulated broadly inside and outside of China. Even several friends from mainland China forwarded it to me. … It shows that the CCP factions against Xi are fighting to stop him from continuing in office.”

Xi rose to become China’s leader in November 2012, and won a second term in October 2017. While the previous version of the CCP constitution ruled that each leader was limited to two terms—which would require Xi to retire this year—the constitutional change has paved the way for him to stay in the role if he can secure support from the rest of the Party leadership.

On Jan. 19, an author under the pen name “Ark and China” published the article “Evaluate Xi Jinping Objectively” on overseas Chinese blogs. Since the Chinese New Year on Feb. 1, the commentary on Xi’s leadership has gone viral among readers inside China.

Taiwan’s state-run Central News Agency (CNA) reported on Feb. 9 that people in China had spread the article widely even as the piece was censored by the Chinese regime.

The commentary reviews Xi’s performance over the past decade regarding his anti-corruption campaign, the Party’s continuing campaign to eradicate independent religion and beliefs, human rights abuses, its tight surveillance and control of the people, enhancement of propaganda, further revision of children’s textbooks and history books, the strengthening of state-run enterprises and suppression of the private sector, conflicts with the Western world, and winning over developing countries by squandering the national treasury.

The author said Xi doesn’t have the capability to rule the country and has angered CCP officials who opposed him as well as some who supported him when he took office. Meanwhile, while the people’s lives are being encroached upon, their voices can’t be heard because of the regime’s censorship.

“At present, it’s difficult for him to continue his rule. The year 2022 will be his biggest turning point,” the author wrote. “Even if he miraculously secures another term, he will face more difficulties and complete failure before 2027.”

The author lists three factors that could cause the collapse of Xi’s rule, alongside a predicted worsening of the political situation. The essay indicates that achievements claimed by Xi are fabricated, the political foundation of his authority has been destroyed, and “the entire CCP bureaucracy” is opposed to Xi and his handful of supporters.

“Don’t treat the CCP as a political party! It’s actually a political gang. Like the former head of the Soviet Union Vladimir Lenin said, the communist party grows by fighting internally and cleaning (killing) its members,” Cai Xia, a former professor of political ideology at the CCP’s Central Party School, wrote in an opinion piece on Feb. 6 that was published on the U.S.-based Chinese media Yibao.

“Due to the cruelty and bloody infighting within the party, all senior officials understand the hidden rule, which is to choose a faction and fight for it without thinking about what’s right or wrong.”

Li told The Epoch Times that those within the Chinese regime who oppose Xi are gathering.

“They are using all their resources and solutions to block Xi from taking the next term,” he said.

“The [viral] article is echoing the opinion of Chinese politicians. It stands on the point of maintaining the CCP’s rule in China but removing Xi Jinping,” Chen Weijian, a New Zealand-based Chinese dissident and editor of online magazine Beijing Spring, told the Chinese-language edition of The Epoch Times on Feb. 8.

“At the Sixth Plenary Session of the rubber-stamp legislature’s 19th conference, the CCP factions presented their severe disagreements [on regime policies]. [The long article] is the latest bomb that the anti-Xi faction has detonated amid the factional fighting,” Gao Wenqian, former official biographer of Zhou Enlai, the CCP’s first premier, told VOA on Feb. 8.

Gao said that the CCP’s rigid dictatorship is growing increasingly fragile, and may break at any time.

Cai listed the crises the regime in Beijing is facing across China now, which include more white- and blue-collar unemployment, the financial crisis facing China’s largest real estate predators, the regime collecting more tax and fees from people who can’t earn a living and unprofitable enterprises, strict COVID-19 policies that further damage the economy and threaten peoples’ lives, and young Chinese who refuse to have children even after marriage.

“This is a strong article that can drive public opinion against Xi,” Cai wrote.