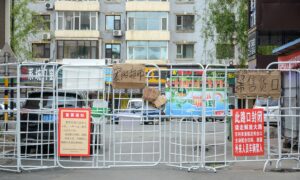 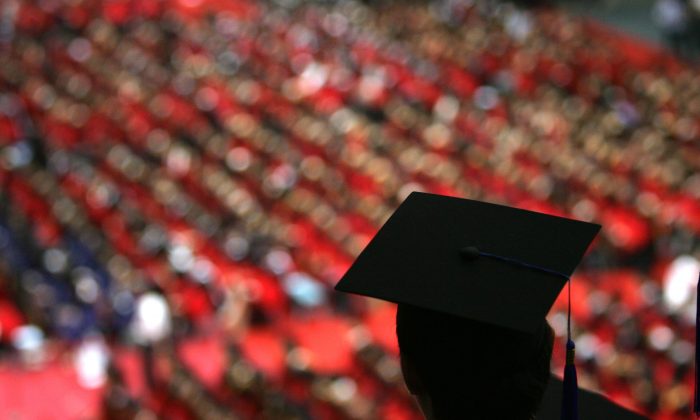 A graduation ceremony for master's and doctorate students at Tsinghua University in Beijing on July 18, 2007. (China Photos/Getty Images)
China Society

(Another) Chinese Professor Punished for His Speech

In the latest instance of Chinese authorities clamping down on academic speech, a Chinese professor recently was disciplined for making remarks criticizing China’s education system.

Zhao Siyun, 51, is vice-president at the literature institute of Zhejiang University of Media and Communications, a public university in Hangzhou, Zhejiang Province.

During a Sept. 30 welcoming ceremony for new students, Zhao criticized the state of education in China, lamenting that the school system had failed to nurture students’ creativity, innovation, and concern for society.

He spoke of the need for students to have independent thought, and to embrace the concept of “the public intellectual”: “an idealist with the spirit to criticize and the willingness to uphold morality.”

“Only one who is filled with profound love for one’s country and people will criticize the dark side of society,” he said.

He posted a copy of his speech on his social media account. A few weeks later, on Oct. 8, the local newspaper Qianjiang Evening News also republished it.

The remarks did not sit well with the university authorities.

On Oct. 12, the university’s Communist Party committee issued an administrative penalty to Zhao for his “inappropriate choice of words.” The school also noted that between 2013 and 2015, he posted or republished “wrong opinions and speech, causing a certain level of negative influence.”

Following the news of Zhao’s punishment, many netizens expressed that they believed Zhao had the right to say what he did. Chinese media reports and social media posts regarding Zhao have since been censored.

But before the internet censors took action, netizens were able to track Zhao’s old posts on Sina Weibo, a popular platform similar to Twitter. In an August 2013 post, he commented on a post vouching for eliminating Chinese Communist Party organizations in schools. These organizations are established in virtually all workplaces to ensure employees toe the Party line. Zhao had commented on Weibo, “Guiding university students to take the civil servants exam: that is the downfall of the entire system.”

In July 2014, Zhao reposted comments lamenting that education “became a vassal of politics” after universities came under Party control.

Zhao’s case is the latest amid a string of professors getting punished for expressing opinions in their classrooms that were deemed too critical of the status quo or the Party. In some cases, it was the students who ratted out their teachers and reported their “offending” speech to the school’s Party committee. The students are sometimes Party informants assigned to each class.

Yang Shaozheng at Guizhou University was fired from his post in August after making remarks advocating constitutionalism and rule of law.

That same month, 84 year-old retired professor Sun Wenguang was taken away by police from his home while on a live telephone interview with Voice of America.

China commentator Xia Xiaoqiang said that the Chinese regime’s crackdown on speech is the latest example of tactics widely used: punishing one individual to send a message to others.