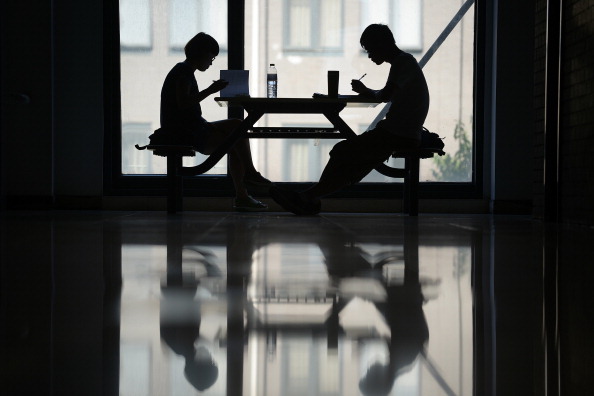 Chinese students study in a building at a university in Beijing on May 30, 2013. (Wang Zhao/AFP/Getty Images)
Chinese Regime

China maintains strict control over what its citizens can and cannot say. But recently it has come to light exactly how teachers in China’s classrooms are being closely monitored by the Chinese regime.

Xu Chuanqing, an associate professor at Beijing University School of Civil Engineering and Architecture, was given an administrative penalty in April for comments she made during class in September 2017 that were deemed inappropriate by school authorities, Taiwan’s Central News Agency (CNA) reported on June 3. A student in her class tipped off the school authorities about Xu’s comments, where she called the Chinese an inferior ethnic group, and the Japanese more superior.

Xu later defended her remarks, according to CNA, saying that her words were taken out of context. She said at the time that she was telling students that if they didn’t work hard enough, the Japanese could surpass the Chinese in certain fields.

Xu’s case of a student acting as an informant against his own teacher is not an isolated incident. In May, a leaked Ministry of Education document revealed that Di Jiehong, an associate professor at Zhongnan University in Wuhan, the capital of central China’s Hubei Province, was ratted out by her a student. Di reportedly criticized China’s constitution, state-owned firms, and rubber-stamp legislature, the National People’s Congress (NPC), on April 25.

The university’s Party committee has since stripped her Chinese Communist Party (CCP) membership and revoked her teaching qualifications.

This informant culture has long been part of the education system under the Chinese Communist Party, said You Zhaohe, a former philosophy professor at China University of Political Science and Law in Beijing, in an interview with The Epoch Times.

“When I was in college, I knew that there were informants, and they were in every class,” said You. “But nobody knew who these people were because every one of them looked like an average student.”

Professor You elaborated that student informants had a direct line of communication with the school’s Party committee, which reported to the local higher-ups within the Party bureaucracy. The purpose of having such a culture in the classroom was for the Chinese regime to hold a tight grip on what teachers can say in class—and subsequently, what students could learn in class.

“Teachers could only teach within the boundaries set up by the Chinese regime with its ideological thoughts and documents,” said You.

In May 2013, the Chinese regime issued an internal order to university professors about the “7 Don’t Speaks,” which listed topics such as civil rights and freedom of the press to be off-limits in any classroom discussion. In the same month, China’s Ministry of Education issued an educational directive that listed 16 recommendations for the country’s universities. The directive instructed professors to toe the Party line by “strengthening and improving young teachers’ ideological and political thinking.”

Turning students into informants begins before they even enter higher education, said Wang Jun, a researcher with the Unirule Institute of Economics, a Beijing-based think tank, in an interview with The Epoch Times.

“Elementary school students start informing on each other, and they are encouraged to do so in the name of being a good student,” said Wang.