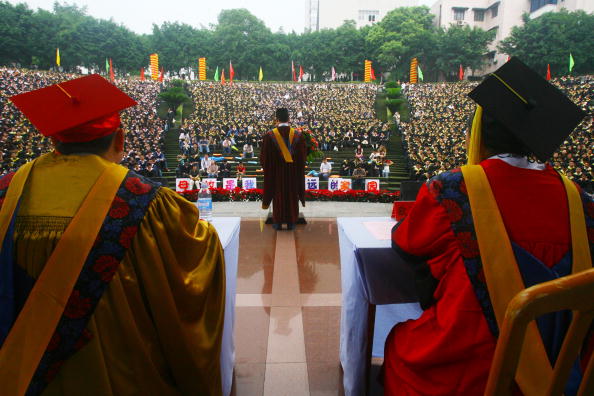 Recent cases of Chinese professors being punished for comments they made have revealed the long arm of the Chinese regime’s control over university campuses.

You Shengdong, an economics professor at Xiamen University in Xiamen, a city in southern China’s Fujian Province, was dismissed after a student tipped off school authorities about You’s political comments during a class in June. University higherups deemed his speech too “extreme.” Since then, hundreds of outraged Xiamen University students have taken to Weibo, a social media platform similar to Twitter, calling for You to be reinstated.

The Chinese Communist Party often uses the “extremist” or “radical” label to justify its persecution of dissidents and others critical of the regime.

Speaking with Voice of America, You said he would not be deterred by his punishment and would continue to say the truth.

“I am very dedicated to my teaching because these students come from all over the country and they use hard-earned money from their parents to devote their youth to education,” said You.

“To me, doing things or speaking about something against my conscience is a sin.”

Since the second half of 2014, Xiamen University imposed measures to prohibit professors and university staff from making comments critical of China’s constitution, policies of the Chinese Communist Party (CCP), or socialism values, according to VOA. You said he learned about the school’s regulations after a student secretly told him about the school’s plans to begin monitoring what teachers said in the classroom.

Under the Chinese regime, what students are allowed to learn and what teachers can say are all under strict control. Part of the control is enforced through an informant culture that dates back to the Cultural Revolution, when children and students ratted out their parents and teachers if their actions were considered “counter-revolutionary.”

Sun Wenguang, a former professor at Shandong University in Shandong Province, said he was worried about what he felt was diminishing academic freedom on campus. Teachers are only allowed to teach what is considered “correct” by the regime, and thus they become merely mouthpieces for the CCP, he told Radio Free Asia in an interview.

“All college and universities have resorted to different ways to strengthen Party leadership [in the school],” said Sun, adding that “students who are also Party members would record remarks by their teachers, especially comments that are more politically sensitive.”

Sun added that under such a repressive environment, students would be less willing to explore new things and speak their mind.

One Chinese professor recently decided to openly criticize the toxic informant culture that has formed on university campuses.

Wu Xiaoqiu, assistant principal at Renmin University in Beijing, said during a graduation ceremony on June 27 that there is a moral bottom line that students should uphold, including not lying and informing against their peers or mentors, according to Chinese media.

Wu said that without a moral conscience, “dreams would become nightmares, and it will cause harm to the society and other people.”

Speaking with RFA, Gao Xin, a U.S.-based freelance writer and political analyst, said the Chinese Communist Party has fostered a society that encourages people to be informants.

“People are not reporting crimes happening in society. Instead, the Party talks about informants and criticizing others as a way to secure its own power,” Gao said.