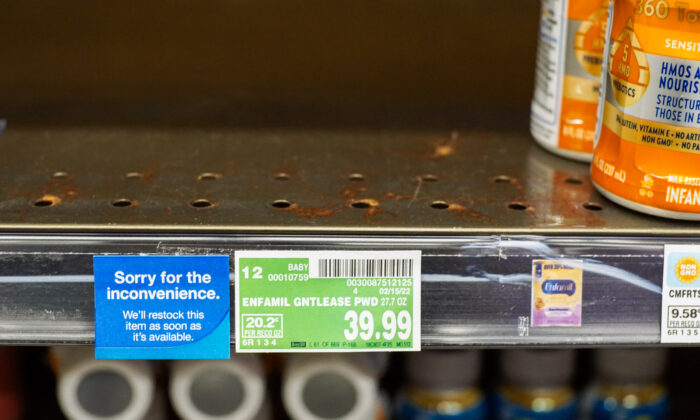 Baby formula is offered for sale at a local grocery store in Chicago, Ill., on May 16, 2022. Baby formula has been in short supply in many stores across the country. (Cara Ding/The Epoch Times)
Business Columnists

After More Than a Year of Supply Issues, Demand Woes Have Taken Center Stage

For more than a year now, the major economic story hasn’t been inflation but rather supply. This was primarily due to governments around the world overreacting to the pandemic, so businesses the world over found it exceedingly difficult to respond to recovering (sometimes boosted) economies. In very basic economics (small “e”), such inelasticity on the supply side means prices are the only factors to adjust to any change in demand.

It was never about money printing or actual inflation, rather it was merely the continuation of mainly COVID-19 politics reducing global business flexibility to answer in the necessary ways for a legitimate recovery.

Despite the general knowledge and awareness of this fundamental imbalance, for also mostly political reasons, consumer price indexes (CPIs) were purposefully intermingled with economic circumstances anyway. The more any CPI accelerated, the more it was said to have been from the “red hot” recovery (Warren Buffett) generated by the successful implementation of 2020–21 rescue efforts.

Unsurprisingly, the most vocal “CPI is the economy” proponents have been within the group which championed those purported rescues the loudest. From Larry Summers to Janet Yellen and now Paul Krugman, mainstream economists have been extolling the powers of so much “stimulus.”

The last on that list, Krugman, wrote in a tweet just the other day a perfect summation of their position: “The problem may be that the Biden economy boomed ‘too much,’ feeding inflation, and that it now needs to cool off, which may involve a recession (but hasn’t yet).”

There is a world of difference between a scorching-hot economy slowing down a tad before stabilizing (as President Biden himself has said) and one which never got going all that much to begin with before getting rocked by supply-restricted price action it therefore couldn’t afford, and after having literally paid for it, can no longer hold.

Evidence for the latter is everywhere, including the fact that six months ago no one (apart from a few of us who don’t ignore market curves) was even talking about recession, technical or otherwise. Suddenly, the word is mentioned practically everywhere, including by Krugman, a fact which already marks a material downshift in commentary surrounding the economy commiserate with the obvious downturn in circumstances.

Beyond words and more sullen interpretations, hard data are hardly lacking. According to Eurostat, for example, retail trade on a nominal, current price basis across the 19 nations of the euro-area (EA19) was 5.4 percent higher in June 2022 when compared with June 2021. Adjusting for prices, on a real basis, retail sales were instead 3.3 percent less over those same 12 months.

Paying better than 5 percent more to purchase 3 percent fewer goods does not honestly translate to “boomed too much.”

Not only that, even on a nominal basis, retail turnover in Europe is rapidly decelerating. Just since March, for example, sales (seasonally adjusted) have gained only 0.6 percent, or just 1.9 percent at an annual rate. Those figures include still-rising prices.

Removing those, deflated retail sales, from the end of March through the end of June, are falling at a heavily recession-like annual rate of 5.9 percent.

And while it might be tempting to write those consumer spending estimates off as little more than European fallout from the war forced upon Ukraine, they are instead consistent with worldwide inflections in economic demand more related to prices, particularly for oil (i.e., gasoline), which that war pushed up one too many times.

Back here in the United States, in an unrelated dataset specifically regarding demand for precisely gasoline, we find exactly that: the same destruction at, alarmingly, the same indicative proportions as those retail estimates from Europe.

According now to the American government’s Energy Information Administration (EIA), the volume of gasoline “supplied” to the entire domestic U.S. economy for every economic purpose was, in three out of the four weeks of July 2022, below the amount that had been used during the same weeks in July 2020.

I highlighted this development several weeks ago because given these unfavorable weekly comparisons to the summer of 2020—remember July 2020?—there is no better way to illustrate the night and day difference between the economy-in-theory Krugman or the others are yakking about and this starkly different reality.

The weekly EIA estimates are quite noisy, so I’ve cleaned them up by using an eight-week moving average. What that does is clearly show this unmistakable transformation in demand, at least for gasoline, when it occurred, and therefore telling us why, before we even ask the question.

It’s not just that Americans are driving less for fun—businesses must be burning less fuel, too, because the price of it can only be causing them increasing harm as well. And if companies are struggling to the point of lowering gasoline consumption (another word for demand), they probably will have to cut back on other inputs, such as hiring fewer workers, or even letting some go.

As to the latter, initial jobless claims (unemployment insurance filings) have been rising steadily since, yes, the middle of March. That’s not some random coincidence; and even if initial claims began this trend from an extreme low, it does not change the fact that the trend exists and has been steadily moving the wrong way for nearly five months now.

Bringing those together with European retail trade, along with a rash of market price changes (the Treasury yield curve inversion began in, one more time, mid-March), it paints a drastically different picture of the economic situation. No wonder markets have grown exceedingly pessimistic, while the usual (political) suspects encourage optimism that conveniently celebrates their own worldview.

Our world doesn’t have the luxury of such self-delusion.

The darkening global portrait had been sketched by mostly the colors of supply constriction up to this year. Five months ago, however, the chosen spectrum has changed to one of demand exclusively; this is a deeply ominous development.

This cannot be just some minor nuisance, a planned downturn, even, from America’s “too hot” economic boom engineered by the powerful application of government juice. No, it is a global recession already exhibiting by midyear more and more alarming signs that it could very likely be a bad one.