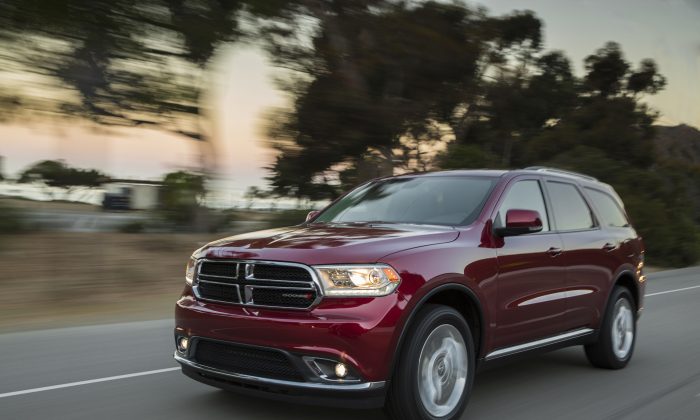 The all-new standard 8-speed transmission with rotary shifter helps to improve fuel efficiency by a whopping 15 percent. The new best-in-class driving range gives you more than 600 miles on a tank of fuel. Best-in-class towing allows you 7,400 pounds with the V8 engine and 6,200 pounds with the V6. These are just some examples of what is so impressive about this vehicle.

The 2014 model was viewed so favorably that it won first in the Best SUV Division at this year’s Texas Truck Rodeo, sponsored by the Texas Auto Writers Association in San Antonio, Texas. It defeated all contenders, which included all the other major brands.

Durango has up to 50 different seating configurations, including optional second-row captain’s chairs, along with 8.5 cu. ft. of cargo capacity.

All 2014 Durango SXT, Rallye, Limited, and Citadel trim levels feature the award-winning Pentastar 3.6 L V6 engine with 290 horsepower and 260 lb.-ft. of torque as the standard engine.

It’s mated to a new class-exclusive standard 8-speed automatic transmission equipped with a class-exclusive rotary shifter and standard paddle shifters on the steering wheel. Mileage is 18 city and 25 highway.

I not only got to drive the different trims at the rodeo, but really got to focus on the Durango Citadel at the launch in Los Angeles. Durango drove and handled superbly whether in the hills east of the city or on the coastal highways.

Through Malibu, drivers and pedestrians took note of the power sunroof and split crosshair grille. This, combined with the redesigned projector-beam headlamps to chase away the morning fog, as well as a raised front bumper made Durango even more sinister-looking.

Dodge Durango has made great strides since the first Durango was launched in 1998. That Durango drove well and had some power and style. But the new 2014 has added the latest advancements in technology while enhancing the design, capability, information, entertainment, and connectivity.

And it’s all easy enough for an old guy like me to use.

The class-exclusive Uconnect 8.4 system with 8.4” touchscreen, seatback-mounted 9-inch dual screen Blu-ray/DVD player, and the 7” customizable digital instrument cluster display are among the Durango’s new features. Characters and icons are bold and easily read, while knobs are large enough to use, even with gloves.

Again I must say how impressed I was with the interior. The soft interior materials reduce gaps where the components meet. No more trying to find lost keys or a delinquent cellphone. Two-tier storage in the center console makes for a great hideaway for those things put away at first or items that are discovered later.

There is also overhead storage that includes a covered storage bin, button for the garage door opener, and switches for the power sunroof or power Liftgate.

But it is the exterior styling that attracted my attention, and especially the diffused racetrack rear tail lamps with the 192 LEDs that won my heart. The bright bent-bow light could be seen forever, regardless of the degree of darkness or weather.

You have a choice of seven wheel designs and class-exclusive Hyper Black Treatments.