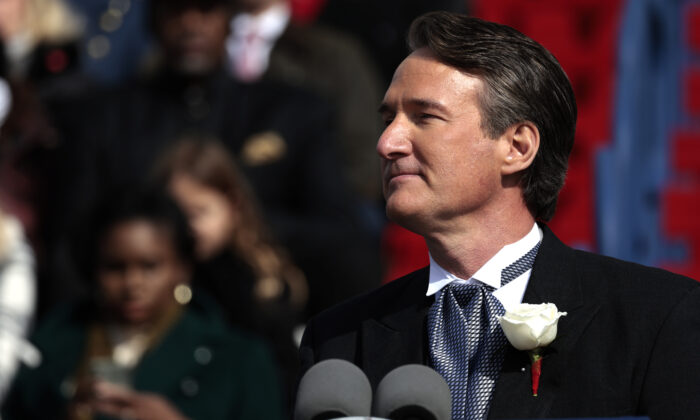 Virginia Gov. Glenn Youngkin has vowed to put a halt to his state’s requirement to follow California in adopting strict rules for vehicle emissions, calling it a “ridiculous edict” that would eventually ban the sale of gasoline- and diesel-fueled vehicles.

State officials said last week that Virginia is on track to adopt California’s new rules for transitioning to zero-emission vehicles because of a bill approved in 2021 by what was then a Democratic-controlled legislature, linking Virginia’s emissions standards to California’s.

The California Air Resources Board (CARB) recently adopted new rules to curb emissions, with a target that by 2035, 100 percent of new cars and light trucks sold in California will be zero-emission.

Republican leaders in Virginia have pledged to end the state law linking its vehicle emission standards to California’s now that the GOP controls the governorship and state House.

“In an effort to turn Virginia into California, liberal politicians who previously ran our government sold Virginia out by subjecting Virginia drivers to California vehicle laws,” Youngkin said in a statement on Twitter. “Now, under that pact, Virginians will be forced to adopt the California law that prohibits the sale of gas and diesel-fueled vehicles.

“I am already at work to prevent this ridiculous edict from being forced on Virginians. California’s out of touch laws have no place in our Commonwealth,” he added.

“House Republicans will advance legislation in 2023 to put Virginians back in charge of Virginia’s auto emission standards and its vehicle marketplace. Virginia is not, and should not be, California,” he said.

Virginia’s mechanism for reaching the zero-emission-vehicle sales threshold would start at about 8 percent in 2024. According to the program, which applies to manufacturers rather than car dealers, non-compliant manufacturers can buy credits from those that exceed the target.

After then-Gov. Ralph Northam signed the measure into law last year, the move was hailed by environmental groups and Virginia’s environment agency.

“Governor Northam signing the Advanced Clean Cars Program into law is a huge climate achievement,” Elly Boehmer, state director of Environment Virginia, said in a statement at the time.

“Virginia has answered the call for cleaner vehicles,” Rebekah Whilden, a representative for the Sierra Club’s Clean Transportation for All campaign, said in a statement after the bill cleared the legislature.

Virginia isn’t the only state that has trigger laws in place to curb the sale of new gas and diesel cars if California passes such rules; Washington and Massachusetts are also on track to adopt the stricter standards.

“Whether or not these requirements are realistic or achievable is directly linked to external factors like inflation, charging and fuel infrastructure, supply chains, labor, critical mineral availability and pricing, and the ongoing semiconductor shortage,” John Bozzella, president and CEO of the Alliance for Automotive Innovation, said in a statement.

He added that he and the organization he leads fully back the aim to get more electric vehicles on the road. Still, there are a number of policy issues that need to be addressed before that can succeed.

“The questions policymakers should be asking: are critical mineral and battery supply chains in place? Will the critical mineral mining and processing happen in the U.S.? Can customers afford the vehicles? Do all communities have the same access to level 2 home charging as single-family homeowners?” Bozzella said.

“Resolving these questions will determine the ultimate success of the California regulations and the EV transformation.”