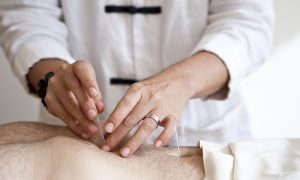 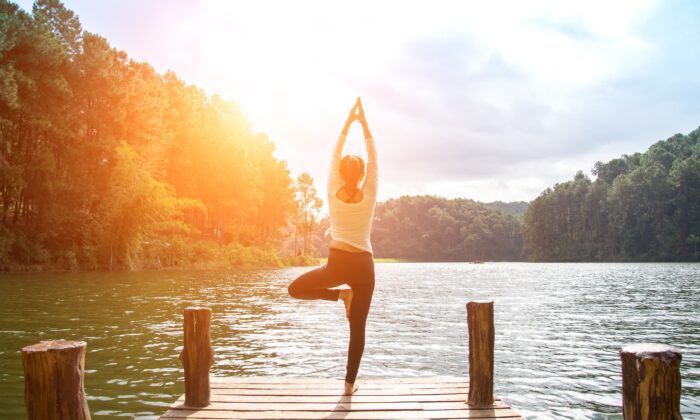 When yin and yang are in balance, life flourishes through the creative flow of natural law.(Freebird7977/Shutterstock)
Mind & Body

Yin and Yang: The Path to a Balanced Life

Stand on one foot for just a few seconds, and life can immediately become awkward or even precarious. Once you’re back in balance with both feet firmly on the ground, strength, stability, and harmony return.

This is the lesson of yin and yang.

Yin and yang are symbolized by the taiji—a circle composed of two teardrops; one black, the other white. Both sides contain a small piece of the opposing color.

This enigmatic symbol is a popular image today, but the idea goes back millennia and is fundamental to ancient Chinese science and culture. The earliest known reference of yin and yang comes from the I Ching (Book of Changes)—a mystical divination practice at least 3500 years old.

Yin and yang describe the world as an endless pair of polar opposites: cold and hot, up and down, wet, and dry. The literal translation of yin/yang is dark/light. It refers to a mountain, one side illuminated by the sun, the other cast in shadow. If the scene was either too bright or too dark the mountain would be hard to see. But a balance of light and shade gives the mountain definition, clarity, and meaning.

However, not everyone gets the gist of the dark-light dichotomy at first. According to Brandon LaGreca, a Chinese medicine practitioner and director of East Troy Acupuncture in southeast Wisconsin, the biggest misconception people have with the yin/yang relationship is that they mistakenly interpret it as a struggle of good versus evil.

“Instead of opposites in conflict, think of it more as opposing forces in complement,” LaGreca said. “We need both of them. One is not better than the other. At face value, yang is male and yin is female, but you need both of those to have a species.”

To better understand the yin/yang relationship, take a step back to the beginning of this ancient origin story. In Taoist theory, the universe starts with the void or wuji— symbolized by an empty circle. From wuji comes taiji, and from taiji emerges all things. Once you become familiar with this pair of complementary forces, you can find poetic evidence for it everywhere around you: earth and sky, night and day, winter and summer, plants and animals, the rolling waves crashing against the rocky shore.

As modern scientists find their own ways to understand the world, they have also found elements that affirm the idea of yin and yang: The positive and negative charges of atomic elements, the equal and opposite reaction of Newton’s third law of motion, the growth and decline of all organisms and systems that are sometimes described as entropy and atrophy.

When yin and yang are in balance, life flourishes through the creative flow of natural law. But when these forces fall out of balance, the life force becomes warped and stagnant. Over time, this imbalance leads to disease and destruction.

Chinese medicine is all about seeing the human body as a representative of these elemental forces and offering complementary strategies to keep them in balance. “It’s at the core of our medicine,” LaGreca said. “It informs how we think more than anything. And from that perspective, we can then proceed with proper diagnosis and treatment.”

This approach is not unlike that sought by other kinds of doctors and the body itself. Western medicine has the concept of homeostasis, the tendency of a healthy body to move toward a relatively stable balance between its many interdependent elements. We have endless physiological processes that work to create homeostases, like hormones that turn our hunger on and others that turn it off, or immune cells that fire up our immune response when they sense danger and others that turn it off when the danger passes.

Before blood tests and CT scans, ancient doctors relied on their own sensory observation to determine how the body was out of tune. The principle of yin and yang offers a convenient method to detect and address imbalances in the body. No equipment is necessary, but a sense of balance is a must.

If you go to an acupuncturist to treat your headache, it may seem counterintuitive to see him inserting needles into your feet, until you realize the technique in action.

“If someone is manifesting symptoms that are occurring in the head and neck, then maybe we need to counterbalance that by grounding them and do more acupuncture points on the lower part of the body. That’s yin and yang manifesting itself,” LaGreca said.

This same balancing act runs through every aspect of Chinese medicine. Herbs, for example, are each classified according to their specific yin and yang properties. The characteristics of various herbs are balanced in combination to create the classic Chinese formulas. Each formula is chosen to fit the complementary pattern in a patient’s symptoms.

“We generally think of yang as warming and yin as cooling,” LaGreca said. “So herbs that have a warming function in the body, like ginger or pepper, are going to bring yang to the body. They’re going to increase circulation and produce sweating. Herbs that are bitter, which means they draw down into the body and are cold, are more yin related.”

Food is similarly categorized by its yin or yang nature. Fruit, vegetables, and grains generally fall to the yin side, while meat and eggs are more yang. When the aim of food is to bring balance to the body, choosing what’s best to eat varies with each individual.

Western medicine doesn’t call foods yin or yang, but researchers now have a better understanding of how foods stir these dualities of metabolic responses. We have begun to discover that foods have complex biochemistry that interacts with our own biochemistry in wide-ranging ways. Some foods, cinnamon, for example, thin the blood while leafy greens full of vitamin K can thicken it.

The Power of Choice

Yin and yang have provided health guidance for many generations. But in the past, the world was simpler, and food choices were far more limited. Today, we’re besieged with foods that appeal far more to our senses than our sustenance.

Even with good information, our ability to seek the balance we need for a healthy life (or what some doctors would describe as homeostasis in the body) is under constant assault. Just consider the temptation of junk food that awaits you at the till of every grocery store.

Especially when life gets busy or stressful, many of the choices we make can often undermine our balance, rather than help it. You don’t have to practice Chinese medicine to recognize this dysfunctional pattern. According to Marcelle Pick, a functional medicine nurse practitioner and founder of the Women to Women Health Center in Maine, a healthy balanced life begins with the choices we make.

“For me, it’s about the dance of our inner world and understanding ourselves on the inside as well as the outer world,” Pick said.

Everything we experience can influence our balance for the better or worse. Of course, there are some things we cannot control, but there are many factors that we can. When Pick sees patients, she gets them to examine their range of choices. This means not only discussing symptoms, but talking about work life, home life, exercise, and nutrition. These details help Pick determine what imbalances could be causing a patient’s problems, and what counterbalances can be made to remedy them.

“That’s the key for me to help people get better. I had a woman this morning that had very bad diarrhea. We talked about her diet, and what foods she needs to take away. I also asked about the stress that is going on in her life,” Pick said. “I asked, ‘Are you self-reflective? Are you doing anything that’s calming?”’

Modern diagnostic tests can accurately identify specific diseases once the markers for them appear. But we typically don’t just go from well to sick overnight. Weeks, months, or years of chronic stress, bad choices, and toxic exposures can turn minor imbalances into major problems.

This is clearly the case in regard to chronic illness. But Pick points to a recent example that shows how people who lead imbalanced lives can also make themselves more susceptible to infectious disease.

“Obesity is one of the risk factors for COVID-19, because of the inflammation involved with it. And in the U.S. we have a population of 40 to 50 percent who are overweight,” she said. “For many of these people, there was a trajectory that they were already on with poor nutrition, lack of exercise, high blood pressure, and several medications.”

“As strange as it sounds, COVID is telling us that we have to have balance,” Pick said. “Because if we don’t our immune system won’t work the way we need it to, and we can have pretty significant problems.”

Those most at risk of death from a COVID-19 infection are those with a compromised immune system. Their immune system overreacts to the infection and a storm of immune cells known as cytokines overwhelms the body. The fine balance that turns their immune response on and off to create balance in the body doesn’t work, often because it has been turned on too long due to disease and poor nutrition over the course of their lives.

But even the effects of the COVID-19 pandemic come in opposites as yin and yang would predict. While the disease has upended communities in harmful ways, there are also signs of healing in other ways.

Pick notes that for all the fear and angst brought on by a worldwide pandemic and widespread lockdown, the event has also brought amazing and unexpected changes to the planet. For example, several cities once plagued by pollution have seen skies clearer than they’ve been in decades.

“For every dark side, there’s a light side as well,” she said. “What I say to my patients is, ‘What can you take from this? What don’t you want any more? And what do you want more of as you move forward?’ That’s the balance.”

For many people, months of lockdown has meant more free time than they’ve ever had available to reflect on these big ideas. But not everyone has had this luxury. For those still stretched too thin, Pick says it’s important to take a few moments for yourself no matter how busy life becomes. She says just a little bit of personal time can make a difference in your mental and physical health.

“Do what I call 777 breathing. Inhale for seven seconds, hold for seven, exhale for seven. Do it seven times,” she said. “You might take five minutes twice a day to do this, or three times a day. We have to figure out some of the pieces of this for ourselves because what works for me doesn’t work for you. We have to find out what our dance is.”

Another simple and direct way to help bring your body to balance is through movement. LaGreca says that lethargic yin people often need more vigorous movement, like swimming, or bouncing on a trampoline. Likewise, people who are too jittery might benefit from an activity with a more yin or calming effect, like gentle yoga.

The bottom line is that there is no one-size-fits-all answer when it comes to balance. Instead, it always falls upon your ability to consider what you need, and choose an appropriate match.

“If someone is overweight and hasn’t exercised in a while, maybe they need to start with some gentle walking, which for them will be yang. For someone who’s already an athlete, a gentle walk will be more yin for them,” LaGreca said. “You have to always think of it in the context of the person’s constitution. What might be yang for one person may be yin for another.”