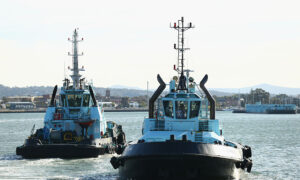 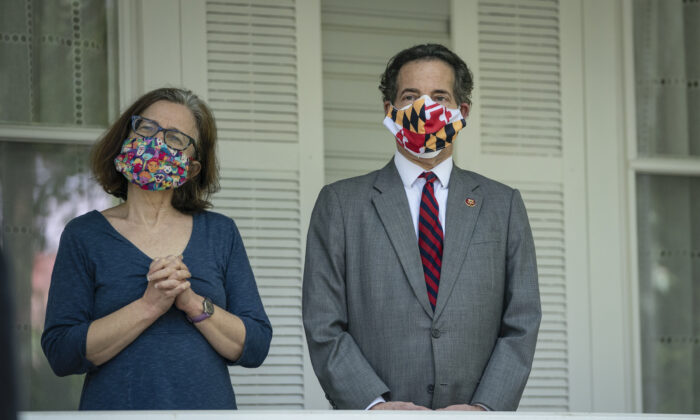 Sarah Bloom Raskin and U.S. Rep. Jamie Raskin (D-Md.) in the front yard of their home in Takoma Park, Md. on May 4, 2020. (Drew Angerer/Getty Images)
Policy

WASHINGTON—Treasury Secretary Janet Yellen is reportedly looking to appoint an Obama administration veteran as climate czar at the Treasury Department to lead efforts in assessing the effects of climate change on financial markets as well as pushing tax incentives for renewable energy.

Yellen is expected to appoint Sarah Bloom Raskin, former deputy Treasury secretary under the Obama administration, to head the newly formed Treasury climate “hub,” The Wall Street Journal reported on Feb. 12. Raskin, who is also a former member of the Federal Reserve Board, is married to Rep. Jamie Raskin (D-Md.), who was the lead House impeachment manager in the recent impeachment trial of former President Donald Trump.

During her Senate confirmation hearing on Jan. 19, Yellen pledged to “appoint someone at a very senior level” to lead the department’s climate efforts and to “create a hub” that will solely focus on addressing risks related to climate change.

Yellen made it clear that President Joe Biden’s climate agenda would be a major focus of her tenure as Treasury secretary.

“Climate change is an existential threat and one of the dominant forces shaping the world and our economy,” Yellen stated on Jan. 21, in a written response to questions from the Senate Finance Committee. “Meeting this challenge is an urgent need, and I am committed to doing whatever I can to address this impending crisis.”

Yellen added that she would support using “the tax code to set incentives for businesses and individuals to adopt climate-friendly policies.”

In addition, climate change poses a potential systemic risk to the U.S. economy, according to Yellen, who believes that “appropriate processes and regulations” should be adopted to assess and mitigate this risk.

Yellen is expected to push financial institutions to run stress tests on their exposure to climate risk, which may eventually require them to hold more capital to mitigate any effects. Stress testing emerged from the Great Recession as a way to determine whether a bank has enough capital to weather various economic risks.

Raskin is currently a visiting professor at Duke University School of Law and teaches a class called “The Impact of Climate Change on Financial Markets.”

She was a key contributor last year to a report by Ceres (pdf), an advocacy group that has outlined more than 50 recommendations for financial regulators to protect the U.S. economy from climate-related shocks. She had also called on the Fed to implement climate stress testing.

The Treasury Department didn’t immediately respond to a request by The Epoch Times for comment.

The Fed announced in December that it had joined a network of central banks that advocate for using levers of financial regulation to address climate change. The central bank also hired the New York Fed’s top bank oversight official to lead its newly created Supervision Climate Committee in Washington, according to The Wall Street Journal.

Republicans have raised concerns about the Biden administration potentially using financial regulation as a back door to achieve its policy objectives. They’re concerned that the administration and the regulators including the Fed could politicize access to capital and choke off bank financing for sectors they disapprove of, such as coal, oil, and gas.

“The assault by the Biden Administration on the energy industry is a threat to jobs and households energy costs in a time of widespread economic uncertainty,” Rep. Andy Barr (R-Ky.) told The Epoch Times in an email. “It is wrong for the Biden Administration to put a radical environmental agenda led by [his top climate advisers] John Kerry and Gina McCarthy ahead of the interests of families in Kentucky and throughout the United States.”

A group of Republican lawmakers led by Barr sent a letter on Dec. 9 to the Fed, raising concerns about the central bank potentially introducing climate-related scenarios to its stress tests for regulated banks.

The group urged the central bank “not to entertain implementation of such scenarios” without considering their shortcomings and challenges as they rely on speculation and long-term projections.

According to John Cochrane, an economist at the Hoover Institution at Stanford University, “climate change does not pose any financial risk at the one-, five-, or even ten-year horizon at which one can conceivably assess the risk to bank assets.”

U.S. companies are closely monitoring the new administration’s climate policies and their impact on earnings. According to FactSet, 28 S&P 500 companies, including large banks, mentioned Biden’s climate change and energy policy on their fourth-quarter earnings calls. Of these 28 companies, 17 expressed support for his climate policies and they discussed how they have been adjusting their operations to help reduce carbon and greenhouse gas emissions.

Jamie Dimon, chairman and CEO of JPMorgan Chase, predicted during the financial services company’s earnings call on Jan. 15 that there would be new demands from regulators under the new administration.

“Obviously, we want to satisfy all of our regulators. So I do expect that there’ll be a new set of regulators, they’ll have a new set of demands. Some we agree with. Now we want to do a better job in climate for the world. We want to be more green,” Dimon said.