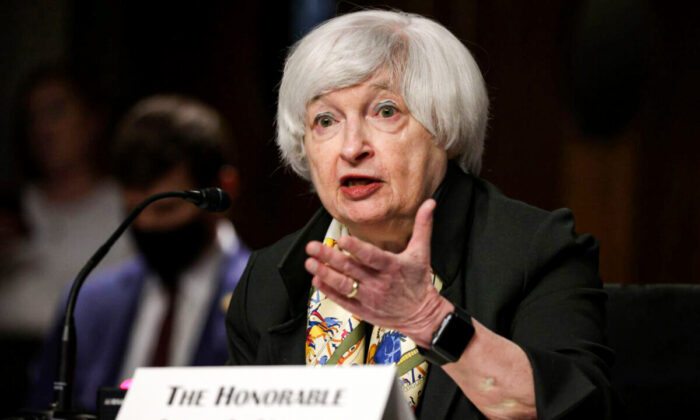 Yellen made the remarks on CNBC’s “Closing Bell” program, responding to a question whether the crisis in Ukraine had led her to revise her earlier projections for inflation to ease in the second half of 2022.

“It is exacerbating it,” she said of the Russia–Ukraine conflict. “I think there’s no doubt about it. We’ve seen a very meaningful increase in gas prices and my guess is that next month, we’ll see a further evidence of an impact on U.S. inflation of Putin’s war on Ukraine.”

The invasion of Ukraine has prompted Western nations to impose punishing sanctions on Moscow, while a flurry of major brands have cut their business ties with Russia.

Oil prices have surged in the wake of the invasion, as have prices of key minerals, fertilizer, and food products like wheat, which several days ago vaulted to a historic high of $13.63 per bushel. The price of urea, a key nitrogen fertilizer, has risen more than threefold over the past 12 months.

Inflation in the United States rose at a blistering pace of 7.9 percent in the year through February, data released Thursday by the Bureau of Labor Statistics (BLS) showed. That’s the highest pace in 40 years.

Asked whether she stood by her earlier predictions for inflation to ease in the second half of this year, Yellen declined to make a firm prediction citing “a lot of uncertainty” related to the situation in Ukraine, but she did suggest those bets are off.

“We’re likely to see another year in which 12-month inflation numbers remain very uncomfortably high,” Yellen said, adding that the Fed would be keeping a close eye on the inflation data and is poised to act to relieve upward price pressures.

“I have confidence in their ability to make a meaningful difference going forward,” Yellen said, adding that she thinks the Fed’s planned cycle of monetary tightening would result in a “soft landing” and that she doesn’t expect a recession.

Meanwhile, consumers’ one-year-ahead expectations for the rate of inflation have risen to their highest level since 1981, according to the University of Michigan’s most recent consumer sentiment survey.

Consumer confidence fell for the third month in a row, with sentiment dropping to its lowest level in nearly 11 years.

Nearly a quarter of people responding to the Michigan University survey mentioned the Ukraine invasion when answering questions about the economic outlook.

Commenting on the stark consumer confidence data was economist Peter Schiff, who predicted more downside for sentiment and more upside for inflation.

“Worse one-year #inflation expectations hit 5.4 percent, the highest since Dec. 1981. Imagine how much gloomier consumers would be if they realized inflation will actually be much higher!” he added.

“High and persistent #inflation is a key issue with multiplying—actual and potential—economic, financial, institutional, political and social spillovers,” he said in a tweet.

“This will remain the case for months to come as inflation heads higher.”