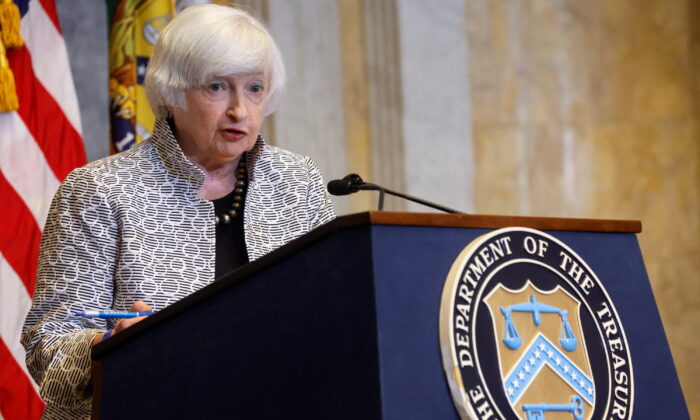 U.S. Treasury Secretary Janet Yellen claimed that President Joe Biden’s economic policies have allowed the American economy to recover from the pandemic and be on the path to becoming stronger than it was before.

“Our plan has worked,” boasted Yellen, who said that “by any traditional metric, we have experienced one of the quickest economic recoveries in modern history.”

However, the lingering effects of the pandemic, rising prices, and a drop in workforce participation, combined with the war in Ukraine, have caused the U.S. economy to slow since the beginning of the year.

Yellen spoke at a Ford Motor Company electric vehicle plant in Detroit during a tour of the Rouge Electric Vehicle Center in Dearborn, which produces the electric-powered version of the classic F-150 Lightning pickup truck.

The White House has been touting its recent success at passing key economic legislation ahead of the midterm elections in November, as the Democrats try to keep control of Congress.

Biden and Democrats are facing uncertainty in the polls this year regarding the economy, as Americans have become increasingly upset with rising prices and higher borrowing rates.

Yellen admitted that more needed to be done to tackle inflation, which she said was the Biden administration’s “top economic priority.”

The treasury secretary told her audience that the White House economic agenda “will put the United States back to full employment in record time” and that cutting domestic carbon emissions would actually be a major boon and not a burden on the economy.

She said that the United States was well on its “way to the future where we would depend on the wind, the sun, and other clean sources of energy” and that “we will rid ourselves of our current dependence on fossil fuels.”

Yellen said that the path to a green economy will be encouraged with the combination of carbon tax credits and stricter government regulations to reduce emissions to 2005 levels by 2030.

The treasury secretary praised the Inflation Reduction Act, a massive spending bill that was passed by the Democrat-controlled Congress and signed by Biden in the White House last month.

The massive spending plan will cost hundreds of billions of dollars to fund health care subsidies, to expand IRS tax enforcement, and for “green” energy projects.

Yellen also labeled the recent passage of the CHIPS Act and last year’s infrastructure bill as the other great achievements of the Biden administration.

“Taken together, the bipartisan infrastructure law, the CHIPS Act, and the Inflation Reduction Act authorized among the most significant investments our country has ever made,” said Yellen.

She said that the two bills would boost domestic job growth, improve failing infrastructure, and promote semiconductor manufacturing in the United States to avoid being dependent on countries like China.

“I believe firmly they will help us achieve stable sustainable growth, and they’ll move us toward a fairer and more resilient economy,” she continued.

Yellen, a former chair of the Federal Reserve, has been promoting the theory of “modern supply-side economics,” which has largely been followed by the Biden administration.

In contrast to traditional supply-side economics, which focuses on tax cuts and deregulation to encourage economic investment, her system encourages investments that would boost productivity across a broader spectrum of the economy that was ignored by previous policymakers, according to Yellen.

Yellen believes that a disparity in regional inequality had severely concentrated economic growth in certain parts of the country while ignoring other regions that had fallen behind by the start of the pandemic.

She said that more investments are needed in regions that were long ignored by the wider economy for decades.

“We know that a disproportionate share of economic opportunity has been concentrated in major coastal cities. Investments from the Biden economic plan have already begun shifting this dynamic,” said Yellen.

“With an economy at full employment, we are uniquely suited for a supply-side expansion that delivers sustainable growth and reduces inequality.”

She said that additional tax increases on top of a proposed 15 percent alternative minimum corporate tax would help fund the administration’s economic agenda.

She additionally called for the implementation of a new global tax system in conjunction with other nations, to eliminate any remaining corporate tax loopholes.

However, a global tax has faced strong opposition in Congress and was not included in the recent legislation.

Yellen also indicated that the Democrats will try to reverse the tax cuts signed by former President Donald Trump in 2017 if they retain their congressional majority this year.

She believes that tax rates on high-earning individuals and corporations need to return to what she considers “historical norms,” and will be enforced by the $81 billion expansion of the IRS.

All of these bills and policies have been roundly criticized by key Republicans for potentially causing harm to the suffering middle class and other hardworking Americans.

Congressional Republicans have noted that the projected increase in government spending, along with the other proposed bills, would only worsen existing high prices and expand the federal deficit.

“The Democrats’ recent policies … hurt middle-class families around the country and have caused a recession whether they want to admit it or not,” said a National Republican Senate Committee (NRSC) spokeswoman to CNBC.

“Democrats seem to be oblivious about solving inflation, continuing to hurt our economy, and need to be voted out in November.”

A Gallup poll released this week showed that 74 percent of low-income Americans had suffered financial hardship due to rising prices, up from 66 percent in January.

The Fed is expected to hike interest rates by 75 basis points later this month at the next Fed policy meeting, after raising them by 2.25 to 2.50 points since March in order to lower 40-year-high inflation.

“The most immediate challenge is to return to an environment of stable prices without sacrificing the economic gains of the past two years,” said Yellen, referring to the Fed.

Meanwhile, Biden traveled to Ohio on Sept. 9 to promote the opening of a new $100 billion Intel semiconductor manufacturing facility in Ohio.