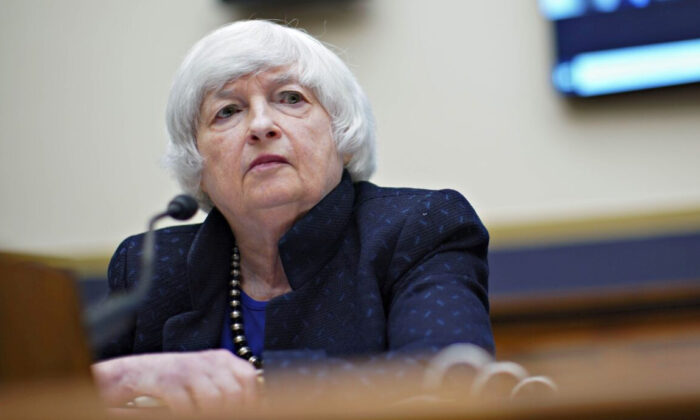 Treasury Secretary Janet Yellen waded into the “transitory” versus “persistent” inflation debate on Tuesday, insisting it’s reasonable to view the current price spike as temporary even if it doesn’t abate within the next few months.

“Supply bottlenecks have developed that have caused inflation,” Yellen said in an interview on CNBC’s “Squawk Box” on Oct. 5. “I believe that they’re transitory, but that doesn’t mean they’ll go away over the next several months.”

Yellen’s remarks come as debate swirls around the durability of the current inflationary spell. Federal Reserve officials have repeatedly characterized it as “transitory” though they have increasingly expressed concern about the risk of a de-anchoring of inflationary expectations. That’s where confidence in the “transitory” narrative falls and people start to believe and behave as if inflation will be far stickier than previously believed, impacting wage and price-setting behavior and potentially even sparking the kind of upward wage-price spiral that bedeviled the economy in the 1970s.

While it’s not clear how Fed officials define “transitory,” Federal Reserve Vice Chair Richard Clarida told Bloomberg in an interview earlier this year that if “inflation at the end of the year has not declined from where it is in the middle of the year that will be some good evidence,” that the Fed’s current outlook is wrong.

But a run of hot price data, including elevated numbers for several months running in the Fed’s preferred inflation gauge, the core PCE inflation index, have already led to a reframing of Clarida’s “transitory” framework. Federal Reserve Chairman Jerome Powell said last week that he saw bottlenecks and supply problems “not getting better—in fact at the margins apparently getting a little bit worse.”

Powell said he now expects inflationary pressures running into 2022, a position consistent with upward revisions to inflation expectations featured in the most recent economic projections from the Federal Open Market Committee (FOMC), the Fed’s policy-setting body. The committee now projects core PCE inflation at 2.3 percent in 2022, up from an earlier forecast of 2.1 percent.

“We see that continuing into next year probably, and holding up inflation longer than we had thought,” Powell said at a panel discussion hosted by the European Central Bank on Sept. 29.

Still, Powell said he doesn’t anticipate the current surge in prices to “lead to a new inflation regime, in which inflation remains high year after year.”

Queen’s College President Mohamed El-Erian told Bloomberg in an Oct. 1 interview that, in his view, the proper way to consider “transitory” versus “persistent” in the discussion on price-hike durability is that inflation ceases to be temporary once there are changes to wage and price-setting behavior.

El-Erian noted, however, that he and many of his economist colleagues are seeing a shift in those behaviors.

Williams noted, however, that there are upside risks and a “great deal of uncertainty” around the inflationary outlook.