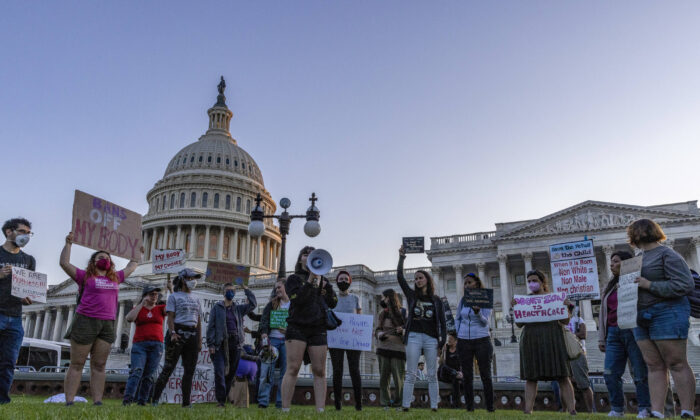 Abortion-rights demonstrators protest in front of the U.S. Supreme Court building in Washington, D.C., on May 10, 2022. (Tasos Katopodis/Getty Images)
Viewpoints

Would a Federal Law Legalizing Abortion Survive the Supreme Court?

Leading Democrats have announced that they want a federal statute overruling state laws that restrict abortion. In other words, they want Congress to legalize nearly unrestricted abortion nationwide. Obviously, such a law would intrude into an area of social policy traditionally left to the states.

Would the law pass muster in the Supreme Court?

The court’s decision in Dobbs v. Jackson Women’s Health (pdf)—which overruled Roe v. Wade (pdf)—would be no barrier to a national abortion law. This is because the Dobbs case was decided on very different grounds: The 14th Amendment says that states may not “deprive any person of … liberty … without due process of law.” Dobbs ruled that “liberty” as the Constitution uses the term doesn’t strongly protect the right to have an abortion—just as it doesn’t strongly protect the right to practice plumbing without a license or to ignore state health regulations.

Congress would rest its pro-abortion statute on at least four powers the Constitution assigns to it. These include the powers to:

What about the 10th Amendment protecting the states? Well, if a federal abortion law is truly within one of the powers listed above, then the 10th Amendment doesn’t apply, because it guards against only “powers not delegated to the United States.”

As someone who has lived with and published about the Founders and our Constitution for more than 30 years, I can tell you with a high degree of certainty that the Constitution and 14th Amendment, as understood by their ratifiers, don’t authorize a national abortion law.

The Constitution’s grant of power to Congress to “regulate Commerce … among the several States” was designed to permit Congress to govern such topics as terms of commercial trade, pricing, navigation, and marine insurance—not abortion (pdf). Indeed, even if abortion were considered “Commerce,” it wouldn’t be “Commerce among the several States,” because abortions aren’t conducted across state lines. The abortionist, the woman, and the unfortunate baby are all in the same room.

By the necessary and proper clause, the Constitution granted Congress incidental authority to regulate some noncommercial activities customarily tied to “Commerce” (pdf). A good example is product labeling, which is part of the manufacturing process. Abortion is far outside that category.

Similarly, the Constitution’s taxation clause (Article I, Section 8, Clause 1) granted Congress the power to tax but stated nothing about expenditures. Most of Congress’s spending authority came from other parts of the Constitution, including the necessary and proper clause (pdf).

As for the 14th Amendment, the amendment’s primary Senate sponsor, Sen. Jacob M. Howard (R.-Mich), specifically stated that, although women are citizens with many rights, the provisions of the equal protection clause have to be adjusted to take female biology into account. Nearly all the state lawmakers who ratified the 14th Amendment surely agreed.

In sum, a court dedicated to enforcing the Constitution as adopted would strike down a national abortion law before you could say “dilation and evacuation.”

So How Could Congress Pass an Abortion Law?

The Supreme Court (SCOTUS) no longer fully enforces the Constitution’s limits on federal power. During the mid-20th century, SCOTUS issued a series of rogue cases that changed the rules for interpreting the Constitution. In effect, the court distorted the document to fit the liberal political agenda.

Ideally, those cases should be overruled. But that hasn’t happened because—despite what the establishment media tell you—the court hasn’t had an “originalist” majority for many years.

Thus unfettered by the Constitution’s limits on their powers, presidents, congressional majorities, and bureaucrats have gone hog-wild. This has been true of both Democrats and Republicans. One illustration: In 2019, a Republican president, Donald Trump, signed a bipartisan measure demolishing centuries of state precedent and decreeing a single national age for tobacco purchases.

And that’s only one illustration. Today, the feds also mandate a national drinking age. They regulate our toilets’ water capacity, determine what light bulbs we can buy, micro-manage school sports, label bathrooms, require people to be vaccinated, impose massive restrictions on the relationship between you and your physician, and spend trillions of dollars we don’t have. In 2015, the Supreme Court itself ruled that all states must recognize same-sex civil marriage, even though 30 consecutive state popular votes had rejected the idea—recently, uniformly, and overwhelmingly. On July 20, the House of Representatives, again on a bipartisan tally, also ignored those popular votes and agreed to insert same-sex marriage into federal statutory law.

None of this conduct is constitutional. It’s, frankly, pure usurpation.

Does the Court Enforce Any ‘States’ Rights’ at All?

Most justices also agree that if an executive agency invades an area traditionally administered by the states, then it must show clear authorization from Congress for doing so. The days apparently are gone when agencies could fix the limits of their own power. But this protection would be useless as well against a clear federal statute legalizing abortion.

For the court to strike down a federal abortion law, it would have to go farther: It would have to courageously enforce the Constitution’s subject-matter boundaries between federal and state jurisdiction.

Under the leadership of Chief Justice William Rehnquist (1986 to 2005), SCOTUS did issue a few decisions protecting state jurisdiction over certain subjects. However, Congress found ways around most of those, and SCOTUS hasn’t followed up. In 2018, for example, a case (pdf) arose on Congress’s intervention into sports gambling (of all things). Although the court did void part of the law for violating the anti-commandeering doctrine, only Justice Clarence Thomas questioned why Congress thought it could regulate this subject at all.

Similarly, the court continues to avoid striking down Obamacare—even though since the 2017 repeal of the individual insurance mandate, Obamacare is unconstitutional under the court’s own standards.

In sum, most of the justices have shown no stomach for directly defending the Constitution’s most important limits on congressional power. Of course, it’s possible they might stand up against an overreach as flagrant as a national pro-abortion law.

But don’t count on it.