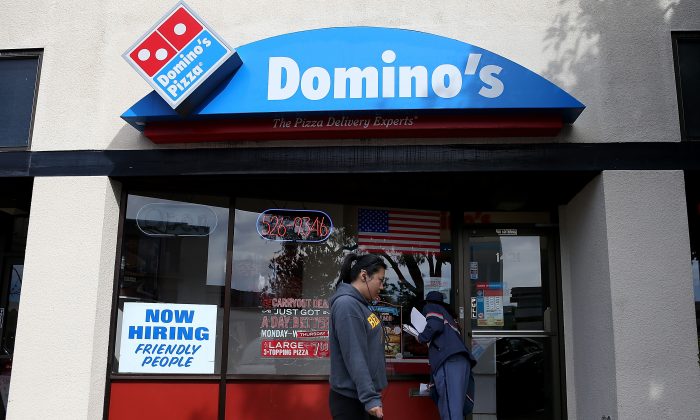 A 'Now Hiring' sign is posted in the window of a Domino's Pizza restaurant on in Albany, Calif., March 8. (Justin Sullivan/Getty Images)
Business & Economy

Workers Receive Billions in Benefits on Top of Wage

Companies profit from low wages, taxpayers foot the bill
By Heide B. Malhotra

Food stamps and other entitlement programs have become the norm for many people who work in low-wage industries.

According to a mid-October report from the University of Illinois and UC Berkeley, almost three-quarter of the people on subsistence programs, such as food stamps, have jobs.

“Many of them work in jobs that pay wages so low that their paychecks do not generate enough income to provide for life’s basic necessities,” said the report.

Employers in the fast-food industry pay either the minimum or a little above the minimum wage. The current federal minimum wage stands at $7.25, an amount that has not been raised since 2009.

Depending on the state, the minimum wage ranges between $7.25 and $9.19, with the latter being paid in Washington state.

Besides, the vast majority (87 percent) of people earning minimum wage don’t have health care, which also increases the cost to the taxpayer.

The fast-food industry pays mostly minimum wage and more than half of fast-food workers receive support from at least one, if not more, government subsidized programs.

“The fast food industry is marked by two extremes,” stated an October report by the National Employment Law Project (NELP).

The major fast-food companies make billions in profits, give significant benefit packages to their executives, pay large dividends to their stockholders and buy back their outstanding shares.

However, they pay only minimum wage to most of their employees and keep them on a part-time schedule so they don’t have to provide health and other benefits.

Payroll data for fast-food workers is not readily available, but the NELP report estimated the federal government hands out approximately $3.8 billion dollars annually through subsistence programs to these workers.

Estimates from the 10 major fast-food companies in the United States were disclosed by NELP, including information indicating that companies could easily increase the pay of their front-line workers, by reducing some of the executive and shareholder benefits.

For example, McDonald’s costs the U.S. taxpayer approximately $1.2 billion per year, while in 2012 its profit amounted to $5.5 billion. The company’s CEO was paid $13.7 million.

The 10 companies in NELP’s report, which include Burger King, Dunkin Donuts, and Domino’s, made a combined $7.44 billion in profit and paid their executives a total of $52.7 million.

Many companies in the fast-food or retail sector, believe the best way to increase their profit margin is to pay their workers a smaller salary.

But there are other examples. The privately held grocery store Trader Joe’s, QuikTrip (QT) convenience stores, and Costco Wholesale Corp., which also rely on large part-time workforces, have a different approach.

They pay their employees a decent salary because they realized that this resulted in higher productivity and more sales, according to a 2013 article on the Atlantic website.

Depressing wages for employees is a common theme in many industries. The call for containing costs starts with reducing labor costs. In the long run, however, the effect is often lower productivity, less revenue, and long-term stagnation.