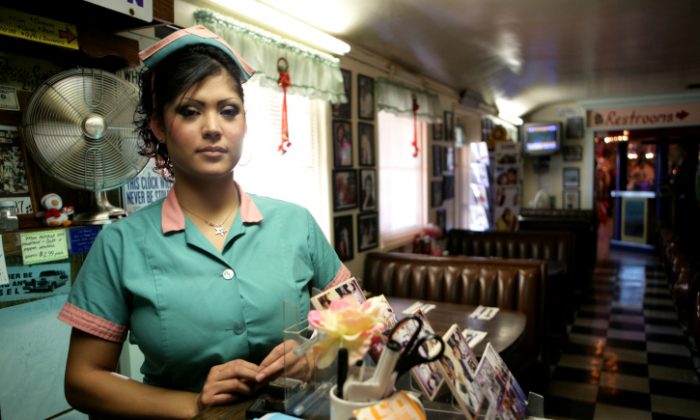 The federal minimum wage for tipped workers is still $2.13 an hour
By Gary Feuerberg

WASHINGTON—Five years ago, the federal minimum wage was raised to $7.25. On the anniversary of this raise, July 24, Congressman George Miller (D-Calif.), Senator Tom Harkin (D-Iowa), and Senator Al Franken (D-Minn.) held a news conference to say that the minimum wage has not kept pace with inflation, and should be increased to $10.10 an hour and indexed to inflation.

Miller said, “Over the past five years, minimum-wage earners have been working harder than ever, only to see their pay continually cut. This is wrong and an affront to the promise of the American Dream,” according to the Democratic Party’s House Education and Workforce Committee website.

The news conference also mentioned “tipped workers,” and the need to raise their minimum wage and link it to inflation. The public may not be aware that the minimum wage doesn’t apply in a straightforward way to those who work for gratuities—the tipped workers.

The American people and even people who should know, such as some congressional staffers, seem unaware of our two-tier wage system.

In a sub-section of the 1966 amendment to the Fair Labor Standards Act (FLSA), a subminimum wage applies to persons who work for gratuities, such as waiters and bartenders, who make up the bulk of the tipped workers. These workers had been excluded in the 1938 law. A sub-wage was established for tipped workers with the assumption that worker tips would make up any shortfall between the subminimum wage and the regular minimum wage.

Tips have become a “subsidy” from consumers to the employers of tipped workers, said Sylvia A. Allegretto and David Cooper, in a recently released research report, “Twenty-Three Years and Still Waiting for Change.” As written into law, the subsidy is referred to as a “tip credit.”

The authors were guests at a forum, July 24, at the Economic Policy Institute (EPI), where they argued that that lawmakers should eliminate the tipped minimum wage and require that tipped workers be paid the full minimum wage.

In February, President Obama issued an executive order that makes it government policy to require government contractors to pay the minimum wage. There is a provision included that raises the tipped minimum wage in federal contracts to 70 percent of the federal minimum wage, phased in over time, according to Laura A. Fortman, deputy administrator, Wage and Hour Division, U.S. Department of Labor, who spoke at the forum.

The president said in the 2014 State of Union address, “No one who works full-time should have to live in poverty.” He asked that the federal minimum wage be raised to $9 an hour.

Approximately 4.3 million Americans are tipped workers, and 2.5 million are waiters and bartenders. Two-thirds are women. While tipped workers are younger than the overall workforce, only 12.6 percent are teenagers. The majority are at least 25, and one in four is over 40, according to the report, which was based on data from the Current Population Survey, 2010-2012.

Their poverty rate is 12.8 percent compared to non-tipped workers’ poverty rate of 6.5 percent nationwide, said Cooper, who is an economic analyst with EPI.

Cooper said that there may be some high performers in “fine-dining restaurants and high-end casinos,” but “the vast majority of [tipped] workers are not doing that well.” Nationwide, the median wage (including tips) for tipped workers is $10.22 compared to $16.48 for all workers.

“The tip credit is now 79 percent; so customers pay the lion’s share of the wage bill for the employer,” she said.

The Fair Minimum Wage Act of 2014, proposed by Sen. Harkin and Rep. Miller, would increase the minimum wage to $10.10 an hour by three 95-cent increments, and the bill would restore the historical connection between the minimum and subminimum tipped wage. The latter would become 70 percent of the regular minimum wage.

In the District of Columbia, the minimum tipped wage is $2.77. That wage is quite different from the regular minimum wage of $9.50.

When few customers or low tips bring down a tipped worker’s hourly wage below $7.25 an hour, the employer is supposed to make up the difference, but in practice, it doesn’t always work out. Some workers are also unaware of the requirement. The report suggests that “tipped workers are subject to high rates of wage theft,” but did not to provide any sources for the evidence.

Seven states—Washington, Oregon, Nevada, California, Minnesota, Montana, and Alaska—have no tipped minimum wage. Tipped workers are paid the same minimum wage that non-tipped workers receive. A tip in these states is a genuine gratuity and not a wage subsidy for the employer.

Not only do these seven states not have subminimum wages, but for most of these states, the minimum wage is even higher than the federal minimum wage, observed Allegretto. California is now at $9 an hour and Washington state is at $9.32—”a big difference from $2.13,” said Allegretto.

In 19 states where the minimum tipped wage is $2.13, customers provide a wage subsidy to employers of $5.12 an hour. These states, concentrated mainly in the South, take full advantage of the maximum allowable tip credit.

The restaurant industry has made great use of minimum-wage and tipped-wage workers. More than 60 percent of tipped workers are employed in food service, according to the report. Over the last two decades, the industry has lobbied hard to keep the federal $2.13 minimum, claiming that raising it would bring harm to the industry and its workers. Yet, restaurants seem to be thriving in California where there is no tipped minimum wage, said Allegretto. Another study (2013) by Allegretto referenced in the paper found that increases in the tipped minimum wage over the last several decades has “had little to no effect on employment.”