Woman Who Splashed Ink on Xi Jinping’s Image Released, but Is Now a Totally Different Person 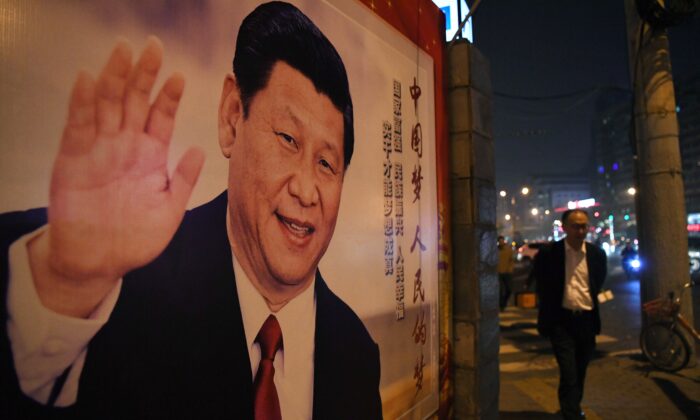 A man walks past a roadside poster of Chinese leader Xi Jinping after the closing of the 19th Communist Party Congress in Beijing on Oct. 24, 2017. (GREG BAKER/AFP via Getty Images)
By Olivia Li

The young woman who splashed ink on a poster with a photo of Chinese leader Xi Jinping in mid-2018 was recently released after she was subjected to “compulsory treatment” in a psychiatric hospital for more than a year. Her father suspects that she was a victim of psychiatric abuse and is worried that her health has deteriorated because she now appears to be a totally different person.

Standing in front of the poster at Shanghai’s HNA Plaza in the early morning hours, Dong declared, “I am here using my real name to oppose Xi Jinping’s authoritarian dictatorship, and to protest against the mind control abuses the Chinese Communist Party perpetrated on me.”

She then turned toward the poster and splashed ink on Xi’s image, while continuing her statement: “I detest him to the bone. See, I am now taking action, and I am doing it all on my own, opposing the Chinese Communist Party, its dictatorship, its tyranny.”

She challenged Xi to “come and catch” her, saying, “I want to see how he is going to deal with me.”

Dong also called for international organizations to get involved in investigating mind control abuses she had suffered. “I am willing to collaborate with them to provide evidence,” she said.

Dong was taken away by Shanghai police that same afternoon and went missing for several days.

Shortly after Dong’s disappearance, Voice of America revealed in an exclusive report on July 22, 2018, that she was taken to her hometown in Zhuzhou City in Hunan Province, where she received psychiatric treatment at Hunan’s Zhuzhou No. 3 Hospital, a psychiatric institution.

Dong was released on Nov. 19, 2019, and is now living with her mother in Hunan’s Taoshui township. Her parents divorced shortly after her act of vandalism.

After her father, Dong Jianbiao, went to visit her on Jan. 2 this year, he was very concerned about her mental health and revealed some details to a human rights attorney, named Ou Biaofeng, who has been a strong supporter of Dong’s family, Radio Free Asia (RFA) reported.

“Her demeanor is very different from before. She basically remains silent all the time, to the extent that I feel she shows signs of dementia,” Dong Jianbiao told the attorney, adding that his daughter used to be a lively young woman.

“When I asked her what had happened to her in the hospital, she just kept her mouth shut. Her only response was ‘Umm, umm’ to those questions,” he said.

He told the attorney that he believes the change in his daughter’s behavior is likely the result of her being force-fed medication while being held in the psychiatric hospital. He also shared a photo of his daughter and pointed out that her face had become swollen, and she has gained a lot of weight, RFA reported.

According to the RFA report, attorney Ou Biaofeng said that the authorities subjected Dong Yaoqiong to forced “psychiatric treatment” in order to silence her after her Twitter video garnered widespread support. She was dubbed as the “Ink Girl” on Chinese social media.

“It seems that there are various medications that she is still taking, which would account for [the changes in Dong Yaoqiong],” Ou told RFA. “The authorities must be using this to intimidate her, so that she no longer speaks out in public.”

“The illegal detention [of Dong Yaoqiong] in a psychiatric hospital comes from their fears of anyone who protests, and it’s meant to create a climate of fear,” he said.

According to statistics from China’s medical community, more than 200 million Chinese citizens, or 17.5 percent of the adult population, suffer from mental disorders, a much higher ratio than in any other country.

Using the United States as a reference, only 5 percent of U.S. adults, 18 or older, experience a mental illness in any one year.

In addition, of the more than 200 million Chinese citizens suffering from mental disorders, over 16 million were diagnosed as being serious cases that require treatment, amounting to more than one percent of China’s adult population.

Wang Shuying, a Chinese petitioner, told New Tang Dynasty TV, a sister publication of The Epoch Times, that Chinese authorities actually detain many sane people in psychiatric hospitals as a means of suppression and persecution, and this is the reason why China has such an unusually high statistics of mental patients.

Among the mentally healthy people who may get sent to psychiatric hospitals are dissidents, petitioners, members of religious groups and ethnic minorities—basically anyone who the Chinese regime deems as a threat to their authority.

Chinese petitioners are simply citizens who seek redress from authorities according to Chinese law after becoming victims of some injustice. However, instead of investigating and remedying such cases, Chinese authorities often treat petitioners as “factors causing social instability,” and use various ways to quell and silence them.

Wang said she was subjected to forced medication, both pill form and injectable, at a psychiatric hospital and described it as being unbearable.

“It was so painful that many times I wanted to ram my head into the wall to commit suicide,” she said.

Practitioners of Falun Gong, a meditation and exercise practice that has been persecuted in China for over 20 years, are also being detained in psychiatric hospitals in large numbers in order to force them to give up the practice. According to Minghui.org, many practitioners have become disabled or were driven to insanity as a result of the psychiatric torture and abuse they were subjected to.