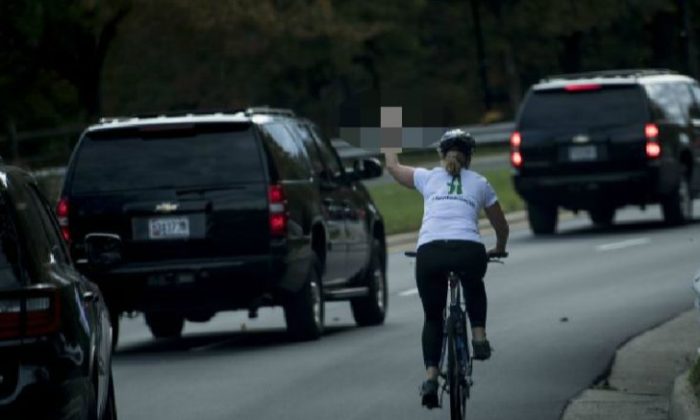 A woman on a bike gestures with her middle finger as a motorcade with US President Donald Trump departs Trump National Golf Course in Sterling, Virginia on Oct. 28, 2017. (BRENDAN SMIALOWSKI/AFP/Getty Images)
US News

The woman who flipped off President Donald Trump’s motorcade last week—seen in a photo that went viral online—has been fired from her job.

According to left-leaning HuffPost, Julie Briskman made the obscene gesture twice at the president’s motorcade as she was cycling. Trump was heading back from the Trump National Golf Club in Sterling, Va., on Sunday.

“POTUS’s motorcade departed the Trump National Golf Club at 3.12pm, passing two pedestrians, one of whom gave a thumbs-down sign. Then it overtook a female cyclist, wearing a white top and cycling helmet, who responded by giving the middle finger,” according to a pool reporter on the scene.

“The motorcade had to slow and the cyclist caught up, still offering the finger, before turning off in a different direction. Motorcade is now gathering speed and heading for DC,” the reporter said.

Briskman worked for Akima LLC, a Virginia-based company that holds several government contracts. She worked in marketing and communications.

Her bosses said Tuesday that she was fired.

“They said, ‘We’re separating from you,’” Briskman told HuffPost. “Basically, you cannot have ‘lewd’ or ‘obscene’ things in your social media. So they were calling flipping him off ‘obscene,’” she said.

She said that because Akima is a government contractor, the photo could hurt their business.

Briskman says she is a Democrat.