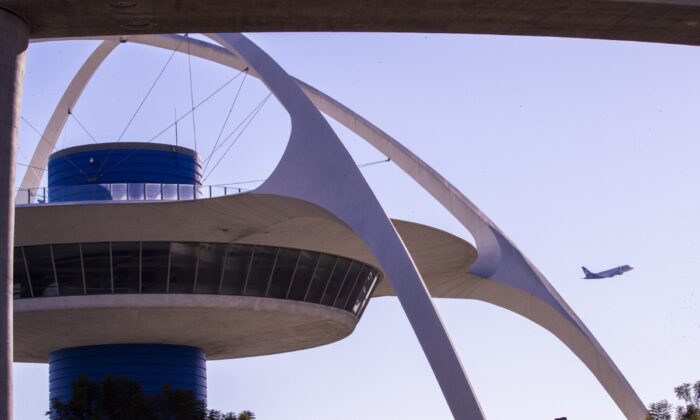 An airplane lifts off as viewed with the Theme Building in the foreground of Los Angeles International Airport, in Los Angeles, on Nov. 23, 2021. (Allen J. Schaben/Los Angeles Times/TNS)
Crime and Incidents

Woman Was Jailed 13 Days on Warrant for Woman With Same Name, Lawsuit Alleges

LOS ANGELES—A woman who alleges she was wrongfully arrested and jailed for 13 days last year on a warrant out of Texas for a woman who shares her name issuing police and the city of Los Angeles.

According to a federal lawsuit filed Tuesday, Bethany K. Farber was waiting for a flight to Puerto Escondido, Mexico, on April 16 at Los Angeles International Airport when Transportation Security Administration agents detained her. The agents said that she had an arrest warrant for identity theft out of Texas and that she couldn’t board her flight.

Farber told the agents she didn’t have a criminal record and had never been to Texas, but the agents continued to hold her in a room without food or water for more than two hours until airport police arrested her, according to the suit.

Officers took her to Century Regional Detention Facility in Lynwood, where Los Angeles police officers booked her, the lawsuit alleges.

According to the suit, she was held 13 days.

“This was an experience that no one should go through, especially a law-abiding citizen,” Farber said in a statement. “You know this is why we have our [constitutional] amendments in place to protect us. We shouldn’t be fearing law enforcement.”

Authorities never asked Farber for her driver’s license, date of birth, Social Security number or other identifying information, according to the suit, and “failed to do the bare minimum” to confirm her identity.

Farber “and this other woman had nothing in common besides their name,” the lawsuit states. She “is a young woman with long, blonde hair, while the other woman is older with short brown hair.”

If authorities had compared pictures of Farber and the woman with the Texas arrest warrant, they would have realized she should never have been arrested, the suit alleges.

Farber’s grandmother suffered a stress-induced stroke after finding out Farber had been jailed, according to the lawsuit, and died shortly after Farber was released from custody.

Before Farber’s arrest, her grandmother was “a healthy and lively ninety year old woman,” according to the suit. The two were very close, and Farber suffered “extreme emotional distress, anxiety, and mental anguish when she found out her grandmother had a stroke.”

While she was jailed, the lawsuit alleges, Farber was stripped of her privacy, forced to share toilet paper and soap, had to use hot food to warm herself, and saw human feces thrown and smeared on walls.

She suffered severe stress, anxiety, emotional injury and mental anguish due to her arrest and incarceration, the lawsuit stated.

Farber believes that authorities were told by courts in Texas that they’d arrested the wrong person, but they continued to hold her in custody for three more days, according to the suit.

The LAPD, the city of Los Angeles, Los Angeles Airport Police and 100 unnamed individuals are listed as defendants.