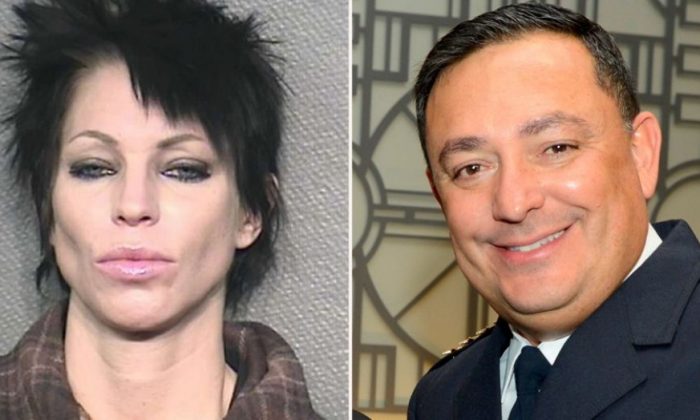 Danielle Paris, seen in a mugshot for a different offense, was arrested after she allegedly spit in the face of Houston Police Chief Art Acevedo. (Houston Police Department)
Crime and Incidents

Woman Charged for Spitting in Houston Police Chief’s Face, He Speaks Out

A woman from Houston was arrested after she spat in the face of Houston’s police chief during an arrest at a Walgreen’s store last Saturday.

Danielle Paris, 40, appeared in Court on Monday, Dec. 18, and was charged with harassment of a public servant—a felony—according to NBC affiliate KPRC.

Paris was stealing from a Walgreens located on Washington Avenue when Houston Police Department Chief Art Acevedo noticed her. He was off-duty at the time.

At the time, Acevedo was buying something for a family member when he saw Paris leaving with unpaid items, cursing and harassing customers inside the store.

“Unfortunately, we’re never really quite off duty. I called 911 on my cellphone,” Acevedo told KPRC. But as Paris was about to leave, “I had to take police action,” Acevedo continued.

According to the Houston Chronicle, Acevedo first called for help, then identified himself as an officer before going in for the arrest.

Authorities say Paris was intoxicated and resisted arrest, allegedly kicking the chief and spitting directly into his face.

Just last month, Paris was arrested for spitting at another officer, who was unnamed. However, her charge was later reduced to only a misdemeanor.

At the time, she was given 60 days in jail but her time was later reduced to 16 days.

The police chief told KPRC that her previous arrest was too lenient.

“My concern is the person that was arrested and charged with a third degree felony to another officer that was plea bargained down to a misdemeanor and at some point, we shouldn’t wait until somebody ends up getting hepatitis or some other kind of communicable disease from someone who makes a habit of spitting in first responders faces,” Acevedo told KPRC.

Under Texas State Law, spitting comes under “Harassment of a public servant.” It is punishable as a felony of the third degree, with a maximum possible fine of up to $10,000 and a maximum prison time of up to 10 years.

Poll Time: Have Your Say

The chief said the incident leads to a bigger issue on the effectiveness of the city’s judicial system “which is part of the conversation we’re having in this city about way too many people not being held accountable. How many times people get to spit in the face of a police officer before they’re being held on what the law requires,” he told KPRC.

According to Fox News, Paris is currently being held at the Harris County Jail on $3000 bail. She was due in court again on Tuesday, Dec. 19.