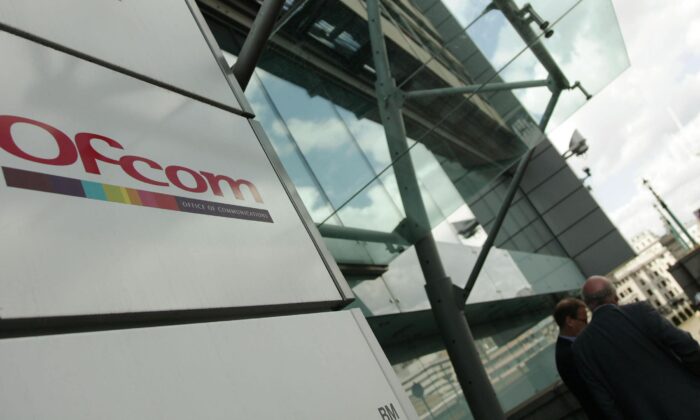 Defenders of free speech in the UK expressed concern about new powers the Online Safety Bill would provide to Ofcom the UK’s regulator of communications services.

The Bill was given an unopposed second reading by British MPs on April 19. It would force Google, Twitter, Meta (formerly Facebook), and others, to abide by a code of conduct, overseen by Ofcom, and remove “legal, but harmful” content. It is currently in committee.

“Basically Ofcom is being given a very, very free hand indeed,” said Professor Andrew Tettenborn, common-law and continental jurisdictions scholar and advisor to the Free Speech Union, to The Epoch Times. The Free Speech Union (FSU) is an organisation that was set up by the British journalist Toby Young in 2020.

The upcoming Bill (pdf) on regulating online spaces is intended to “protect children from harmful content such as pornography and limit people’s exposure to illegal content, while protecting freedom of speech.”

To help it do so, the government announced that it was granting Ofcom new responsibilities and powers, with a wide range of compliance tools, fines, and sanctions, to become the regulator for online harm. It already has experience in tackling this through its role in overseeing telecommunications and broadcasting (TV, radio programs, and video on demand).

Ofcom already has the power to revoke and fine, as it has done so for Chinese state broadcaster CGTN’s broadcast license and more recently the Kremin-backed Russia Today this year.

The Bill was introduced to parliament on March 17, sponsored by Ms. Nadine Dorries the secretary of state for Digital, Culture, Media, and Sport.

The government published a draft of the Bill in May 2021, and in a statement said it aims to protect people from “harmful content” as well as to “uphold democratic debate online.”

Under the Bill, the biggest social media platforms must carry out risk assessments on the types of harms that could appear on their services and how they plan to address them, setting out how they will do this in their terms of service.  When and if the Bill comes into force, Ofcom will have the power to fine companies failing to comply with the laws up to 10 percent of their annual global turnover.

Though the proposed legalisation has come under fire from free speech organisations who say that it will significantly curtail freedom of expression in a way that has profound consequences. Last week, the campaign group Index on Censorship said that it could lead to internet users’ freedom of expression being violated.

“If this legislative regime comes into force, there will be very many more restrictions on Internet use,” wrote Index on Censorship’s top lawyer Gavin Millar QC.

Tettenborn has previously criticised some of the powers of Ofcom. In 2020, he said that “Ofcom now has very extensive—some might say dictatorial—power to monitor content and regulate the way broadcasters are run, including for example their employment practices.”

Tettenborn said there are a lot of “fairly worrying” features in the upcoming Bill and in regards to the scope of Ofcom’s new role.

“There is a proposal for super complaints by so-called concerned bodies in Section 140 in the Bill,” he said.

“What it means is that they get in a sense privileged access to Ofcom if they want to complain about what appears on a particular site,” he said, adding that this leaves the regulator open to pressure groups who can then lobby and get active with complaints.

Tettenborn also criticised the “legal but harmful” duty that social media platforms will be required to tackle and said that any breach of these duties is liable to be met with a large fine from Ofcom.

Such content includes “anything that might infringe section 5 of the Public Order Act, anything abusive which may cause people distress,” he said.

“Now that’s very much a subjective idea,” said Tettenborn. He added that if someone theoretically were to criticise Islam, a Muslim pressure group could complain that this caused distress to a number of its members. The site where it was published would then remove the piece to avoid any headaches and/or fine.

“You might find very, very restrictive rules coming in on the basis of what is harmful,” he said.

Another member of the Free Speech Union, Dr. Frederick Attenborough wrote (pdf) a report on the Online Safety Bill and said that “Ofcom’s door always seems to be open to Full Fact, an organisation funded by digital media companies and online service providers.”

Full Fact says it is a “team of independent fact checkers” that has worked closely with Ofcom, and is a member Ofcom’s Making Sense of Media Advisory Panel (alongside Google, Facebook, and the BBC) and a member organisation of the Counter-Disinformation Policy Forum (pdf), which is convened by the Department for Digital, Culture, Media & Sport.

“They do a fairly good job, I am all for Full Fact, but what I object to is the idea of Full Fact, directly or indirectly, being able to dictate to me what I can see or read online,” said Tettenborn.

The watchdog and the government also work with a for-profit company called NewsGuard Technologies, which audits online publishers for accuracy. Anna-Sophie Harling, former managing director for Europe at NewsGuard Technologies is now Ofcom’s online safety principal and is on its content board, who is in charge of tackling disinformation and taking on technology giants such as Facebook and Alphabet.

In 2020 Ofcom’s content group director Kevin Bakhurst addressed freedom of speech in future regulation of content online saying that he believed those “concerns are unfounded” but he understood the basis for them, adding that “we never censor content.”

“Open expression is the lifeblood of the internet. Free speech is the beating heart of our democracy, values, and modern society,” said Bakhurst adding that Ofcom “would act sensibly and proportionately, focusing on the most serious and widespread harm, especially to children—not hounding small businesses or seeking to curtail the editorial freedom of news sites.”

Ofcom cannot comment on the Bill before it is implemented. A spokesperson told The Epoch Times there was no conflict of interest in having Full Fact on its advisory panel.

“One of our existing duties, given to us by Parliament, is to promote media literacy. Our advisory panel brings together a diverse range of experts to support and inform our work in this area, but doesn’t make any policy decisions. It includes representatives from across industry, academia, and charities providing a range of viewpoints,” he said.

Last year, Victoria Hewson, Head of Regulatory Affairs and Research Associate at the free-market think tank Institute of Economic Affairs explored the subject and the risks of unintended consequences of the Bill in a report called “More Harm Than Good.”

Hewson told The Epoch Times that if you ever see a politician talking about how the online world is “a wild west” then you know that person “doesn’t know what they are talking about.”

“The online world is not a wild west. The law of the land applies equally online as it does offline, if not more so,” she said.

Hewson added that as “you can imagine if there is going to be any conflict or doubt, the platforms are going to protect themselves primarily from being liable fined or even having their sites blocked and their business completely disrupted which Ofcom will have the power to do. They are obviously going to err on the side of caution.”

She added that it was “a very dark time in our history” when Ofcom was censoring people for talking about particular aspects of lockdown policy for example.

“You had vaccination and lockdown skepticism and essentially Ofcom came down on them like a tonne of bricks saying it’s your job to support the WHO and the government view, despite the fact that lockdown skepticism seems to be, at least, partly justified,” he said.

“We advised broadcasters to take care when airing unverified claims about the virus—including statements that sought to undermine the advice of public health bodies or trust in accurate sources of information,” it wrote.

Chris Summers and Lily Zhou contributed to this report.