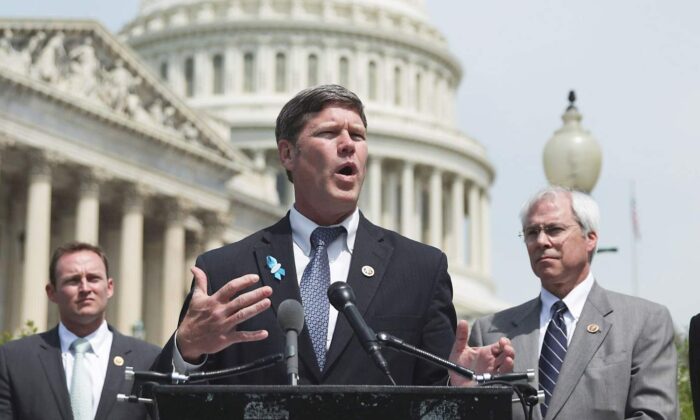 Rep. Ron Kind (D-Wis.) (C) speaks during a news conference with a bipartisan group of House members outside the U.S. Capitol in Washington on May 20, 2014. (Chip Somodevilla/Getty Images)
2022 Midterm Elections

Wisconsin Congressional Seat Called Most Likely to Flip to GOP

With hopes of filling a seat that opened with longtime Democratic U.S. Rep. Ron Kind’s retirement, four Democrats are vying for the nomination in Wisconsin’s 3rd Congressional District.

Derrick Van Orden, who is endorsed by former President Donald Trump and narrowly lost to Kind in 2020, is running unopposed in the Republican primary.

The district is now friendlier to Republicans, and it is the No. 1 congressional district likely to flip, according to the National Journal.

Kind was first elected in 1997 and announced in 2021 that he would not seek another term.

“The truth is I’ve run out of gas,” Kind said during a news conference after announcing his retirement.

Politics, he added, should not be “a constant combat sport” with the goal of destroying the other side.

Pfaff, FiveThirtyEight reports, could be considered the favorite, though there has not been a poll conducted in the race.

Cooke is an Evers appointee to the Wisconsin Economic Development Commission. She has emphasized her childhood growing up on a farm.

“I say, ‘Hi, I’m Rebecca Cooke. I grew up on a dairy farm up in Eau Claire, and these are my values and these are the things I believe and why I’m running to represent you,” Cooke told reporters at a campaign stop.

McGrath is the daughter of Al Baldus, who from 1975 to 1981 served as the 3rd District’s last Democratic Congress member before Kind. She has served in the U.S. Army, and at the State Department and CIA.

Neumann is a former pediatrician who was defeated by Kind in the 2020 Democratic primary. He bills himself as the progressive candidate among the four.

The Democratic primary winner will face a difficult challenge in facing Van Orden.

A retired Navy SEAL, Van Orden has raised more than $4.5 million and is endorsed by Trump and House Minority Leader Kevin McCarthy.

Van Orden has focused his campaign on skyrocketing inflation and instead of mentioning his potential 3rd District Democratic opponents, he often talks about President Joe Biden and House Speaker Nancy Pelosi.

The Cook Political Report, Sabato’s Crystal Ball, and Inside Elections all rate the 3rd district general election as “lean Republican.”