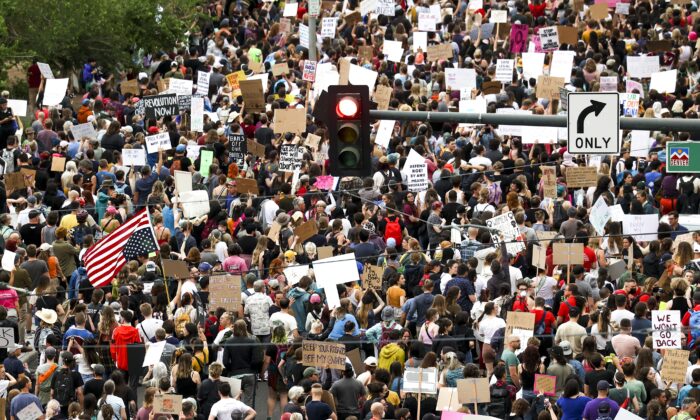 People march through the streets as they protest the Supreme Court’s decision to overturn Roe v. Wade, in Denver, on June 24, 2022. (Michael Ciaglo/Getty Images)
Viewpoints

Why Overturning Roe v. Wade Causes So Much Rage

To understand the rage over the Supreme Court’s long-overdue abandonment of Roe v. Wade (pdf), you have to think how political operatives do. It’s not how the rest of us think.

To the rest of us, whatever our position on legalized abortion, the anger at the court’s decision in Dobbs v. Jackson Women’s Health (pdf) seems irrational and out of proportion. Although we all are disappointed when a court decision doesn’t go our way, the left’s response to overruling Roe goes well beyond mere disappointment.

Most people will put the Dobbs case in perspective: The justices didn’t seize power; they gave it up. They restored abortion policy to the democratic process. The decision they overturned was not a landmark in great judicial reasoning; it was, as pro-choice commentator Michael Kinsley says, a “muddle.” The Dobbs opinion didn’t upend a national consensus, as would be the case if the court declared Social Security unconstitutional. Rather, Dobbs withdrew the court from a highly contentious issue that was poisoning judicial nomination hearings—and, indeed, our entire national discourse.

Why would any pro-choice person experience more than mere disappointment? And why would anyone take to the streets when doing so can’t force the court to recant?

The answer to these questions lies in how political operatives—those provoking and manipulating the current protests—think about issues.

How a Political Operative Thinks

To most of us who follow politics, political issues represent important public concerns. We favor lower or higher taxes because we believe they’re better public policy, or at least better for people like ourselves. When we consider environmental regulation, we seek a responsible balance that’s good for all.

But to the pure political operative, an issue is just a weapon. It’s merely a tool you use to clobber the other guy. Among other purposes, a political operative uses issues to (1) raise enthusiasm and voter turnout in his own base, (2) discourage and depress turnout in the opposition’s base, (3) entice swing voters toward his candidate or cause, (4) frighten swing voters away from the other guy’s candidate or cause, (5) divide the opposition, (6) unify everyone on his side, and (7) distract attention from damaging information.

Suppose Mr. X and Ms. Y are opposing candidates in a campaign for U.S. Senate. Evidence comes to light suggesting that Mr. X has serious character flaws. His political operatives must decide how to respond, and part of that response will be issue-manipulation. They might release an old newspaper column tending to show that Ms. Y has character flaws also. If she has a strong pro-choice base, they might point out that she once favored restrictions on abortion so as to demoralize that base. Mr. X’s team might accuse her of wanting to raise taxes and offer their own tax cut plan to distract people from the character issue and entice undecided voters.

At this point, some readers might say, “Exactly like Saul Alinsky!” True, but this pattern goes way beyond Alinsky. He applied this approach to community organizing, but other operatives have been using it for wider political purposes at least since the days of ancient Greece. It’s the demagogue’s classic playbook.

Of course, many politicians and operatives don’t realize they’re demagogues. To them, issue manipulation—without regard to the merits—is just part of doing business. Here’s a personal example:

As a successful grassroots activist in Montana during the 1990s, I became known for my direct and truthful way of speaking. I was doing what comes naturally. So I was stunned when a Republican legislative leader asked me privately, “Rob—how do you work this ‘honesty’ thing?”

The lawmaker had few convictions himself, so he assumed that my image and issues were mere gimmicks. After all, that’s how he and other legislative leaders used images and issues.

Fortunately, our American Founders understood demagogues. They understood the damage demagogues can do. So they adopted a Constitution that checked them by limiting the issues they can manipulate. The Founders removed some issues, such as certain personal rights, from their hands entirely. They gave only the federal government power to issue paper money (pdf), so state demagogues couldn’t appeal to debtors by promoting inflation. The Founders assigned issues such as family and health law to the states alone, thereby sheltering those issues from federal demagogues.

As a result, during most of our subsequent history, federal politicians were limited to manipulating relatively few issues, such as foreign policy and tariffs, slavery, and the hatreds that arose out of the Civil War. But the Constitution’s division of powers blocked them from manipulating most political issues.

However, as I detailed in my Epoch Times series “How the Supreme Court Rewrote the Constitution,” during the late 1930s and 1940s, the justices stopped enforcing most of the Constitution’s limits on federal power. One unforeseen consequence was to give national political operatives more weapons to wield.

In 1973, the Supreme Court went even further and issued Roe v. Wade, federalizing abortion policy. Abortion became a club each national party used to hammer the other. Republican operatives employed it to frighten evangelicals, Catholics, orthodox Jews, and other pro-life constituencies into voting Republican. Democrat operatives used it the same way they use racial animosities—that is, to solidify portions of their base.

Eventually, the abortion issue became more important to Democrats than to Republicans, because it fits well within the “carefree sex” paradigm they use to lure naive unmarried people.

The national media became pro-abortion for the same reason they favor liberals over conservatives: The more issues resolved nationally, the greater the importance of those media focused on national issues.

Why Roe’s Reversal Is a Disaster for the Left

The Supreme Court’s shift of abortion policy back to the states may discomfort some Republican political operatives. For Democrats and the left, though, it’s a disaster. Average Americans have far more access to state governments than to the federal government. State governments are relatively less accessible to the national elite and national special interests served by Democrat politicians and operatives.

For this reason, permanent de-federalization of abortion policy would spell big trouble for Democrats. Hence, their political operatives and allies will desperately try to keep the issue federalized. Widespread demonstrations, duly covered by the national media, are the beginning. The next step will be a push for a congressional law on the subject, however unconstitutional that would be.

For Republicans and conservatives, on the other hand, the denationalization of abortion policy is a model for what they should be promoting in other policy areas. Moving issues the Constitution doesn’t assign to the federal government back to the state capitals represents more than good policy and fidelity to the Constitution. For Republicans and conservatives, it’s also very good politics.